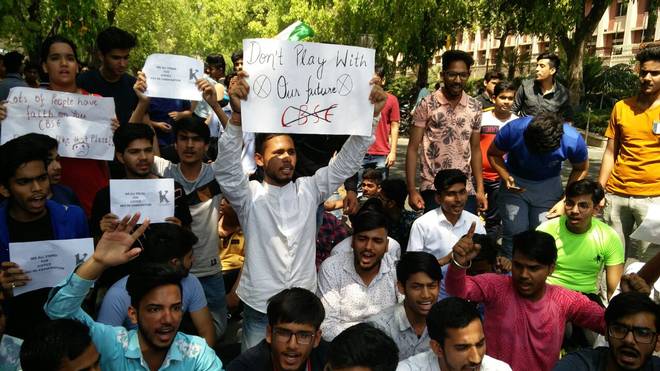 Hours after students protested outside CBSE office in New Delhi claiming to have the ‘leaked’ Hindi paper, CBSE chairperson Anita Karwal rubbished the rumours on Saturday saying the paper has not leaked. The CBSE chief told that it was the compartment paper of 2017. “This is definitely a mischief. Group of students protesting outside CBSE claim to have it, they are circulating it too”. The Hindi exam is on April 2.

The latest development comes amid the entire hullabaloo around the CBSE paper leak and re-exam announcement, with students all across the country venting their anger through protests and petitions. Moments after the Board announced its decision to hold re-exams for class 12 and 10 economics and mathematics paper, students were shocked and dismayed with the prospect of studying once again for the exams, attending tuitions, paying fees, et al.

Earlier, students from different schools in the Capital held a protest at Jantar Mantar to seek “justice” while Delhi Police said its crime branch has questioned 34 persons, including five coaching centre tutors and students, in connection with the alleged leak. They carried posters with messages such as, “It is not students who need a re-test, it is the system”, “CBSE needs to be held accountable, CBSE fail, no-retest”.

“I did not leak the paper, why am I being held responsible for it?” said Adiba Kaleenir, 15, a Class 10 student of St Thomas School, who took part in the protest.

Today also, a group of students staged a demonstration near the CBSE office at Preet Vihar, Delhi against the leak “The students tried to block the road in front of the CBSE office, but we kept them away. A group of about 25-30 students are protesting outside the CBSE office,” said a senior Delhi Police officer.

First person: ‘With the CBSE leaks, I have lost my faith in the system,’ writes a Class 10 student