Working With the Text (Page 50) Answer the following questions.

Q2. When and why did she go to the U.S? Who did she marry? (2, 3)
Ans: Kalpana went to the U.S. for higher studies in aeronautical engineering. There she married the flight instructor Harrison.

Q3. How did she become an astronaut? What gave her the idea that she could be an astronaut? (3)
Ans: Kalpana had already got a bachelor’s degree in aeronautical engineering before she went to the U.S. She earned her Ph.D. in aerospace engineering. In 1994 she was selected by NASA for training as an astronaut. She was encouraged by the people around her.

Q4.What abilities must an astronaut have, according to the journalist? (6)
Ans: An astronaut needs to know a lot about biology and aeronautical engineering. He/ she must have wide knowledge of science subjects.

Q5. Describe Kalpana Chawla’s first mission in space. (5)
Ans: Kalpana’s first mission in the space shuttle, Columbia, was nearly 16 days long. She went around the earth 252 times. Among her colleagues were a Japanese and a Ukranian astronauts. They performed so many experiments.

Q2.Use these phrases in sentences of your own, after finding out their meanings.
1.broke apart
2. streaked over
3. spread across
4.lifted off
5. blast off
6. went on
7.cheered along
8.on board
9. carry on
Ans:
1. broke apart – (parted, separated): The two wheels of my bicycle broke apart suddenly.
2.streaked over – (left a thin line or work): The jet plane streaked over our house high in the sky.
3.spread across – (became widely known or felt): The flu spread across the whole locality.
4.lifted off – (rose from the launching site): The helicopter lifted off the helipad with only two passengers.
5.blast off – (take off noisily): The spaceship blasted off at 2.30 a.m. sharp.
6.went on – (continued): The discussion went on the whole night.
7.cheered along – (encouraged): All the runners were cheered along by their fans.
8.on board – (inside the plane): The huge ship had nearly 500 passengers on board.
9.carry on – (continue doing something): She decided finally to cany on with her boss.

Q2. Be sure to thank your partner when he/she wishes you in turn. You may also look up a telephone directory, or go to a post office, and get a list in English and Hindi of standard phrases that can be sent in greeting telegrams anywhere in India. Dis­cuss which of these you might use, and when. Compare the English and Hindi phrases for expressing good wishes. Do you know such phrases in any other lan­guage?
Ans:

Q1. Do you have a ‘dream’ or something you very much wish to do? Write a para­graph saying what you want or wish to do. Then say (in another paragraph) how you think you can make your dream come true.
Ans: Dreaming is a common and natural activity of the mind when we are asleep. But the word ‘dream’ also means ambition, a keen desire in life. In that sense, I have a modest dream. I wish to qualify for the medical profession. To me, a doctor ranks next to God as protector of life. He provides relief to the crying patients. He cures diseases. He helps a patient recover from illness, and be happy and live a full life. I wish to be a doctor to help the poor patients, to bring smile on their faces.
I know that my dream is not easy to realise. I need not only a brilliant mind but also the means to pay for my studies. Nevertheless I am determined to pursue my goal. I hope to do well in the entrance examination. As for the financial help, I will get it from some bank.

Q2. Given below are some words that are spelt differently in British and American English. Fill in the blanks accordingly. 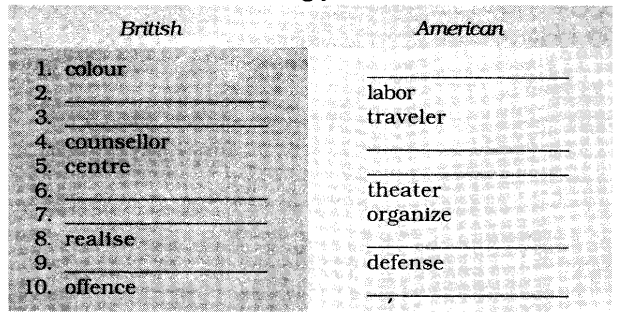 Q2. What is a space shuttle? Name the shuttle which took Kalpana in space.
Ans: Space shuttle is a spacecraft. It can be used for space travel more than once. It is unlike a rocket. Kalpana took in space the shuttle named Columbia.

Q3. How did Kalpana Chawla meet her end? When did this tragedy in space take place?
Ans: Kalpana Chawla went up in a space shuttle along with six other astronauts. On Saturday, February 1, 2003 the shuttle Columbia broke apart. All the seven on board were killed.

Q4. What do you know about Kalpana Chawla’s education? How did she become an American citizen?
Ans: Kalpana Chawla graduated from Tagore School. She got a Bachelor of Science degree in aeronautical engineering. She then went to the USA to earn her Ph.D. She became a naturalised U.S. citizen after her marriage with Harrison, an American.

Q5.What do you learn about Columbia from the lesson you have read? What was its final fate?
Ans: Columbia was a space shuttle. It carried Kalpana and six other astronauts. It went up in flames over Texas on return journey. On February 1, 2003 all the seven on board lost their lives.

Q6.‘Kalpana Chawla was a heroine’. How did a journalist support his statement?
Ans: Kalpana was a heroine. She was bom in the small town of Karnal. But she was a genius. She became an astronaut. She had encyclopaedic knowledge of so many subjects. She made a great achievement.

Q1. What do you know about Kalpana Chawla’s birth, education, great achievement and tragic end?
Ans: Kalpana Chawla was bom in Kamal, Haiyana. She got a degree in aeronautical engineering in India and earned her doctorate in the USA. She made a historic achievement when she blasted off from Florida in a space mission. She became a naturalised American citizen after her marriage with an American flight instructor, Harrison. She met her tragic end on February 1, 2003 when Columbia broke apart and caught fire. All the seven members on board met a tragic end.

Q2. The story of Kalpana Chawla has become an inspiration for millions of young Indians. How? What message did she send from the space shuttle to students of her college?
Ans: Kalpana Chawla, an Indian-American woman, made history when she went up in a space shuttle Columbia. It had a great achievement but she met with a tragic end. Columbia went up in flames and she lost her life.In a message she sent from Columbia to students of her college in Chandigarh she told them that with courage they too can fulfil their dreams. She wished them all a great journey.