Q1. Why did the children go to Yasmin Khala’s house?
Ans: The children broke the street-light while playing cricket. As its replacement was beyond their reach, they were very much upset. They didn’t know whom did the street light belong to. They went to Rehana’s mother who gave them the knowledge that it is the Municipal Corporation of the city that takes care of replacing lights. She also told them that Yasmin Khala would be the best person because she has just retired from the Municipal Corporation. She advised the children to go to Yasmin Khala to get their problem solved.

4. What did Gangabai do and why?
Ans: Gangabai and other women of her locality were very much unhappy to find garbage lying all over the street and spreading foul smell. One day she said that it is the Ward Councillor who they should go to and protest since they are the ones who elected him. She gathered a small group of women and went to his house to get their problems solved.

Q5. How does the Municipal Corporation earn the money to do its work?
Ans: The Municipal Corporation is one of the most important organs of the three-tier government system. It is responsible for all round development of its designated area. It undertakes all the public facilities and welfare works like sanitation, water, road, education, health, etc. As these works require fund, so it collects revenue from the residents living in its corporation area. It levies taxes on property, water and other services. Taxes are fixed on the measurement and consumption of the services. Taxes are levied on education and other amenities like owning a hotel, entertainment etc. 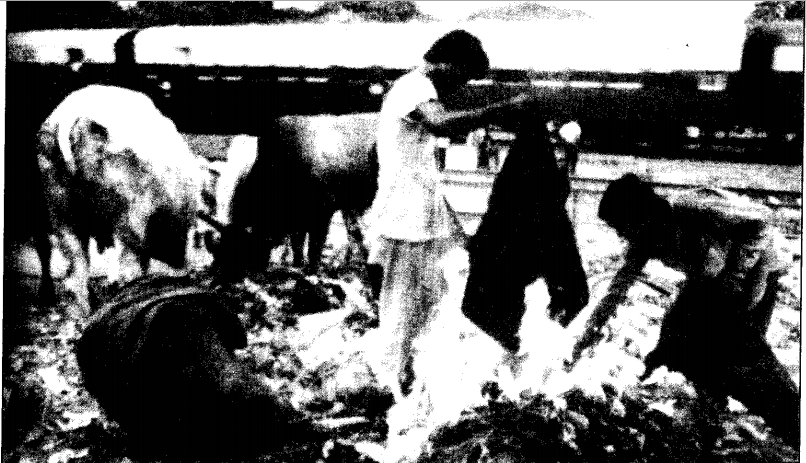 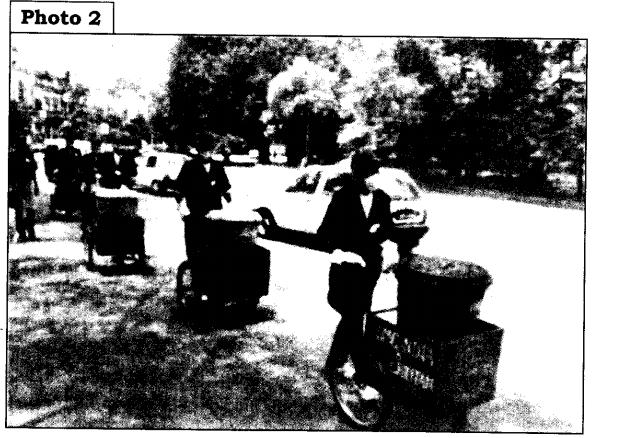 Ans: (i)The way shown in photo 2 provides safety to the person disposing garbage,
(ii) Collecting garbage in the manner shown in photo 1 is full of dangers. Children are so close to open garbage that they may fall sick or they may develop symptoms of some deadly disease in the long run. There may be pieces of broken glasses. While collecting garbage in,this manner, their fingers may
get injured. We see two stray cows around the garbage searching some eatables. These cows may attack these boys which may take their lives. Thus, there is no safety at all in this way.
(iii) The proper ways of disposing garbage are not available to those who work in municipalities because firstly, the government has not done proper arrangement for this as yet. It has provided trucks no doubt but their number is not sufficient. Secondly, the workers working in the municipalities are generally less aware of health and hygeine. They do not bother whether garbage is being disposed properly or not. Thirdly, the economic condition of the municipalities is not good.

Choose the correct option to complete the statement given below.

(iv) Which one is not the job of the Municipal Corporation?
(a)It keeps the streets and markets clean.
(b)It makes gardens and maintains them.
(c)It builds hotels for the tourists
(d)It runs schools, hospitals and dispensaries.
(v) The Municipal Council is found in
(a)Big cities (b) Small towns
(c) villages (d) Metropolitan cities.
Ans: (i)—(d), (ii)—(a), (iii)—(c), (iv)—(c), (v)—(b).

Fill in the blanks with appropriate words to complete each sentence:
(i)Property taxes form only ……………. percent of the money that a Municipal Corporation earns.
(ii) Collecting garbage is quite a………… job.
(iii) The kabadi wallah plays a major role in ………………. household plastic and paper.
(iv) The Ward Councillor is elected by the people of his ………………
(v) Gangabai rushed to the house of………………
Ans:  (i) 25-30 (£i) dangerous
(iii) recycling (iv) Ward/area (v) Ward Councillor.

State whether these sentences are true (T) or false (F).
(i) Gangabai was a timid lady.
(ii) Yasmin Khala was a retired judge.
(iii) Pune, being a big city, has a Municipal Corporation.
(iv) Larger houses have to pay less taxes.
(v) The Commissioner and the administrative staff implement the decisions taken by the Councillor’s Committees and the councillors.
Ans. (i)—F, (ii)—F, (iii)—T, (iv)—F, (v)—T.

Q2. What had children done to the street light?
Ans: They had broken the streetlight while playing.

Q3. What did children want to know?
Ans: They wanted to know whom did the lights on the streets belong to.

Q5. Who takes decisions like where a park or a new hospital should go?
Ans: The Ward Councillors usually takes such decisions.

Q11. How can common people keep their streets clean?
Ans: They can do this by keeping dustbin/dustbins at home.

Q1. How are complicated decisions taken? Explain with examples. [V. Imp.]
Ans: (Complicated decisions usually affect the entire city and therefore these decisions are taken by groups of Councillors who form committees to decide and debate issue. For example, if bus stands need to be improved or a crowded market place needs to have its garbage cleared more regularly, etc.

Q2. Write a short note on the topic ‘Sub-contracting’. [Imp.]
Ans: In recent times, in order to save money the Commissioners of several municipalities across the country had hired private contractors to collect and process garbage. This is known as Sub-Contracting. This means that the work that was earlier being done by government workers is now being done by a private company or agency. These contract workers get low salary and their jobs are temporary.