(e) On 21st March and September 23rd, direct rays of the sun fall on the equator. At this position, neither of the poles is tilted towards the sun. Therefore, the entire earth experiences equal days and equal nights. This phenomenon is called an equinox.
(f) Since it is winter in the Southern Hemisphere when it is summer in the Northern Hemisphere, therefore the position of the earth ‘which is called the Winter Solstice in one Hemisphere is the Summer Solstice in the other, and vice-versa.
(g) The axis of the earth is tilted, due to which the sun continuously either shines or cannot be seen for a long time here. Although the earth rotates and day changes into night and night into day at other places, but the poles remain under the same stage for a much longer time due to the tilt.

Fill in the blanks with appropriate words to complete each sentence: .
(i) Days and nights occur due to …………… of the earth.
(ii) Only half of the earth gets light from the sun at a time due to its……………. shape.
(iii)The period of rotation is known as the ……………..
(iv) The sun’s rays fall vertically at the Tropic of…………….. on 22nd December.
(v) On ………… it is autumn season in the Northern Hemisphere and spring in the Southern Hemisphere.
Answer: (i) rotation (ii) spherical
(iii) earth day (iv) Capricorn (v) 23rd September.

Stale whether these sentences are true (T) or false (F).
(i) The axis of the earth makes an angle of 23V& with its orbital plane.
(ii) Every five year, February is of 29 days instead of 28 days.
(iii) Season changes due to the change in the position of the earth around the sun.
(iv) When there is summer in the Northern Hemisphere, it is spring in the Southern Hemisphere.
(v) Life is not possible in extreme conditions.
Answer: (i) False, (ii) False, (iii) True, (iv) False, (v) True.

Q2. Which motion of earth is associated with the changes in season?
Answer: Revolution.

Q3. Why do seasons change? [V. Imp.]
Answer: Seasons change due to the change in the position of the earth around the sun.

Q4. Why do the areas near the poles receive less heat?
Answer: It is because the rays of the sun are slanting on the poles.

Q5. When do the longest day and the shortest night occur in the Northern Hemisphere?
Answer: On 21st June.

Q1. What would happen if the earth did not rotate? Imp.]
Answer: In such a condition the portion of the earth facing the sun would always experience day, and thus there would be continuous warmth in the region. At the same time the other half would always remain dark and be freezing cold all the time. These are extreme conditions which are not suitable for life. Thus, we can say that if the earth did not rotate life would not have been possible.

Q2. How does leap year occur? [V. Imp.]
Answer: The earth takes 36514 days Le. one year to complete one revolution around the sun. We consider a year as consisting of 365 days only and ignore six hours for our convenience. Six hours saved every year are added to make one day Le. 24 hours over a span of four years. This surplus day is added to the month of February. Thus every fourth year, February of 29 days instead of 28 days. Such a year with 366 days is called a leap year.

Q3. Explain the following with a diagram:
(a) Summer solstice (b) Winter solstice (c) Equinox. 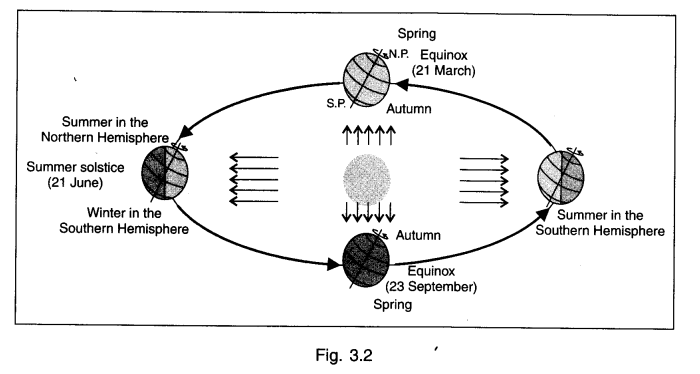 Answer: (a) Summer solstice. The Northern Hemisphere is tilted towards the sun on 21st June. As the rays of the sun fall directly on the Tropic of Cancer, these areas receive more heat. But the areas size to the poles receive less heat due to the slanting rays of the sun. The North Pole is inclined towards the sun the places beyond the Arctic Circle experience continuous daylight for about six months. Since a large area of the Northern Hemisphere is getting light from the sun, it is summer in the regions north of the equator. The longest day and the shortest night at these places occur on 21st June. These cAnditions are reversed in the Southern Hemisphere at this time. It is winter season there having longer nights and shorter days. This position of the earth is known as the summer solstice.
(b)Winter solstice. On 22nd December, the Tropic of Capricorn receives direct rays of the sun as the South Pole tilts towards it. As the sun’s rays fall vertically at the Tropic of Capricorn, a larger portion of the Southern Hemisphere gets light. Hence, the Southern Hemisphere enjoys summer having longer days and shorter nights. This position of the earth is called the winter solstice.
(c)On 21st March and 23rd September direct rays of the sun fall on the equator. At this position, neither of the poles is tilted towards the sun. As result, the entire earth experiences equal days and equal nights. This phenomenon is known as an equinox.