Q1. Answer the following questions briefly.
(a) Name the major physical divisions of India.
(b) India shares its land boundaries with seven countries – Name them.
(c) Which two major rivers fall into the Arabian Sea?
(d) Name the delta formed by the Ganga and the Brahmaputra
(e) How many States and Union Territories are there in India? Which states have a common capital?
(f) Why do a large number of people live in the Northern Plains?
(g) Why is Lakshadweep known as a coral island?
Answer:
(a) Major physical divisions of India:
(i) The Himalayas (ii) The Northern Indian Plains (iii) The Great Indian Desert (iv) The Peninsular Plateau ‘ (v) The Coastal plains (vi) The two groups of Islands.
(b)Pakistan, Nepal , Bhutan, China, Bangladesh, Sri Lanka and Afghanistan.
(c)The rivers Narmada and Tapi fall into the Arabian Sea.
(d)The Sundarbans delta.
(e)There are 28 states and 9 Union Territories in India. Punjab and Haryana have a common capital, i.e. Chandigarh.
(f)The Northern Plains are generally flat and level land, having alluvial deposits laid down by the rivers such as the Indus, the Ganga, the Brahmaputra and their tributaries. These river plains provide fertile land for cultivation. Hence, a large population prefer to live here.
(g)Lakshadweep is made of corals which are skeletons of tiny marine animals called polyps.

Choose the correct option to complete the statements given below:
(i) The USA has …………
(a) Two time zones (b) Four time zones
(c) Seven time zones (d) Eight time zones. 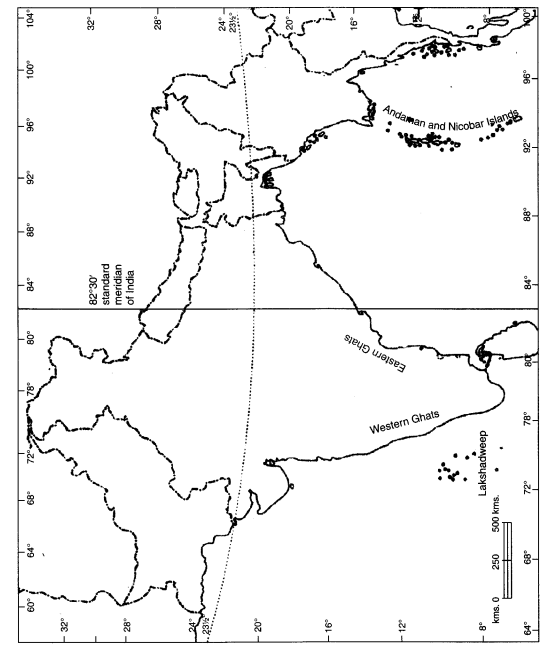 Fill in the blanks with appropriate words to complete each sentence:
(i) India is the second most populous country of the world after …………………..
(ii) The Himalayan mountains are divided into …………… main parallel ranges.
(iii) The Great Indian desert lies to the ……………. part of India.
(iv) …….. and ……….. are west-flowing rivers that fall into the Arabian Sea.
(v) Lakshadweep islands are located in the ………………..
(vi) The western coastal plains are very……………….
Answer: (i)China (ii)three
(iii)Western (iv)Narmada, Tapi
(v) Arabian Sea (vi) narrow.

State whether these sentences are true (T) or false (F).
(i) Lakshadweep islands are coral islands.
(ii) The eastern coastal plains are much broader.
(iii) The Northern Indian plains lie to the south of the Himalayas.
(iv) The Bay of Bengal lies east to India.
(v) Canada has five time zones.
(vi) High concentration of population is found in plateaus.
Answer: (i) True, (ii) False, (iii) True, (iv) True, (v) False, (vi) False.

Q5. On what basis have the states been formed?
Answer: The states have been formed on the basis of languages,

Q6.What does Himalayas mean?
Answer: Himalaya means the abode of snow (Him + alaya).

Q8. What is a peninsula?
Answer: A peninsula is a piece of land surrounded by water on all the three sides,

Q9. Define the term desert.
Answer: A desert is a dry, hot and sandy stretch of land with very little vegetation,

Q10. Name the two important hill ranges that lie in the peninsula plateau
Answer: The Vindhyas and the Satpuras.

Q14. Name the rivers which fall into the Bay of Bengal?
Answer: Mahanadi, Godavari, Krishana and Kaveri.

Q1. Mention the political and administrative divisions of India. [V. Imp.]
Answer: India is a vast country. Hence, for administrative purposes, it is divided into 28 states and 9 Union Territories. Delhi is the capital of India. The formation of states has been made on the basis languages. Rajasthan is the largest state while Goa is the smallest state in terms of area. These states have been further divided into districts.

Q4. How are coral islands formed? [V. Imp.]
Answer: Corals are skeletons of very small marine animals called polyps. When the living polyps die, their skeletons are left. Other polyps grow on top of the hard skeleton which grows higher and higher, thus forming the coral islands.

Q5. What do you know about the boundaries of India? Explain in brief. [V. Imp.]
Answer: Our country has a vast geographical expanse. In the north, it is bound by the lofty Himalayas. In the west, lies the Arabian Sea, in the east it is bound by the Bay of Bengal and in the south lies the Indian’ Ocean.

Q6.Describe the geographical extent of India. [V. Imp.]
Answer: India has an area of about 3.28 million sq. Km. The north-south extent from Kashmir to Kanyakumari is about 3,200 km. And the east-west extent from Arunachal Pradesh to Kuchchh is about 2,900 km. The lofty mountains, the Great Indian Desert, the Northern Plains, the uneven plateau surface and the coasts and islands present a diversity of landforms.

Q8. Describe the effect of east-west extent of India on time.
Answer: The west to eats extent leads to difference in local time from meridian to meridian. The local time changes by four minutes for every one degree of longitude. The sun rises two hours earlier in the east, Le. Arunachal Pradesh than in the west, ie. (Gujarat). The local time of longitude of 82° 30′ E has been taken as the Indian Standard Time. This longitude is also known as the Standard Meridian of India. Its time is taken as the standard throughout the country.

Q1. Describe the major physical division of India. [V. Imp.]
Answer: India has a diverse physical features, such as mountains, plateaus, plains, coasts and islands.
1.The Himalayas. The Himalayas stand sentinels in the north. The Himalayas mountains are divided into three main parallel ranges. The northernmost is the Great Himalaya or Himadri. The world’s highest peaks are located in this range. Middle Himalayas or Himachal lies to the south of Himadri. The Shiwalik is the southernmost range.
2.The Northern Indian Plains. They lie to the south of the Himalayas. They are usually level and flat. These are fertile regions and are suitable for cultivation. Thick population is found here.
3.’ The Great Indian Desert. It lies to the western part of the country. It is a sandy stretch of land. Rainfall is very poor, hence very little vegetation is found here.
4.The Peninsular Plateau. It is triangular in shape. It lies to the south of northern plains. Its relief is highly uneven. Numerous hill ranges and valleys are found here. Aravali hills lie to the north-west side. The Vindhyas and the Satpuras are other important ranges. The Narmada and Tapi flow through these ranges. These west-flowing rivers fall into the Arabian Sea. On the west of the plateau lie the Western Ghats also known as Sahyadris. On the east lie the Eastern Ghats. This plateau is rich in minerals like coal and iron ore.
5.Coastal Plains. They lie to the West of the Western Ghats and East of the Eastern Ghats. The rivers Mahanadi, Godavari, Krishna and Kaveri (all east flowing rivers) fall into the Bay of Bengal. They have formed fertile deltas at their mouth. <
6.Islands. Two groups of islands are integral part of the country. Lakshadweep islands are located in the Arabian Sea while Andaman and Nicobar islands lie to the South-east of the Indian mainland in the Bay of Bengal. 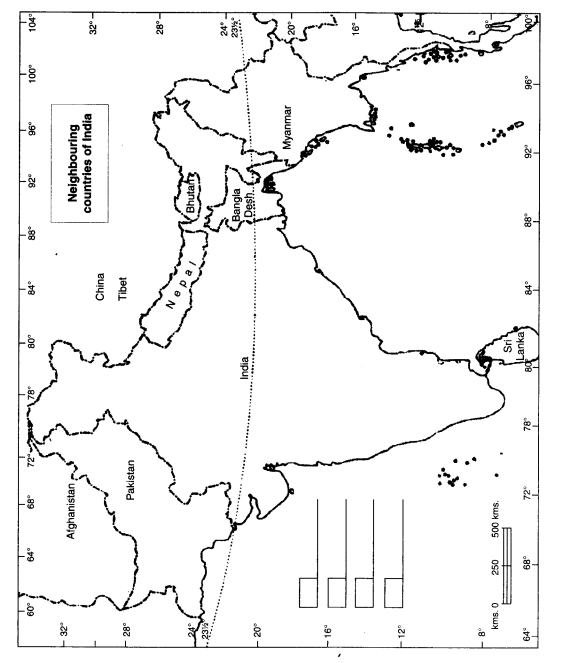 Q2. On an outline political map of India, show all the states and union territories.
Answer: 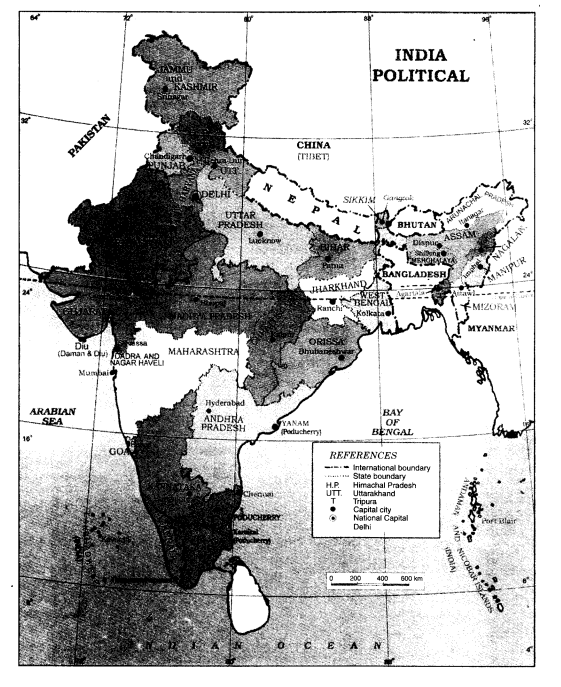