Q3. Why do archaeologists think that many people who lived in Mehrgarh were hunters to start with and that herding became more important later?
Answer: On excavation, archaeologists have found bones of wild animals in the lowermost levels. On upper levels, they found cattle bones. This means that hunting wild animals was important much before herding was.

Q4. State whether true or false?
(a)Millets have been found at Hallur.
(b)People in Burzahom lived in rectangular houses.
(c)Chirand is a site in Kashmir.
(d)Jadeite, found in Daojali Hading, may have been brought from China
Answer: (a) True, (b) False, (c) False, (d) True.

Q1. Why do farmers grow some crops in some areas/ and not in other areas?
Answer: Farmers do this because different plants grow in different conditions.

Q5. What did people do to store grains?
Answer: People made large clay pots or wove baskets, or dug pits into the ground.

Q6. Name some important sites where archaeologists have found evidence of farmers and herders.
Answer: These sites can be found in the north-west, in present-day Kashmir and in east and South India.

Q9. What were pit-houses and where have they been found?
Answer: Pit-houses were built by people by digging into the ground, with steps leading into them. They have been found in Burzahom.

Q10. Name two Neolothic tools which are used to grind grain even today.
Answer: Mortars and pestles are Neolithic tools used even today for grinding grain.

Q12. Give one feature houses in Mehrgarh.
Answer: Houses at Mehrgarh were usually square or rectangular.

Q13. Why were people buried with animals, like goats?
Answer: Dead people were buried with goats, which were supposed to serve as food after death.

Q1. How did people become farmers? [V. Imp.]
Answer: When the climate of the world was changing, people observed places where edible plants are found, about seeds, plants, etc. They started growing their own plants. And thus, they became farmers.

Q2. How did people become herders?
Answer: People saw that they could attract and tame animals by leaving food for them. The first animal to be tamed was the ancestor of dog. They started rearing sheep, goat, cattle, etc. People often protected these animals from attacks by other wild animals. This is how the people became herders.

Q3.Name some sites o f settlement of farmers and herders and also the grains found there.
Answer:

Q4.Describe tools used by farmers and herders. [V. Imp.]
Answer: Stone tools have been found from many sites. They are often different from the Palaeolithic tools and are called ‘Neolithic’. There were tools that were polished so as to give a fine cutting edge, and mortars and pestles were used for grinding grain and other plant produce. However, Palaeolithic tools were still used for some purposes. Some tools were also made of bone.

Q1. How did the changing climate affect the life of humans? [V. Imp.]
Answer: The climate of the world had major changes around 12,000 years ago. There was a shift to relatively warm conditions. Grasslands developed in many areas. Plants and animals also developed in the meantime. Humans observed the places where edible plants were found, they wondered how seed broke off stalks, fell on the ground, and new plants sprouted from them. They became farmers due to these changes.
They also learnt how to get the attention of animals by taming them and proriding them food. People tamed the wild ancestor of the dog. They also started rearing sheep, goat, cattle, etc. and this made them herders. Grasslands had allowed many animals which lived on grass to grow in number.

Q2. Describe the site of Mehrgarh.
Answer: Mehrgarh is a site located in a fertile plain, near the Bolan Pass, one of the most important routes into Iran. It was one of the first places where people grew barley and wheat, and reared sheep, and goat. In fact, it is one of the earliest known villages.
Archaeologists have found evidence of animal bones here on excavation. They have found remains of houses here. Most houses were square or rectangular. They usually had four or more compartments, some of which may have been used for storage. Several furial sites have also been found in Mehrgarh. 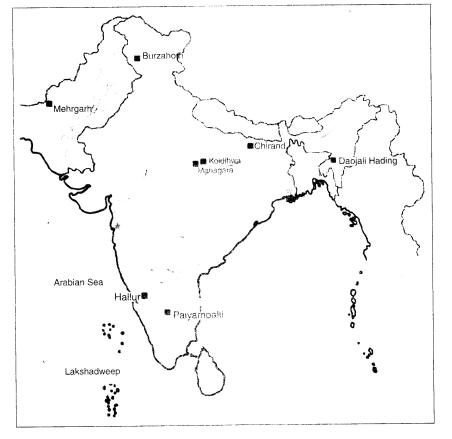