Q2 :How are computers useful in processing the accounting data?
Answer :
Data processing is a process of collecting, storing, summarising, analysing and interpreting the data and facts so as to represent reliable information for efficient and effective decision making. Data processing, in short, is a transformation of raw data into useful information. Computer system plays a very important role in processing the accounting data. Data processing requires a mechanism to store data content in a manner that allows easy and convenient retrieval of data as and when required. This can be easily done with the help of computers by designing suitable database for accounting. Moreover, computers also help in eliminating the duplication of data. Unlike the manual accounting system, computers are not subject to tiredness, boredom or fatigue, therefore; the reliability of data processed by computers is very high. Besides reliability, computers can process data at comparatively higher speed and with great degree of precision and accuracy.

Q3 :What do you understand by accounting data? Discuss the stages through which it is finally transformed for being presented as information in financial statements.
Answer :
Accounting data refers to the facts and financial data contained in journals, ledgers, financial statements and other books of accounts. That is, accounting data pertains to the financial data recorded in the books of accounts.
The procedure through which the accounting data is transformed for being presented as information in financial statements is known as data processing. Data processing is a process of collecting, storing, summarising, analysing and interpreting the data and facts in such a manner so as to fetch reliable information for efficient and effective decision making. The following are the various stages that are involved in transformation of data into information so as to present in the financial statements.
1. Collecting Data from the Source Documents- First of all, data is collected from the source documents such as payment slips, receipt slips, etc. for preparing vouchers. The preparation of vouchers is the basis for recording the accounting data in a systematic and chronological (date-wise) manner.
2. Input Data- A suitable database is designed to enter the accounting data contained in the vouchers. This is done with the help of pre-designed Data Entry Form. This form is similar to the physical voucher form.
3. Data Storage- Data storage is created for storing the input of data. It involves structuring the database which is used for recording the accounting data. Following is the format of blank data record

4. Manipulation of Data- This stage involves transformation of the stored data to generate final reports.
5. Output of Data- It means representing the accounting reports such as Journals, Ledger, Trial Balance, Financial Accounts, etc. as useful information. The accounting users can obtain these reports just by accessing the transformed data. This stage basically implies generation of final reports in a pre-designed format.

Q4 :What do you understand by database? How does it differ from DBMS?
Answer : Database is a collection of inter-related data, events and transactions. It is organised in a particular manner and provide access to the various users simultaneously. In this system, data is gathered and stored for a particular operation.
The following are the two important properties of a database.
1. Shared Property- The database is a combination of related data that can be accessed by the people who have authority to access it and to meet their different information needs.
2. Integrated Property- The database is arranged in such a manner so as to avoid and eliminate duplication of data.
On one hand, database are used for storing accounting data, whereas, on the other hand, DBMS is that software which helps in creating, developing and maintaining the database. It is a system that provides easier access to data recorded in the database. It handles a huge amount of data and defines, organises and transforms the database for different functions as per the need. Hence, it can be said that DBMS facilitates access to the database.

Q10 : Define foreign key. How is this concept useful in relational data model? Illustrate with suitable example.
Answer :  A foreign key is defined as a key that refers to a primary key column of another table. In other words, it is a field in a relational table that matches the primary key of another table. These keys relate different tables together in order to form an integrated database. For example, let us consider the two following tables- STUDENT table and BOOKS ISSUED table. The STUDENT table includes all the student data and the BOOKS ISSUED table includes all the books issued by the students from the school library. The basic objective here is that all the books issued must corresponds to the students that are listed in the STUDENT table. In order to do this, we need to place a foreign key in the BOOKS ISSUED table and need to relate it to the primary key of the STUDENT table.

The Join of STUDENT table and BOOKS ISSUED table appears as:

Q11 :What is meant by NULL value? What are the reasons that lead to their occurrence in database relations?
Answer :
The absence of a data item which is represented by a special value is known as NULL value.
The following are the reasons that lead to its occurrence in the database relations.
(i) When a particular attribute does not apply to an entity
(ii) When the existing value of an attribute is unknown
(iii) When the value is unknown because it does not exist

Q12 :Why are duplicate tuples not allowed in a relation?
Answer :
Tuple refers to a row in a table that represents a set or collection of related data values. It corresponds to the relationship which represents entity type as a set of tuples, where each tuple is an ordered list of values corresponding to attributes of relation. As each tuple represents a distinct data record entity, so no two tuples in a relation (i.e. a table) can have the same combination of values for all their data items. Moreover, if a new tuple is added in the relation, then it should not reflect the existing data-values, otherwise, it will violate the uniqueness constraint and the relation as a whole will not have a minimal super-key.

Q1 :Discuss the basic concepts of Entity Relationship (ER) Model. Illustrate as to how an ER model is diagrammed.
Answer :   Entity Relationship (ER) data model is proposed by Perter Pin-Shan Chen in 1976. This model is developed using DBMS to frame an application database. The ER model is a generalisation of old hierarchal and network approach models. This model describes data in terms of the following elements.
Entities
Attributes
Relationship between entities
These major elements of ER model are used to express a real world situation (reality) for which a database is to be designed. The database structure using the ER model can be shown diagrammatically with the help of ER diagrams. There are different symbols that are used to represent different types of entities, attributes, identifiers and relationships. 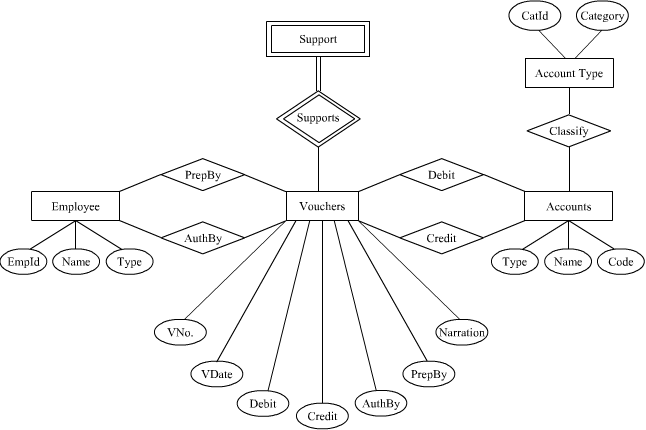 The following section describes the procedure to transform ER model into Relational Data Model.
1. Creation of Relation for Every Strong Entity
A separate relation that includes all the simple attributes is to be created for each strong entity type in the ER schema. A primary key out of these attributes is chosen arbitrarily for easy and unique identification of the strong entity. For example, in the above ER design, Employee, Vouchers, Accounts and Account Type are the strong entities as they have primary key which is one of their unique attributes. These attributes are shown in the ovals and are attached to their respective entity type by the straight lines.
Separate relation is created for each strong entity. This is represented as:
Employee (EmpId, Name, Type)
Vouchers (VNo, SNo. Narration)
Accounts (Type, Name, Code)
Accounts Type (CatId, Category)

2. Creation of Relation for each Weak Entity Type
Weak entities do not have their own identities and are identified through the identifying relationship. So, we can say that every weak entity has its own entity that helps in its identification. A separate relation that includes the attributes is to be created for each weak entity. The primary key of this new relation is the combination of its unique attributes, along with the primary key attribute of the owner relation. For example, Support entity is the weak entity as it does have its own primary key; Voucher is the owner entity of Support entity.
Support entity has a partial key which is SNo Assigned to each document. Therefore, VNo, the primary key of the vouchers along with SNo is designed as composite key for the Support entity. The relation so formed can be represented as:
Support (VNo, SNo, dName sDate)

So, based on the diagram, the following two relations can be formed as: