Q1 : Answer the following questions.
(i) Why do the plates move?
(ii) What are exogenic and endogenic forces?
(iii) What is erosion?
(iv) How are flood plains formed?
(v) What are sand dunes?
(vi) How are beaches formed?
(vii) What are ox-bow lakes?

(i)The Lithospheric plates move around because of the movement of the molten magma inside the Earth.

(iii)Erosion is the weathering or wearing away of the landscape by different agents like wind, water and ice.

(v)In deserts, when wind blows, it lifts and transports sand from one place to another. When it stops blowing, the sand particles fall and get deposited in low hill-like structures called sand dunes.

(vii)An ox-bow lake is a crescent-shaped lake formed by a meandering river. During its journey through a plain, a river twists and turns to form meanders. Erosion and deposition occur constantly along the sides of a meander, thereby causing the ends of its loop to come closer and closer. In due course of time, the meander loop cuts off from the river and forms a cut-off, crescent-shaped ox-bow lake.

(iii) Which is caused by the sudden movements of the Earth?
(a) Volcano

Q4 : Give reasons.
(i) Some rocks have a shape of a mushroom.
(ii) Flood plains are very fertile.
(iii) Sea caves are turned into stacks.
(iv) Buildings collapse due to earthquakes.

Answer :
(i) In deserts, one can see rocks in the shape of a mushroomâ€”with a narrower base and a wider top. These are known as mushroom rocks. Such rocks are formed when the winds erode the lower section of a rock more than the upper part.
(ii) Flood plains are formed as a result of the depositional activity of rivers. Rivers carry along with them eroded material like fine soil and sediments. When it overflows its banks, it deposits the eroded material and causes flood plains to be formed. The deposited material makes the land fertile.
(iii) Stacks are formed as a result of the erosional activity of the sea waves. When sea waves continuously strike rocks, cracks develop in them. As these cracks become larger and wider, hollow caves get formed on the rocks. These are called sea caves. As the waves keep striking the rocks, the cavities become bigger and bigger, with only the roof remaining at the end. Such structures are known as sea arches. Further erosion breaks the roof, and only walls remain. These wall-like features are known as stacks. Thus, sea caves are ultimately converted into stacks.
(iv) Earthquakes are the sudden vibrations caused within the Earth’s surface as a result of the movement of the Lithospheric plates. Such vibrations, when they are of a high intensity, cause damage to the things on the Earth’s surface. Various human-made (e.g., buildings) and natural (e.g., trees) constructions can break down and collapse under the effect of the vibrations because they are situated on the Earth’s surface.

Q5 : Activity.
Observe the photographs given below. These are various features made by a river. Identify them and also tell whether they are erosional or depositional or landforms formed by both.

Q6 : For fun.
Solve the crossword puzzle with the help of given clues. 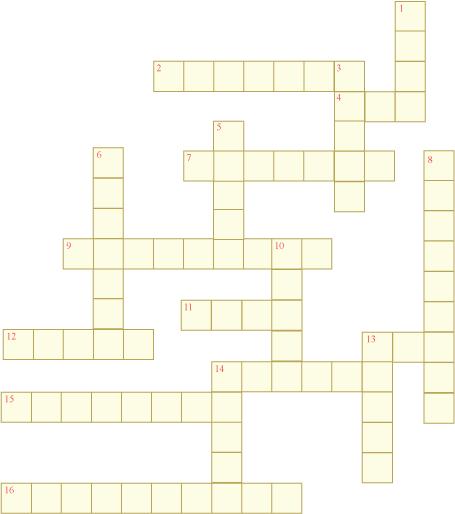 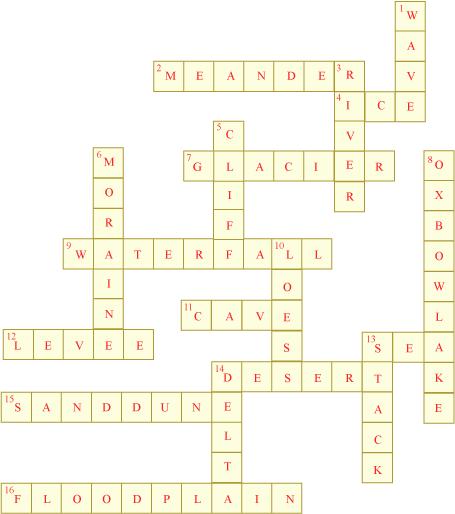