Answer :
(a) Burning of wood and coal causes __pollution__of air.
(b) A liquid fuel used in homes is __liquefied petroleum gas (LPG)_.
(c) Fuel must be heated to its __ignition temperature__ before it starts burning.
(d) Fire produced by oil cannot be controlled by __water__.

Q3 : Explain how the use of CNG in automobiles has reduced pollution in our cities.
Answer :
Combustion of fuels like petroleum causes formation of un-burnt carbon particles along with carbon monoxide gas. These harmful pollutants enter the air and cause respiratory diseases. Compressed Natural Gas (CNG) produces these harmful products in very less quantity. It is a comparatively cleaner fuel. Therefore, the use of CNG has reduced pollution in our cities.

Q4 : Compare LPG and wood as fuels.
Answer :
Wood has been a traditional fuel for both domestic and industrial use. However, it produces a lot of smoke that can cause respiratory problems. Also, wood is obtained from trees. Thus, using wood as a fuel causes deforestation. Therefore, slowly wood is replaced by LPG, which is a liquefied form of petroleum gas. It does not give out smoke and other pollutants and is a cleaner fuel. Again, fuel efficiency of LPG is more than that of wood. The calorific value of LPG is 55000 kJ / kg, while that of wood is between 17000 to 22000 kJ / kg. Hence, LPG is favoured over wood.

Q5 : Give reasons.
(a) Water is not used to control fires involving electrical equipment.
(b) LPG is a better domestic fuel than wood.
(c) Paper by itself catches fire easily whereas a piece of paper wrapped around an aluminium pipe does not.
Answer :
(a) Water is a good conductor of electricity. If it is used for controlling a fire involving electrical equipments, then the person dousing the fire might get an electric shock. Also, water can damage electrical equipments.
(b) LPG is a better domestic fuel as it does not produce smoke and un-burnt carbon particles, which cause respiratory problems.
(c) A piece of paper wrapped around aluminium pipe does not catch fire easily. This is because aluminium, being a metal, is a good conductor of heat. Therefore, heat is transferred from the paper to the metal and the paper does not attain its ignition temperature.

Q6 : Make a labelled diagram of a candle flame.
Answer : 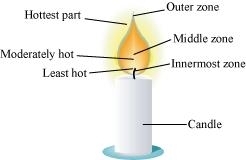 Q11 : Can the process of rusting be called combustion? Discuss.
Answer :
Combustion is a chemical process in which a substance reacts with oxygenand gives out energy during the process in the form of either heat or light or both. Rusting of iron is an exothermic process as heat is released during rusting. Hence, it is a kind of slow combustion.

Q12 : Abida and Ramesh were doing an experiment in which water was to be heated in a beaker. Abida kept the beaker near the wick in the yellow part of the candle flame. Ramesh kept the beaker in the outermost part of the flame. Whose water will get heated in a shorter time?
Answer :
The water in the Ramesh’s beaker will heat up in a shorter time. This is because the outermost zone of a flame is the hottest zone, while the yellow zone (in which Abida had kept the beaker) is less hot.