White light is a composition of seven colours. These are violet, indigo, blue, green, yellow, orange and red, collectively known as VIBGYOR. Spectrum of white light consists of sever colour bands. Each band consists of some range of wavelengths or frequencies.
For orange colour : (590 nm to 620 nm)
For red colour: (620 nm to 780 nm)

Colour of light will depend only on the frequency of light and not on the wavelength of the light. So, light will appear red to an observer under water.

To receive TV signals transmitted from Delhi in Patna directly, one has to use antennas of great height, which will cost much. On the other hand, transmission of signals with the help of satellites requires only high frequency waves and can be done easily.

Young’s double slit experiment can be performed with sound waves, as the sound waves also show interference pattern. To get a reasonable “fringe pattern”, the separation of the slits should be of the order of the wavelength of the sound waves used.
In this experiment, the bright and dark fringes can be detected by measuring the intensity of sound using a microphone or any other detector.

The interference pattern can be produced by any two coherent waves moving in the same direction. It cannot be concluded from the interference phenomenon that light is a transverse wave, as sound waves that are longitudinal in nature also interfere.

In order to get interference, the sources should be coherent, i.e. they should emit wave of the same frequency and a stable phase difference. Two candles that are placed close to each other are distinct and cannot be considered as coherent sources. Two independent sources cannot be coherent. So, two different laser sources will also not serve the purpose.

The violet filter will allow only violet light to pass through it. Now, if the double slit experiment is performed with the white light and violet light, the fringe pattern will not be the same as obtained by just using white light as the source. To have interference pattern, the light waves entering from the slits should be monochromatic. So, in this case, the violet light will superimpose with only violet light (of wavelength 400 nm) in such a way that the bright bands will be of violet colour and the minima will be completely dark.

(c) both a particle and a wave phenomenon

Light shows photoelectric effect and Compton effect, which depicts its particle nature. It also shows interference and diffraction, which depicts the wave nature of light.

(d) neither on elasticity nor on inertia

The speed of light in any medium depends on the refractive index of that medium, which is an intensive property. Hence, speed of light is not affected by the elasticity and inertia of the medium.

Light consists of mutually perpendicular electric and magnetic fields. So, the equation of a light wave is represented by its field vector.

Frequency of a light wave, as it travels from one medium to another, always remains unchanged, while wavelength decreases.

Frequency of a light wave doesn’t change on changing the medium of propagation of light.

Among the given sources, laser is the best coherent source providing monochromatic light with constant phase difference.

Wave travelling from a distant source always has plane wavefront.

Interference effect is produced by a thin film ( coating of a thin layer of a translucent material on a medium of different refractive index which allows light to pass through it))In the present case, oil floating on water forms a thin film on the surface of water, leading to the display of beautiful colours in daylight because of the interference of sunlight.

Hence, the required refractive index is 1.25.

Total intensity coming from the source is I0 which is present at the central maxima. In case of two slits, the intensity is getting distributed between the two slits and for a single slit, the amplitude of light coming from the slit is reduced to half which leads to 1/4th of intensity.

On the introduction of a transparent sheet in front of one of the slits, the fringe pattern will shift slightly but the width will remain the same.

(a) the fringe width will decrease

(a) in vacuum
(c) in a material medium

Light is an electromagnetic wave that can travel through vacuum or any optical medium.

(b) Speed of light in water is smaller than its speed in vacuum.
(c) Light shows interference.

Snell’s Law, which states that the speed of light reduces on moving from a rarer to a denser medium, can be concluded from Huygens’ wave theory and interference of light waves is based on the wave properties of light.

Light is an electromagnetic wave that propagates through its electric and magnetic field vectors, which are mutually perpendicular to each other, as well as to the direction of propagation of light. The average value of both the fields is zero.

Huygen’s wave theory explains the origin of points for the new wavefront proceeding successively. It also explains the variation in speed of light on moving from one medium to another, i.e. it proves Snell’s Law.

In any other medium, the speed of light is given by v=c/η, where η is the refractive index of the medium and according to Doppler effect, for an observer moving towards the source ,speed of light appears to be more than the other two cases. On the other hand, it will be least when the observer is moving away from the source.

​The wave is travelling along the X-axis. So, it’ll have planar wavefront perpendicular to the X-axis.

(b) consecutive fringes will come closer

(a) The central fringe will be white.
(b) There will not be a completely dark fringe.
(d) The fringe next to the central will be violet.

The superposition of all the colours at the central maxima gives the central band a white colour. As we go from the centre to corner, the fringe colour goes from violet to red. There will not be a completely dark fringe, as complete destructive interference does not take place.

The waves are travelling with the same frequencies and varying by constant phase difference.

Hence, the wavelength of light used for the experiment is 400 nm.

Hence, the adjacent bright bands in the interference pattern are 1.47 mm apart.

(b) For zero intensity at the centre of the fringe pattern, there should be distractive interference at the centre.
So, the optical path difference should be = λ2
i.e. μ-1 t=λ2⇒t=λ2 μ-1

Hence, 14.5 fringes will cross through the centre if the paper is removed.

Hence, the required wavelength of the monochromatic light is 589.2 nm.

Hence, fringe-width of the pattern formed on the screen is 0.90 mm.

Let the two slits are S1 and S2 with separation d as shown in figure. 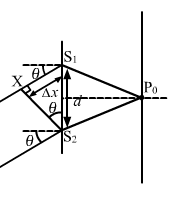 (a) The phase of a light wave reflecting from a surface differs by ‘π’ from the light directly coming from the source. 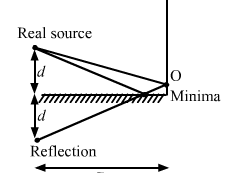 (b) Here, separation between two slits is 2d.
Wavelength of the light is λ.
Distance of the screen from the slit is D.
Consider that the bright fringe is formed at position y. Then,
path difference, ∆x=y×2dD=nλ.
After reflection from the mirror, path difference between two waves is λ2.
⇒ y×2dD=λ2+nλ For first order, put n=0.⇒y=λD4d 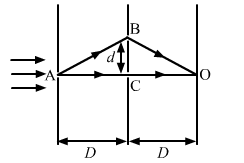 Let P be the point of minimum intensity.

For minimum intensity at point P,

Thus, Z=7λ 12 is the smallest distance for which there will be minimum intensity. 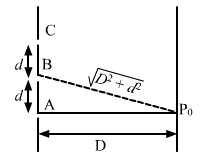 Given:
Separation between the two slits = d
Wavelength of the light = λ
Distance of the screen = D
(a) When the intensity is half the maximum:
Let Imax be the maximum intensity and I be the intensity at the required point at a distance y from the central point.
So, I=a2+a2+2a2cosϕ
Here, ϕ is the phase difference in the waves coming from the two slits.
So, I=4a2cos2ϕ2⇒IImax=12⇒4a2cos2ϕ24a2=12⇒cos2ϕ2=12⇒cosϕ2=12⇒ϕ2=π4⇒ϕ=π2
Corresponding path difference, ∆x=λ4⇒y=∆xDd=λD4d

(b) When the intensity is one-fourth of the maximum:

Given:
Separation between two slits = d
Wavelength of the light = λ
Distance of the screen = D
Let Imax be the maximum intensity and I be half the maximum intensity at a point at a distance y from the central point.
So, I=a2+a2+2a2cosϕ
Here, ϕ is the phase difference in the waves coming from the two slits.
So, I=4a2cos2ϕ2
⇒IImax=12⇒4a2cos2ϕ24a2=12⇒cos2ϕ2=12⇒cosϕ2=12⇒ϕ2=π4⇒ϕ=π2Corrosponding path difference, ∆x=14⇒y=∆xDd=λD4d
The line-width of a bright fringe is defined as the separation between the points on the two sides of the central line where the intensity falls to half the maximum.
So, line-width = 2y
=2Dλ4d=Dλ2d

Thus, the required line width of the bright fringe is Dλ2d.

Given:
Separation between the two slits = d
Wavelength of the light =λ
Distance of the screen = D
The fringe width (β) is given by β=λDd.
At S3, the path difference is zero. So, the maximum intensity occurs at amplitude = 2a.
(a) When z=Dλ2d:
The first minima occurs at S4, as shown in figure (a).
With amplitude = 0 on screen ∑2, we get:
lmaxlmin=2a+022a-02=1 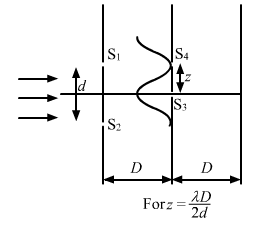 (b) When z=Dλd:
The first maxima occurs at S4, as shown in the figure. 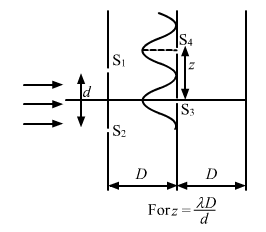 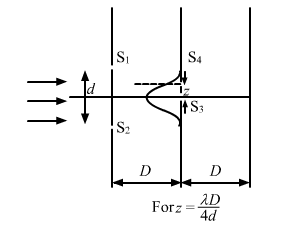 The slit S4 falls at the mid-point of the central maxima and the first minima, as shown in the figure.

Given:
Fours slits S1, S2, S3 and S4.
The separation between slits S3 and S4 can be changed.
Point P is the common perpendicular bisector of S1S2 and S3S4. 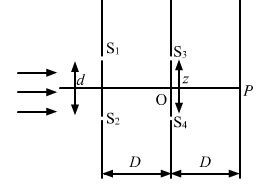 (a) For z = λDd :
The position of the slits from the central point of the first screen is given by
y=OS3=OS4=z2=λD2d
The corresponding path difference in wave fronts reaching S3 is given by
∆x=ydD=λD2d×dD=λ2
Similarly at S4, path difference, ∆x=ydD=λD2d×dD=λ2
i.e. dark fringes are formed at S3 and S4.
So, the intensity of light at S3 and S4 is zero. Hence, the intensity at P is also zero.

Therefore, the index of refraction of the soap solution is 1.32.

Hence, the diameter 2R of the central bright spot on the wall is 1.37 cm.