Answer: 1
The absolute motion has no meaning. In the relative motion view, the two viewpoints are the same. Hence, both viewpoints are equally correct or equally wrong.

Answer: 2
Constant velocity means that a particle has the same direction and speed at every point. So, its average velocity and instantaneous velocity are equal. Its speed being a scalar quantity is equal in magnitude only.

Answer: 3
No, as the directions of the cars are different, their velocities are not equal, as velocity is a vector quantity.
We cannot compare velocities on the basis of direction only, so the question is irrelevant.

Answer: 5
Motion of a projectile at the highest point of its path: Because at this point, the projectile has only horizontal component of velocity. So, it can have velocity towards west and acceleration in the vertically downward direction.

Answer: 6
A projectile has the lowest speed at the highest point of its path because the vertical component of velocity is zero at this point.

From the velocity–time graph, we have:
Distance covered by

Answer: 8
Acceleration does not mean speeding up or speeding down. It means the change of velocity either in direction or in magnitude.

Answer: 12
The displacement of the ball and the player is the same, as the initial and final points are the same.

Answer: 13
Yes, it is possible to accelerate a car without putting more petrol or less petrol in the engine. This can be done by driving the car on a circular or curved track at a uniform speed.

It is towards southwest, as shown in the figure. 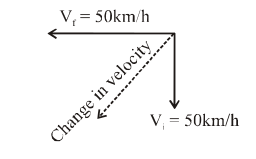 Answer: 2
(d) The particle moves at a constant velocity up to a time t0 and then stops.
The slope of the x–t graph gives the velocity. In the graph, the slope is constant from t = 0 to t = t0, so the velocity is constant. After t = t0, the displacement is zero; i.e., the particle stops.

Answer: 3
(d) The information is insufficient to decide the relation of xA with xB.
As velocity and acceleration are in opposite directions, velocity will become zero after some time (t) and the particle will return.
∴0=u-at ⇒t=

Because the value of acceleration is not given, we cannot say that the particle will return after/before 10 seconds.

Velocity is uniform in both cases; that is, acceleration is zero.
We have:
d1=v1t and d2=v2t
Total displacement, d=d1+d2
Total time, t=t+t=2t
∴ Average velocity,

Velocity is uniform in both cases; that is, acceleration is zero.

Answer: 6
(d) g downward
Gravity is the only force acting on the stone when it is released. And, we know that gravity is always in the downward direction.

Answer: 9
(c) Both will reach simultaneously.
Because the downward acceleration and the initial velocity in downward direction of the two bullets are the same, they will take the same time to hit the ground and for a half projectile.
Time of flight =

Answer: 11
(d) The information is insufficient to decide the relation of RA with RB.
Horizontal range for the projectile,

Information of the initial velocity is not given in the question.

Along the string, the velocity of each object is the same.

Answer: 3
(a) Average speed of a particle in a given time is never less than the magnitude of the average velocity.
(b) It is possible to have a situation in which

(d) In one complete circle of uniform motion, average velocity is zero. Instantaneous velocity is never zero in the interval.

(b) If the position and velocity have opposite signs, the particle moves towards the origin. It can be explained by following figure:

Answer: 7
(a) The magnitude of the velocity of a particle is equal to its speed.
(a) Velocity being a vector quantity has magnitude as well as direction, and magnitude of velocity is called speed.
(b) Average velocity =

For the shown time (t = 6 s), the displacement of the particle is positive. Therefore, the average velocity is positive.

Answer: 10
(d) The acceleration of S2 with respect to S1 may be anything between zero and 8 m/s2.
Explanation:

Displacement from the house to the field = 50 m in the direction north to east.

(b) Average speed of the bus, Savg=

(b) Because he returns to his house, the displacement is zero. So, the average velocity is zero.

Slope of the v–t graph gives the acceleration.

(a) Slope of the v–t graph gives the acceleration.

(b) Slope of the x–t graph gives the velocity.

As the displacement is zero, the average velocity is zero.

Hence, the time is 12 seconds.

Answer: 12
At position B , the instantaneous velocity of the particle has the direction along

.
Average velocity between A and B, Vav=

We can see that

=30 m/s
When the train is accelerating with an acceleration of 2 m/s2:
Distance, 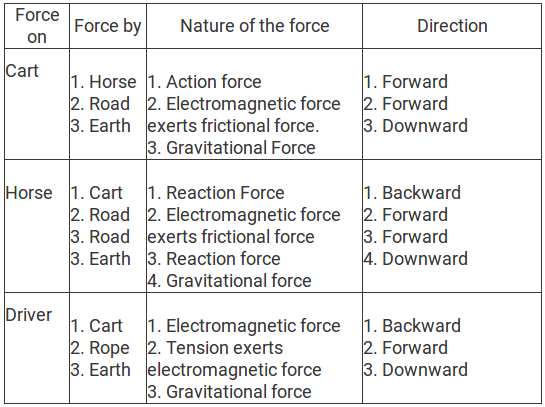 Answer: 24
Given:
Height of the balloon from the ground, s = 60 m
Balloon is moving upwards with velocity 7 m/s.
The balloon and the ball are moving upwards with the same speed.
When the ball is dropped, its initial velocity (u) is −7 m/s.
Acceleration due to gravity, a = g = 9.8 m/s2
Using the equation of motion, we have:
s=ut+

We will ignore the −ve sign in the above equation because time can never be negative.
∴t=

On putting respective values, we get:
s=

=40 m
(b) Total time taken by the stone to reach the maximum height:
t=

Answer: 26
A person is releasing balls from a tall building at regular intervals of one second.
It means for each ball, the initial velocity u is 0.
Acceleration due to gravity, a = g = 9.8 m/s2
When the 6th ball is dropped, the 5th ball moves for 1 second, the 4th ball moves for 2 seconds and the 3rd ball moves for 3 seconds.
Position of the 3rd ball after t = 3 s:
Using the equation of motion, we get:
s3=ut+

(b) Horizontal range of the ball:

Vertical distance covered by the football:

Answer: 35
Given:
Distance between the golis of the first and second players = 2.0 m = R = Horizontal range
Height h from which the goli is projected by the second player = 19.6 cm = 0.196 m
We know that the goli moves in projectile motion.
Acceleration due to gravity a = g = 9.8 m/s2
The time in which the goli will reach the ground is given by the equation of motion.
As the initial velocity uy in vertical direction is zero, we have:

Let us assume that the goli is projected with horizontal velocity ux m/s.

The horizontal range is given by
R = uxt

Hence, if the second player projects the goli with a speed of 10 m/s, then his goli will hit the goli of the first player.

Therefore, the minimum speed with which the motorbike should be moving is 32 ft/s.

Answer: 37
Given:
Height (h) of the cliff = 171 ft
Horizontal distance from the bottom of the cliff = 228 ft
As per the question, the person throws the packet directly aiming to his friend at the initial speed (u) of 15.0 ft/s.

From the diagram, we can write:
tan θ=

∴ θ = 37°
When the person throws the packet from the top of the cliff, it moves in projectile motion.
Let us take the reference axis at point A.
u is below the x-axis.
a = g = 32.2 ft/s2 (Acceleration due to gravity)
Using the second equation of motion, we get:
y=usinθT+

Answer: 38
Given:
Initial speed of the ball, u = 15 m/s
Angle of projection with horizontal, α = 60°
Distance of the wall from the point of projection = 5 m
a = g = 9.8 m/s2 (Acceleration due to gravity)
We know that the horizontal range for a projectile is given by

Consider the projectile motion in the figure given below.

at2
Time of flight of the projectile:

Distance between the accelerated car and the projectile:
s’-s=

Thus, the minimum horizontal velocity of the ball is 2 m/s.

Answer: 43
Given:
Velocity of the truck = 14.7 m/s
Distance covered by the truck when the ball returns again to the truck = 58.8 m
(a) Therefore, we can say that the time taken by the truck to cover 58.8 m distance is equal to the time of the flight of the truck.
Time in which the truck has moved the distance of 58.8 m:

We consider the motion of the ball going upwards.
T = 4 s
Time taken to reach the maximum height when the final velocity v = 0:

Vertical displacement of the ball:

Therefore, when seen from the road, the speed of the ball is 25 m/s and the angle of projection is 53° with horizontal.

From the figure, we have:

Let α be the angle made by the boat sailing with respect to the direction of flow.

b) Using Pythagoras’ theorem, we get:

Hence, the required time is 10 minutes.

Answer: 48
Given:
Width of the river = 500 m
Rate of flow of the river = 5 km/h
Swimmer’s speed with respect to water = 3 km/h
As per the question, the man has to reach the other shore at the point directly opposite to his starting point.
From
Horizontal distance is BD for the resultant velocity vr.
x-component of the resultant velocity, R = 5 – 3 cos θ
Vertical component of velocity = 3sinθ km/h

This is the same as the horizontal component of velocity.
Thus, we have:

For H (horizontal distance) to be minimum, dHdθ=0

be the resultant direction of the plane to reach point B. 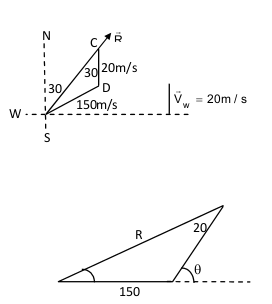 Direction of the aeroplane is sin-1115 east of line AB.
(b) Time taken by the plane to reach point B from point A:

Putting the value of v in the above equation, we get:

Here, the time taken by light to reach B is neglected.
∴ Time lag between seeing and hearing = Time taken to hear the sound of the drum

Answer: 52
A regular hexagon has a side a. Six particles situated at the corners of the hexagon are moving with a constant speed v.
As per the question, each particle maintains a direction towards the particle at the next corner. So, particles will meet at centroid O of triangle PQR. Now, at any instant, the particles will form an equilateral triangle PQR with the same centroid O.
We know that P approaches Q, Q approaches R and so on.
Now, we will consider the motion of particle P. Its velocity makes an angle of 60˚.
This component is the rate of decrease of distance PO.
Relative velocity between P and Q:

Hence, the time taken by the particles to meet each other is 2av.