Answer:  It is given that point R is lying somewhere in between P and Q. Therefore all these points are lying on the same line segment

. Hence, for every situation in which point R is lying in between P and Q, it may be said that PQ =PR + RQ.
For example,

is a line segment of 6 cm and R is a point between P and Q , such that it is 2 cm away from point Q. We can find that the measure of line segment PR⎯ comes to 4 cm. Hence, relation PQ =PR + RQ is verified.

Question 5: Verify, whether D is the midpoint of

Question 6: If Q is the midpoint of

and R is the midpoint of 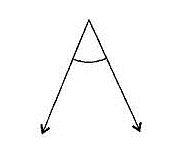 Question 2: State whether the following are True or False:

Question 4: Using protractor measure the given and note them down. 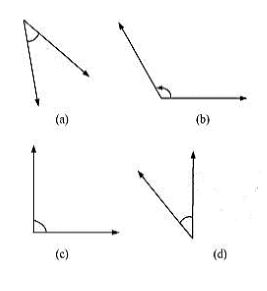 Question 5:  Measures the largest angle and find their angles.

Question 6:  Measure the largest angle and find their angles.

Answer: The angles measure 750 and 700.
Hence, the first angle is greater. 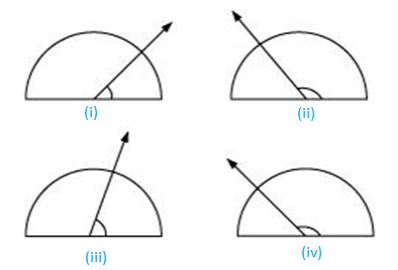 Question 9: What is the angle between the two hands of the clock?

Question 10: The measure of the angle is 450. Looking through a magnifying glass, does the angle becomes larger? Do the size increases?

Answer:  The angle does not change.

Question 11: Measure and identify the following: 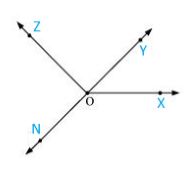 be the perpendicular to the line segment

intersect in the point A. What is the measure of ∠PAY ?
Answer: 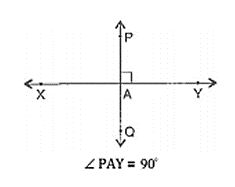 Question 3: Find out the measures of the angles that are formed by using two set-squares that are present in geometry box? Is there any angle measure that is common?
Answer:  The angles present in the first set-square are 450, 900, 450 and another set-square has 600, 900, 300. The common angle between them is 900.

Question 4: Analyze the diagram. The line l is perpendicular to line m.

(a) Is line CE equal to EG?
(b) Does PE cut CG in two equal halves?
(c)Find out the line segment which are perpendicularly bisected by PE
(d) Identify whether true or false? (i) CD=GH (ii)BCFG
Answer:
(a) Yes, the measure of both is 2 units.
(b) Yes, because CE=EG
(c)

Question 3: Given below are the triangles, Name them in two different ways-: 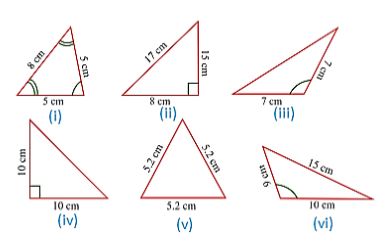 Question 4: Try out constructing triangles by using matchsticks as shown below. 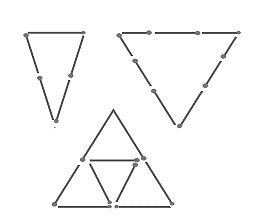 (iii) For 5 matchsticks An acute angle triangle is formed with the help of 5 matchsticks because in this case the sum of the two sides is greater than the third side.

(iv) For 6 matchsticks  An acute angle triangle is formed with the help of 6 matchsticks because in this case the sum of the two sides is greater than the third side.

(i) A square also follow the properties of a rectangle as its opposite sides are equal also all the angles are right angled.

(ii) A rectangle also have its opposite sides equal as well as parallel.

(iii) In a rhombus all the sides are equal also diagonals are perpendicular to each other. And square have the same property.

(iv) All the above shapes are having four sides each.

(v) A square also have its opposite sides equal as well as parallel.

Question 3: In a regular figure all the angles should be equal and all the sides in the figure need to be same. Identify among the given figures which of them are regular quadrilateral.
Answer: A square is a quadrilateral.

Question 1: Identify whether the given shapes are polygons. If not, give reasons?

Question 3: Give a sketch of a regular hexagon. Connecting its vertices, and by drawing a triangle. Identify the type of the triangle you have drawn.
Answer:  123456 is a regular hexagon and triangle thus formed by joining 165 is an isosceles triangle. 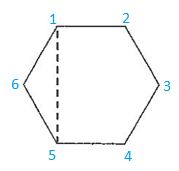 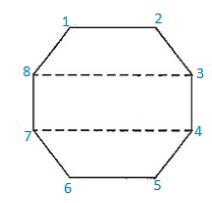 Question 5: The line segment from the diagonal joins the any of two vertices in the polygon and is not in the side of the given polygon. Give rough sketch pentagons by drawing its diagonals.
Answer: 12345 is the required pentagon and its diagonals are 1 4, 1 3, 2 5 and 2 4. 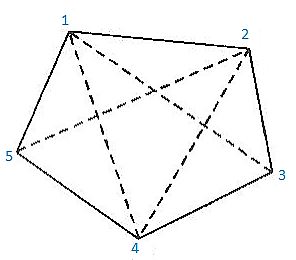