Therefore, the pressure would be 0.8 bar.

Where,
m Ã¢-Mass of gas
M Ã¢-Molar mass of gas
But

Molar mass (M) of a gas is always constant and therefore, at constant temperature

Hence, at a given temperature, the density (d) of gas is proportional to its pressure (p)

Q4 :At 0°C, the density of a certain oxide of a gas at 2 bar is same as that of dinitrogen at 5 bar. What is the molecular mass of the oxide?
Answer :
Density (d) of the substance at temperature (T) can be given by the expression,
d =

Where, M1 and p1 are the mass and pressure of the oxide respectively.
Density of dinitrogen gas (d2) is given by,

Where, M2 and p2 are the mass and pressure of the oxide respectively.
According to the given question,

Hence, the molecular mass of the oxide is 70 g/mol.

From equation (ii), we have

Where, MA and MB are the molecular masses of gases A and B respectively.
Now, from equations (iii) and (iv), we have

(Since total pressure is 3 bar)
Substituting these values in equation (v), we have

Thus, a relationship between the molecular masses of A and B is given by

Therefore, 203 mL of dihydrogen will be released.

Total pressure exerted by the mixture can be obtained as:

It is known that,

Now, let the partial pressure of O2 in the vessel be.
p1V1=p2

The density (d2) of the gas at STP can be calculated using the equation,

Hence, the required temperature is 50 K.

Hence, the time taken would be

According to the question,

and the number of moles of dioxygen,

Hence, the partial pressure of dihydrogen is 0.8 bar.

Q21 :In terms of Charles’ law explain why -273°C is the lowest possible temperature.
Answer :
Charles’ law states that at constant pressure, the volume of a fixed mass of gas is directly proportional to its absolute temperature. 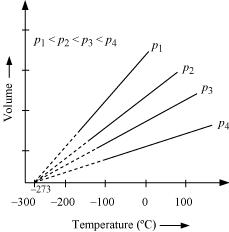 It was found that for all gases (at any given pressure), the plots of volume vs. temperature (in °C) is a straight line. If this line is extended to zero volume, then it intersects the temperature-axis at – 273°C. In other words, the volume of any gas at -273°C is zero. This is because all gases get liquefied before reaching a temperature of – 273°C. Hence, it can be concluded that – 273°C is the lowest possible temperature.