Q1 :A measure of dispersion is a good supplement to the central value in understanding a frequency distribution. Comment.
Answer : The study of the averages is only one sided distribution story. In order to understand the frequency distribution fully, it is essential to study the variability of the observations. The average measures center of the data whereas the quantum of the variation is measured by the measures of dispersion like range, quartile deviation, mean deviation and Standard Deviation. For example, if a country has very high income group people and very low income group people, then we can say that the country has large income disparity.

Q4 :In a town, 25% of the persons earned more than Rs 45,000 whereas 75% earned more than 18,000. Calculate the absolute and relative values of dispersion.
Answer :
Absolute Value of Dispersion

Q5 :The yield of wheat and rice per acre for 10 districts of a state is as under: 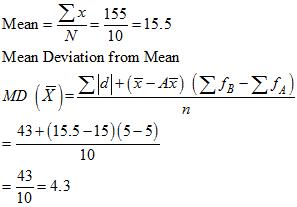 Since n is even

(vi) Coefficient of Variation
a. Wheat

(vi) Rice crop has greater variation as the coefficient of variation is higher for rice as compared to that of wheat.

Q6 :In the previous question, calculate the relative measures of variation and indicate the value which, in your opinion, is more reliable.
Answer :
(i) Coefficient of Range
a) Wheat

(iii) Coefficient of Mean Deviation from mean
a) Wheat 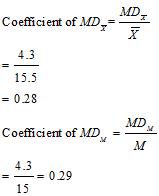 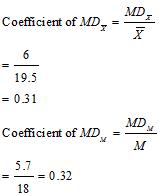 (iv) Coefficient of Variation
a) Wheat

Q7 : A batsman is to be selected for a cricket team. The choice is between X and Y on the basis of their scores in five previous tests which are:

Which batsman should be selected if we want,
(i) a higher run getter, or
(ii) a more reliable batsman in the team?
Answer:
Batman X 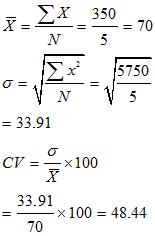 Q8 : To check the quality of two brands of light bulbs, their life in burning hours was estimated as under for 100 bulbs of each brand.

Answer:
For Brand A 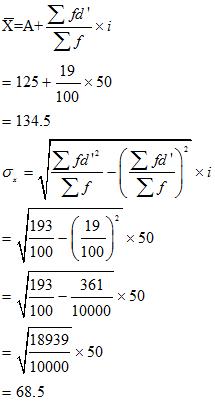 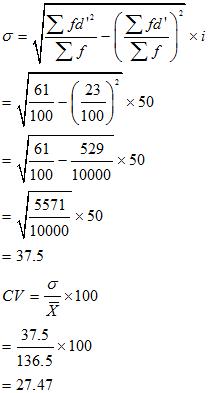 Q10 :If in the previous question, each worker is given a hike of 10% in wages, how are the Mean and Standard Deviation values affected?
Answer :
Average wage = Rs 200