Q1 : Explain the concept of motivation.
Answer : The concept of motivation focuses on the explanation of the causes of behaviour. The term motivation has been derived from the Latin word ‘movere’, which refers to the movement of activity. The everyday behaviour is explained in terms of motives. For instance, earning money is the motive behind going to work. Though there can be other reasons too. Similarly, the motive behind attending school/college is getting good education or acquiring a degree so that one can get a good job. Motivation also makes prediction about behaviour, and thus it is one of the determinants of behaviour.

Q2 : What are the biological bases of hunger and thirst needs?
Answer : The biological bases of hunger and thirst needs are those which are indicated by events inside and outside the body.
Every organism has needs that produce drive and stimulate behaviour. It leads to certain actions towards achieving certain goals and reducing the drive.
The stimuli for hunger include stomach contractions, low concentration of glucose in the blood, nerve impulses sent by liver to the brain and external factors like aroma, taste and appearance of food.
Thirst occurs due to deprivation of water that leads to loss of water from cells and tissues of the body, drying of the mouth and subsequently causes dehydration. The anterior hypothalamus contains osmoreceptors that generate nerve impulses as a signal for thirst and drinking in case of cell dehydration. 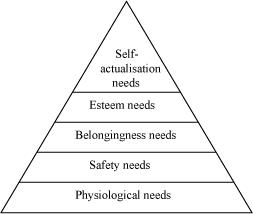 he pyramid starts at the bottom with the basic physiological needs like hunger, thirst etc. A person will only be in a position to obtain other needs when his/her basic needs are fulfilled.

The next stage represents the need to feel safe and secured in the physical and psychological sense. For example, home or any shelter that fulfils the need to be safe physically.

Belongingness needs are related to the desire of the individual to be a part of a group, in order to have a collective consciousness. For example, being a part of family fulfils the need of belongingness and love.

The esteem need arises during the stage where the individual wants to develop a sense of self-worth. For example, holding a position of authority adds to the self-esteem of a person.

The need for self-actualisation occurs when a person is motivated to fully develop his/her potential. It is manifested through awareness, responsiveness, creativity etc. An instance of the same can be when an individual attempts to learn new things in the middle of his/her career.

Q6 :Is it important to consciously interpret and label emotions in order to explain them? Discuss giving suitable examples.
Answer : Yes, it is important to consciously interpret and label emotions in order to explain them as the expression of emotions varies from culture to culture. There are some basic emotions that are common to all cultures and yet there are other emotions that are culture specific. The identification and experience of emotions also vary across cultures and display rules exist to modify the intensity of expression of emotions. For example, the Tahitian language has 46 labels for anger that may be used in different contexts. The North Americans can produce up to 40 different facial expressions for anger while the Japanese have 10 labels for various facial expressions of happiness and 8 levels to express anger. While some emotions like love, anger, grief and wonder are deemed to be universal and present across Indian, Chinese and Western cultures, other emotions like surprise, contempt and shame are not considered as basic to everyone and the degree of their presence varies individually as well as culturally.

Therefore, it is important to interpret and label emotions in order to understand and explain them.

Q7 : How does culture influence the expression of emotions?
Answer :  Culture influences the expression of emotions by shaping the gestures that vary among different societies. Facial expressions are the most common form of expressing emotions. While interaction, the Latin Americans and Southern Europeans direct their gaze to the interactant, Asians, on the other hand, prefer a peripheral gaze. Gesture and proximal movement are shaped to convey emotions non-verbally and are variable from culture to culture. For example, a handclap in China is an expression of worry or disappointment, whereas, anger is expressed by laughter. Silence is also seen as culturally bound. In India, silence is sometimes used to express deep emotions while it may convey embarrassment in Western countries.

Q8 : Why is it important to manage negative emotions? Suggest ways to manage negative emotions.
Answer :  It is important to manage negative emotions because negative emotions act as an obstruction towards viewing things clearly and taking rational decisions. For instance, anxious individuals find it difficult to concentrate or to make decisions even for small matters. Negative emotions also affect the psychological and physical health of an individual and may result in decreased ability to think or concentrate, and loss of interest in personal or social activities. Thus, managing emotions effectively is integral to effective social functioning.
The ways to suggest negative emotions are:
(i) Enhancing self-awareness and being creative.
(ii) Appraising the situation objectively, without bias or preconceptions.
(iii) Self monitoring by constant evaluation of accomplishments and various experiences.
(iv) Engaging in self modelling by evaluating one’s best performance and using them as inspiration.
(v) Perceptual reorganisation and cognitive restructuring.
(vi) Developing and nurturing good relations and having empathy for others
(vii) Participating in community service.