Q1 : For each of the given solid, the two views are given. Match for each solid the corresponding top and front views. 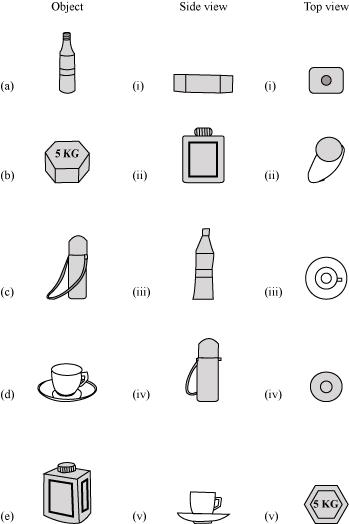 Answer :
The given solids, matched to their respective side view and top view, are as follows.
Object Side view Top view

Q2 : For each of the given solid, the three views are given. Identify for each solid the corresponding top, front and side views. 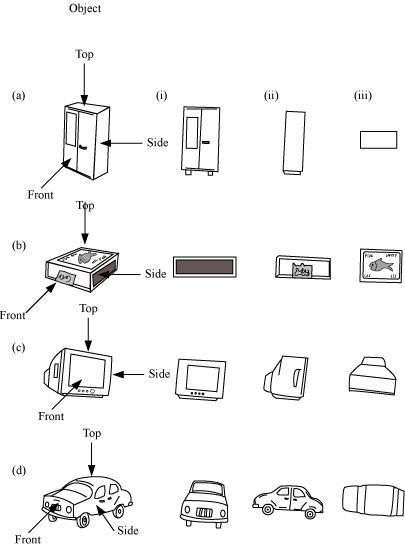 Q3 : For each given solid, identify the top view, front view and side view.
(a)

Q4 : Draw the front view, side view and top view of the given objects. 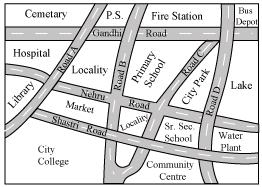 Answer the following.
(a) Colour the map as follows: Blue – water plant, red – fire station, orange – library, yellow – schools, green – park, pink – college, purple – hospital, brown – cemetery.
(b) Mark a green ‘X’ at the intersection of Road ‘C’ and Nehru Road, Green ‘Y’ at the intersection of Gandhi Road and Road A.
(c) In red, draw a short street route from library to the bus depot.
(d) Which is further east, the city park or the market?
(e) Which is further south, the Primary School or the Sr. Secondary School?
Answer :
(a) The given map coloured in the required way is as follows. 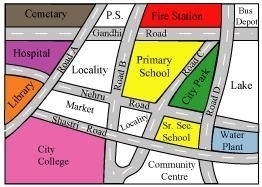 (b)The marks can be put at the given points as follows. 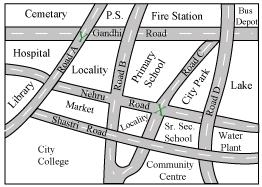 (c) The shortest route from the library to bus depot is represented by red colour. 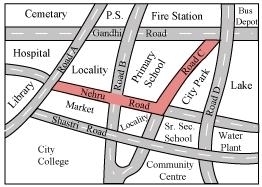 (iii) Yes, a square pyramid has a square face and 4 triangular faces.

Q2 : Is it possible to have a polyhedron with any given number of faces? (Hint: Think of a pyramid).
Answer :
A polyhedron has a minimum of 4 faces.

Q3 : Which are prisms among the following?
(i)