Q3 : Write T against true and F against false in the following statements.
(a) Like charges attract each other. (T / F)
(b) A charged glass rod attracts a charged plastic straw. (T / F)
(c) Lightning conductor cannot protect a building from lightning. (T/F)
(d) Earthquakes can be predicted in advance. (T / F)
Answer :
(a) False
Like charges repel each other. It is the unlike charges that attract each other.
(b) True
A charged glass rod has positive charges on its surface while a charged plastic straw has negative charges on its surface. Since unlike charges attract each other, a charged glass rod attracts a charged plastic straw.
(c) False
During a lightning, the lightning conductor conducts all the atmospheric charges to the Earth directly, leaving the building safe. Hence, lightning conductors protect a building from lightning.
(d) False
Although the causes of earthquakes is known, but no instrument could be invented to detect it till now. Hence, earthquakes cannot be predicted in advance.

Q4 : Sometimes, a crackling sound is heard while taking off a sweater during winters. Explain.
Answer :
Whena sweater is taken off, the woollen sweater gets charged because of the friction between the sweater and the body. Hence, one can hear a crackling sound during the given process.

Q7 : Suggest three measures to protect ourselves from lightning.
Answer :
Protective measures against lightning are as follows:
(i) Stay in a completely closed place. If you are moving in a car, then remain there until the lightning is over. Close the windows of the car immediately.
(ii) Do not touch any electrical wires, telephone cables, metal pipes, etc.
(iii) Do not bath in running water. This may cause an electric shock. 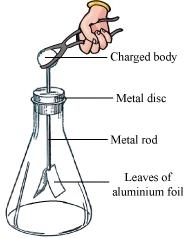 It consists of a metal rod. At one end of the rod, two leaves of aluminium foil are fixed and at the other end, there is a metal disc. The leaves of aluminium foil are placed inside a conical flask and the flask is corked to isolate the leaves from air.
When the metal disc is touched with a charged body, the aluminium strips move away from each other. This happens because some of the charges of the body are transferred to the strips through the metal rod. This method of charging a body is called charging by conduction. The nature of charges on both the leaves and the charged body are the similar. Hence, both the leaves of the aluminium foil will move away from each other. If the body was not charged, then the leaves of the foil would remain as they were before. They would not repel each other.

Q11 : Suppose you are outside your home and an earthquake strikes. What precaution would you take to protect yourself?
Answer :
Some of the precautions are as follows:
(i) Try to find an open field away from tall buildings, installations, tall trees, and electric wires and poles.
(ii) If travelling in a bus or a car, then do not come out when an earthquake strikes. Ask the driver to drive in an open field.

Q12 : The weather department has predicted that a thunderstorm is likely to occur on a certain day. Suppose you have to go out on that day. Would you carry an umbrella? Explain.
Answer :
No. We should not carry an umbrella in a thunderstorm. During thunderstorms, which are accompanied with lightning, electric discharge from the clouds can travel through the metallic rod of the umbrella. This may give an electric shock to the person who is carrying it. Hence, it is not safe to carry an umbrella during lightning.