No. Due to the revolution of the Earth around the Sun, the gravitational force of the Sun on the Earth system is almost zero. Hence, the body will not experience any force due to the Sun. Therefore, weight of the object will remain the same.

The mutual gravitational force between the apple and the Earth is responsible for the acceleration produced in the apple falling from the tree. Although the Earth will experience the same force, it does not get attracted towards the apple because of its large mass. The insect feels that the Earth is falling towards the apple with an acceleration g because of the the relative motion.
let
vae=velocity of apple w.r.t earth
Vea=velocity of earth w.r.t apple
vae=va-ve=-(ve-va)=-vea
As the insect is in the frame of apple so he sees the earth moving with a relative velocity vea.
Any other observer on earth will see the apple moving towards earth with velocity vae.Both are opposite in direction.

If there were negative masses, then this type of system is possible.

This system is a dipole of two masses, i.e., two masses, one positive and the other negative, separated by a small distance.

In this case, the gradational field due to the dipole is proportional to 1r3.

No, if we suppose that the potential energy for r=∞ is 20 J, then we need to modify the formula.

Now, potential energy of the two-particle system separated by a distance r is given by

This formula should be used to calculate the gravitational potential energy at separation r.

The weight of an object is more at the poles than that at the equator. In purchasing or selling goods, we measure the mass of the goods. The balance used to measure the mass is calibrated according to the place to give its correct reading. So, it is not beneficial to purchase goods at the equator and sell them at the poles. A beam balance measures the mass of an object, so it can be used here. For using a spring balance, we need to calibrate it according to the place to give the correct readings.

If we consider the Earth to be a perfect sphere, then the acceleration due to gravity at its surface is given by g=GMR2.
Here, M is the mass of Earth; R is the radius of the Earth and G is universal gravitational constant.

If the radius of the earth is decreased by 1%, then the new radius becomes

According to Kepler first law of planetary motion all planets move in elliptical orbits with sun at one of its foci. It applies to any planet and its satellite as well.This implies that plane of the satellite has to pass through the centre of planet (earth).

No. All geostationary orbits are concentric with the equator of the Earth.

A person living in a house at the equator will not feel weightlessness because he is not in a free fall motion. Satellites are in free fall motion under the gravitational pull of the earth, but, due to the curved surface of the Earth, they move in a circular path. The gravitational force on the satellite due to the Sun provides the centripetal force for its revolution. Therefore, net force on the satellite is zero and, thus, a person feels weightless in a satellite orbiting the earth.

No, both satellites will have different time periods as seen from the Earth. The satellite moving opposite (east to west) to the rotational direction of the Earth will have less time period, because its relative speed with respect to the Earth is more.

We know that the distance of the Moon from the Earth is about 60 times the radius of the earth. So, acceleration due to gravity at that distance is 0.0027 m/s2. When the Moon is stopped for an instant and then released, it will fall towards the Earth with an initial acceleration of 0.0027 m/s2.

The work done by the person is equal to the kinetic energy and the potential energy of the mass of 1 kg at point A.

Let VA be the potential at point A. 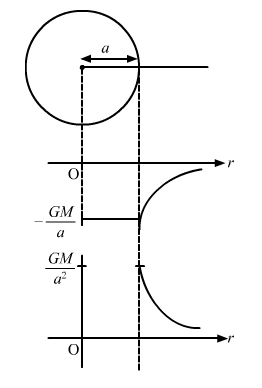 Both the plots (i.e., V against r and E against r) are continuous curves for a uniform solid sphere.

So, there are points above both the poles where the value of g is equal to its value at the equator. 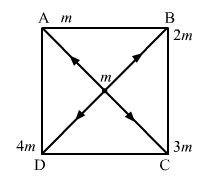 (a) the mass of the satellite

The time period of an earth-satellite in circular orbit is independent of the mass of the satellite, but depends on the radius of the orbit. 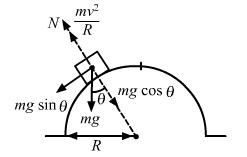 For a system to be bound , total energy of the system should be negative.As we know that kinetic energy can never be negative.
E<0 & K>0 & E=K+U
it gives that U>K.

Kepler’s second law states that the line joining a planet to the Sun sweeps out equal areas in equal intervals of time, i.e., areal velocity of a planet about the Sun is constant.

The given areas swept by the planet are equal, so t1 = t2

(c) the normal force is zero

The gravitational pull on the satellite is used up in providing the necessary centripetal force required for its revolution around the earth. This means that there is no net force on the person sitting in a chair in the satellite. So, the normal reaction of the chair on the person is zero and he will feel weightless.

Question : Solution of Questions on page Number : 225
The gravitational pull on the satellite in both cases is used up in providing the necessary centripetal force required for its revolution around the earth. This means that there is no net force acting on the body which has been suspended from a spring balance in the satellite. So, the readings of the spring balan2ce in both the cases are the same and is equal to zero.

The kinetic energy needed to project a body of mass m from the Earth’s surface to infinity is equal to the negative of the change in potential energy of the body.

(b) decreases
AS it is maintaining its shape so its mass will remain constant which implies that if it shrinks then its volume decreases and to keep the mass constant ,its density increases.Also the gravitational potential at the centre of a uniform spherical shell is inversely proportional to the radius of the shell with a negative sign. When a uniform spherical shell gradually shrinks, the gravitational potential at the centre decreases (because of the negative sign in the formula of potential).

When a planet is moving in an elliptical orbit, at some point, the line joining the centre of the Sun and the planet is perpendicular to the velocity of the planet. For that instant, work done by the gravitational force on the planet becomes zero. As there is no net increase in the speed of the planet after one complete revolution about the Sun, the work done by the gravitational force on the planet in one complete revolution is zero.
Note:For elliptical orbits angle between force ans velocity is always 90 so there the work done is zero in any small part of the orbit.

In planetary motion, the net external torque on the planet is zero. Therefore, angular momentum will remain constant.

(a)
Consider that mass ‘m’ is placed at the midpoint O of side AB of equilateral triangle ABC. 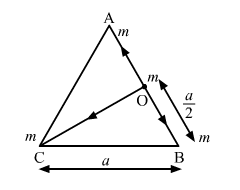 (b) If the particle placed at O (centroid) 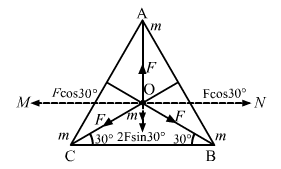 All the forces are equal in magnitude but their directions are different as shown in the figure.

Equal and opposite forces along OM and ON cancel each other.

Three spheres are placed with their centres at A, B and C as shown in the figure. 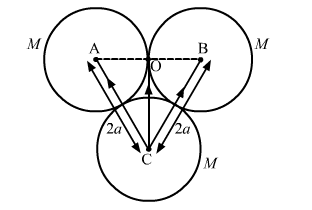 Assume that three particles are at points A, B and C on the circumference of a circle.
BC = CD = 2a 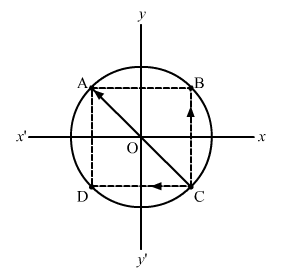 So, the resultant gravitational force on C is FC=Gm24R222+1.

The acceleration due to gravity at a point at height h from the surface of the moon is given by
g=GMr2,
where M is the mass of the moon; r is the distance of point from the centre of the moon and G is universal gravitational constant.

In the semicircle, we can consider a small element dθ.

Consider a small mass element of length dx at a distance x from the centre of the rod.
Mass of the mass element, dm = (M/L) × dx 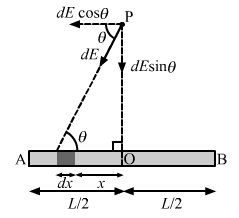 The components of the gravitational field due to the symmetrical mass element along the length of the rod cancel each other.

Consider that mass m is at a distance R1+R22 as shown in the figure. 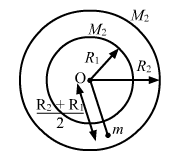 The gravitational force of m due to the shell of M2 is zero, because the mass is inside the shell.

Mass of the Earth, M=43πR3ρ …(i)
Consider an imaginary sphere of radius x with centre O as shown in the figure below: 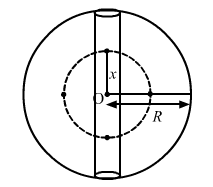 ∴ Gravitational force on the particle of mass m is given by

Let d be distance of the particle from the centre of the Earth. 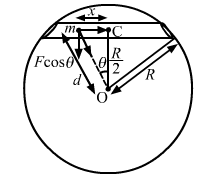 Gravitational force on the particle of mass m is given by
F=GM1md2⇒F=Gd3MmR3d2⇒F=GMmR3d
∴ Normal force exerted by the wall, FN = F cos θ=GMmdR3×R2d=GMmd2R2

(a) Consider that the particle is placed at a distance x from O. 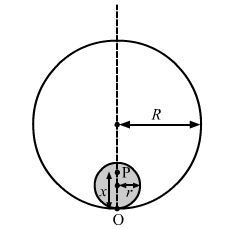 (b) If 2r < x < 2R,
Force on the body due to the shell will again be zero as particle is still inside the shell.
then F is only due to the solid sphere.
∴F=Gmm’x-r2

At point P1, the gravitational field due to the sphere and the shell is given by
F=GM3a+a2+0=GM16a2 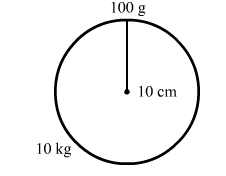 Since the directions of the field and the displacement are perpendicular to earth other, no work is done by the gravitational field when a particle is moved on the given line.

∴ The acceleration due to gravity on the top of Mount Everest is 9.77 m/s2.

At the equator, g’ = g − ω2R …(i)
Let h be the height above the South Pole where the body stretch the spring by the same length.
The acceleration due to gravity at this point is g’=g1-2hR.

(a) Speed of the ship due to rotation of the Earth is v = ωR, where R is the radius of the Earth and ω is its angular speed.

(c) Let the ship move with a speed v.
Then the tension in the string is given by

According to Kepler’s laws of planetary motion, the time period of revolution of a planet about the Sun is directly proportional to the cube of the distance between their centres.
i.e., T2 ∝ R3
⇒Tm2Te2=Rm3Re3⇒RmRe3=1.8812∴RmRe=1.882/3=1.52

Time period of rotation of the Moon around the Earth is given by
T=2πr3GM,
where r is the distance between the centres of the Earth and Moon and m is the mass of the Earth.

(a) The angular speed of the Earth and the satellite will be the same.

Consider that B is the position of the geostationary satellite. 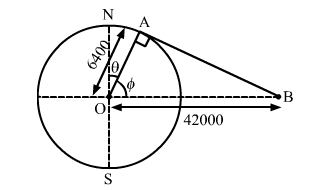 In the given figure, ϕ is the latitude and θ is the colatitude of a place which can directly receive a signal from a geostationary satellite.

The particle attained a maximum height 6400 km, which is equal to the radius of the Earth.

Total energy of the particle on the Earth’s surface is given by
Ee=12 MV2+-gmMr ….1

Initial velocity of the particle, v = 15 km/s
Let its speed be v’ in interstellar space.