Question 1: Crystals of Bt toxin produced by some bacteria do not kill the bacteria themselves because −
(a) bacteria are resistant to the toxin
(b) toxin is immature:
(c) toxin is inactive:
(d) bacteria encloses toxin in a special sac.
Answer:
toxin is inactive:
In bacteria, the toxin is present in an inactive form, called prototoxin, which gets converted into active form when it enters the body of an insect.

Question 2: What are transgenic bacteria? Illustrate using any one example.
Answer:
Transgenic bacteria contain foreign gene that is intentionally introduced into its genome. They are manipulated to express the desirable gene for the production of various commercially important products.

An example of transgenic bacteria is E.coli. In the plasmid of E.coli, the two DNA sequences corresponding to A and B chain of human insulin are inserted, so as to produce the respective human insulin chains. Hence, after the insertion of insulin gene into the bacterium, it becomes transgenic and starts producing chains of human insulin. Later on, these chains are extracted from E.coli and combined to form human insulin.

Question 3: Compare and contrast the advantages and disadvantages of production of genetically modified crops.
Answer:
The production of genetically modified (GM) or transgenic plants has several advantages.
(i) Most of the GM crops have been developed for pest resistance, which increases the crop productivity and therefore, reduces the reliance on chemical pesticides.
(ii) Many varieties of GM food crops have been developed, which have enhanced nutritional quality. For example, golden rice is a transgenic variety in rice, which is rich in vitamin A.
(iii) These plants prevent the loss of fertility of soil by increasing the efficiency of mineral usage.
(iv) They are highly tolerant to unfavourable abiotic conditions.
(v) The use of GM crops decreases the post harvesting loss of crops.

However, there are certain controversies regarding the use of genetically modified crops around the world. The use of these crops can affect the native biodiversity in an area. For example, the use of Bt toxin to decrease the amount of pesticide is posing a threat for beneficial insect pollinators such as honey bee. If the gene expressed for Bt toxin gets expressed in the pollen, then the honey bee might be affected. As a result, the process of pollination by honey bees would be affected. Also, genetically modified crops are affecting human health. They supply allergens and certain antibiotic resistance markers in the body. Also, they can cause genetic pollution in the wild relatives of the crop plants. Hence, it is affecting our natural environment.

Question 4: What are Cry proteins? Name an organism that produces it. How has man exploited this protein to his benefit?
Answer:
Cry proteins are encoded by cry genes. These proteins are toxins, which are produced by Bacillus thuringiensis bacteria. This bacterium contains these proteins in their inactive from. When the inactive toxin protein is ingested by the insect, it gets activated by the alkaline pH of the gut. This results in the lysis of epithelial cell and eventually the death of the insect. Therefore, man has exploited this protein to develop certain transgenic crops with insect resistance such as Bt cotton, Bt corn, etc.

Question 5: What is gene therapy? Illustrate using the example of adenosine deaminase (ADA) deficiency.
Answer:
Gene therapy is a technique for correcting a defective gene through gene manipulation. It involves the delivery of a normal gene into the individual to replace the defective gene, for example, the introduction of gene for adenosine deaminase (ADA) in ADA deficient individual. The adenosine deaminase enzyme is important for the normal functioning of the immune system. The individual suffering from this disorder can be cured by transplantation of bone marrow cells. The first step involves the extraction of lymphocyte from the patient’s bone marrow. Then, a functional gene for ADA is introduced into lymphocytes with the help of retrovirus. These treated lymphocytes containing ADA gene are then introduced into the patient’s bone marrow. Thus, the gene gets activated producing functional T- lymphocytes and activating the patient’s immune system.

Question 6: Diagrammatically represent the experimental steps in cloning and expressing an human gene (say the gene for growth hormone) into a bacterium like E. coli ?
Answer:
DNA cloning is a method of producing multiple identical copies of specific template DNA. It involves the use of a vector to carry the specific foreign DNA fragment into the host cell. The mechanism of cloning and transfer of gene for growth hormone into E.coli is represented below. 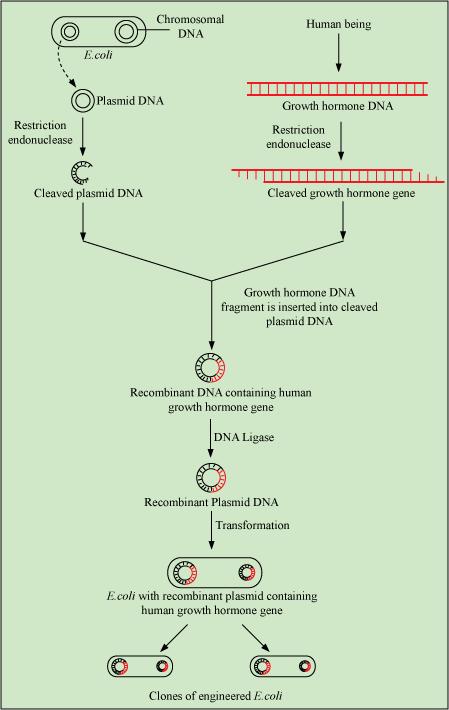 Question 7: Can you suggest a method to remove oil (hydrocarbon) from seeds based on your understanding of rDNA technology and chemistry of oil?
Answer:
Recombinant DNA technology (rDNA) is a technique used for manipulating the genetic material of an organism to obtain the desired result. For example, this technology is used for removing oil from seeds. The constituents of oil are glycerol and fatty acids. Using rDNA, one can obtain oilless seeds by preventing the synthesis of either glycerol or fatty acids. This is done by removing the specific gene responsible for the synthesis.

Question 8: Find out from internet what is golden rice.
Answer:
Golden rice is a genetically modified variety of rice, Oryza sativa,which has been developedas a fortified food for areas where there is a shortage of dietary vitamin A. It contains a precursor of pro-vitamin A, called beta-carotene, which has been introduced into the rice through genetic engineering. The rice plant naturally produces beta- carotene pigment in its leaves. However, it is absent in the endosperm of the seed. This is because beta-carotene pigment helps in the process of photosynthesis while photosynthesis does not occur in endosperm. Since beta-carotene is a precursor of pro- vitamin A, it is introduced into the rice variety to fulfill the shortage of dietary vitamin A. It is simple and a less expensive alternative to vitamin supplements. However, this variety of rice has faced a significant opposition from environment activists. Therefore, they are still not available in market for human consumption.

Question 9: Does our blood have proteases and nucleases?
Answer:
No, human blood does not include the enzymes, nucleases and proteases. In human beings, blood serum contains different types of protease inhibitors, which protect the blood proteins from being broken down by the action of proteases. The enzyme, nucleases, catalyses the hydrolysis of nucleic acids that is absent in blood.

Question 10: Consult internet and find out how to make orally active protein pharmaceutical. What is the major problem to be encountered?
Answer:
Orally active protein pharmaceuticals contain biologically active materials such as peptides or proteins, antibodies, and polymeric beads. It is administrated orally into the body through various formulations. It involves the encapsulation of protein or peptide in liposomes or formulations using penetration enhancers. These proteins or peptides are used for treatment of various diseases and are also used as vaccines. However, the oral administration of these peptides or proteins has some problems related to it. Once these proteins are ingested, the proteases present in the stomach juices denature the protein. As a result, their effect will be nullified. Hence, it is necessary to protect the therapeutic protein from digestive enzymes, if taken orally. This is the reason for the proteins to be injected directly into the target site.