Working With the Text (Page21)
Discuss these questions in pairs before you write the answers.

Q1.Why did the dog feel the need for a master? (1,2)
Ans: The dog was sick and tired of going about alone in search of food. And he did not feel safe. So he decided to have a master.

Q2. Who did he first choose as his master? Why did he leave that master? (3)
Ans: The dog first chose a wolf as his master. But he found the wolf afraid of the bear. So he left the company of the wolf.

Q3.Who did he choose next? (3)
Ans: Next, the dog chose a bear as his master, because he was stronger than the Wolf.

Q5.Who did he finally choose as his master and why? (9, 10)
Ans: The dog finally chose man as his master. Even the lion was afraid of man. So the dog was convinced that man was the strongest creature on earth.

Q6 .A summary of the story is given below. Fill in the blanks to complete it taking appropriate phrases from the box. ,

Q1.Each word in the box given below indicates a large number of… For example, ‘a herd of cows’ refers to many cows.

Complete each of the following phrases with a suitable word from

Q2.Make nouns from the words given below by adding – ness or – ity (For some words we need to add just – ty or – y)

Q3.Word Search
These are tweleve words hidden in tha table.
Six can be found horizontally and the remaining six vertically.
All of them are describing words like ‘good’, ‘happy’, etc.
The first letters of the words are given below:
Horizontal: H R F FS G
Vertical: A W S F L Q

Read the following passage and do the exercises that follow. Then complete the family tree of dogs given on the facing page.

The dog family is one of the 11 families that make up the Carnivores, a large group of intelligent, flesh-eating, backboned animals. In this group are such varied ani­mals as bears, pandas, raccoons, cats, hyenas, and even seal. The dog or canine family has many wild species like wolves, foxes, coyotes, jackals, and wild dogs.
The dog is the only domesticated member of the canine family though now and then someone tames a wolf, fox or coyote as a pet. All members of the dog family are descendants of a wolf-like animal which lived about 15 million years ago. From this distant ancestor, the true dogs gradually developed. But nobody knows the exact ancestor of the modem domestic dog.
Several wild dogs look and behave like domestic dogs. The dingo or wild dog of Australia is one of these. It is possible that the dingo was a tamed dog brought to Australia long ago which then ran wild.
Dogs were the first animals tamed by humans—perhaps 20,000 years ago. Tamed dogs were brought from Asia to the New world 5,000 or more years ago. Dogs were first used for hunting. 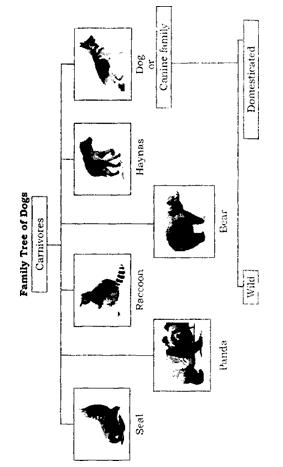 Q1.Here are some points from a similar story that you might have heard in another language. Dividing the class into two groups try and tell the story in English. One person from each group can speak alternately. Your teacher will help you. As you tell it, one of you may write it down on the board.

mouse changed into a girl by a magician …
wants to marry the strongest person …
asks whether sun or cloud stronger (why?) …
but mountain stronger than clouds (how?)… ,
but mouse stronger than mountain (how?)…
girl asks to many mouse, becomes a mouse again.

Ql. What sort of life did Dogs live a long time ago?
Ans: Dogs were once their own masters. They moved out freely like wolves.

Q2.Why did the Dog decide to lose his freedom?
Ans: The dog found his life boring and unsafe. He had to look for his food alone. He felt tired. He was also afraid of stronger animals.

Q4.What major decision did that Dog take?
Ans: That dog decided to become the servant of one who was stronger than anyone on earth. He set out to find such a master.

Q5.Why did the Dog say goodbye to the Wolf?
Ans: The Dog noticed that the Wolf was afraid of the Bear. So he left the weak master and joined the Bear.

Q6.Who was the Bear afraid of?
Ans: The Bear too was frightened when he got the smell of a Lion. He fled swiftly into the deep forest.

Q7. What was the Dog’s experience with the Lion?
Ans: The Lion was definitely stronger than any other beast in the forest. The Dog felt happy and secure with his new master. But the Lion also showed signs of fear on seeing man. So he decided to take up service with man.

Q8. What does the writer say about the friendship between man and dog?
Ans: Dog is man’s most dependable servant. He has been serving his master most faithfully for ages. He never felt the need to change his master again.

Q1. Why did the dog prefer a strong master to life in the jungle?
Ans: Centuries ago, the wild dog roamed as freely in the forest as wolves. He enjoyed absolute freedom. But he was not quite happy with his way of life. He was sick of his loneliness. He was also afraid of animals stronger than him. He had to look for food himself. So to save himself from hunger and danger of other animals, he decided to have a master stronger than anyone else on earth.

Q2. Give the list of the animals the Dog agreed to accompany and serve. Why did it reject them all?
Ans: The Dog set out in search of his protector or master. He first met a Wolf but it was afraid of the Bear. The Dog then asked the Bear to be his master. But the Bear fled on seeing a Lion. The Dog agreed to serve the king of the forest, the Lion. But one day the Lion also showed his fear of man. So the’ Dog said good­bye to Lion and accepted man as his master. He is man’s loyal servant till this day.