Working With the Text (Page 34) Answer the following questions.

Q3. Why did the waterfall give Taro sakeand others water? (12)
Ans: The waterfall obliged Taro and changed water into sake. The reason was that he was a thoughtful son. He served his old parents sincerely. Sake was the reward for his goodness. Other people were just greedy. So they got only plain water.

Q4. Why did the villagers want to drown Taro? (10, 11)
Ans: The villagers went to the waterfall to collect sake. But they got only plain cold water. They thought that Taro had tricked them. So they looked for Taro to punish him.

Q5. Why did the Emperor reward Taro? (13)
Ans: The Emperor of Japan rewarded Taro for being good and kind towards his parents. This was Emperor’s way to encourage all children to respect, obey and serve their parents.

3. The neighbour left Taro’s hut in a hurry because
(i)she was delighted with the drink.
(ii)she was astonished to hear Taro’s story.
(iii)she wanted to tell the whole village about the waterfall.
Ans. 1. (iii), 2. (ii), 3. (iii)

Q1. Strike off the words in the box below that are not suitable.
Taro wanted to give his old parents everything they needed. This shows that he was ….
thoughtful hardworking loving honest
considerate trustworthy efficient kind
Ans. honest, trustworthy, efficient
This made Taro sadder than ever.”
This’ refers to
(i)a strong wind that began to blow.
(ii)Taro’s father’s old age.
(iii)Taro’s inability to buy expensive sake for his father.
(Mark the right item.)

Q2. ‘This, said the emperor was to encourage all children to honour and obey their parents.”
This’ refers to
(i) the most beautiful fountain in the city.
(ii)rewarding Taro with gold and giving the fountain his name.
(iii)sending for Taro to hear his story. .
(Mark the right item.)
Ans: 1.(iii) 2. (ii)

Q3. Arrange the words below in pairs that rhyme.

Q4. Fll in the blanks with words from the box.

Q1. Speak the following sentences clearly but as quickly as you can learn them by heart.
(i)How much wood would a woodchuck chuck if a woodchuck would chuck wood.
(ii)Betty bought a bit of butter, but the bit of butter was a little bitter so she bought some better butter to make the bitter butter better.
Ans: Do it yourself in the classroom.

Q2. The story ‘Taro’s Reward’ shows that Taro is thoughtful, hardworking and
also wise. Read aloud the parts of story that show these qualities in Taro.
Ans: (i )…. for he was a thoughtful son and wanted to give his old parents everything they needed. (Para 1)
(ii)Though he worked very hard, he earned very little money. (Para 1)
(iii)But Taro had been wise enough to slip behind a rock…………….. (Para 11)

Q3. (i) Like Patrick in the story ‘Who did Patrick’s Homework’, Taro is helped bymagic. Do you believe in magic? What are the magical things that happen in these stories?
Ans. My parents say there is no such thing as magic. It is all a matter of playing tricks. But I agree with the elders only partly. Magic is not all sleight of hand or mesmerism. There is some supernatural agency that carries out the tricks.

In the case of Patrick, there was an elf or small man. He was not one like us. In the case of Taro, there appears a waterfall behind the rocks. Secondly, its water tasted like sake. These were magical things.

(ii) Which story do you like better, and why? Do you know such stories in other languages? Discuss these questions in class.
Ans: Truly speaking, I like both the stories because both are interesting and educative. Secondly, both have a touch of magic. Still, Patrick’s story is better than Taro’s. Patrick learns to do homework unknowingly.

Q4. Now write a paragraph or two about these two stories, comparing them.
Ans: Who did Patrick’s Homework is, in my opinion, better than ‘Taro’s Reward.’. Patrick hated homework. He played hockey and basketball instead. This was something quite natural. All children find doing homework boring and dull. Taro, on the other hand, was a thoughtful, wise and hardworking boy. He was just the opposite of Patrick. Even God favours and rewards such a boy. A magical waterfall gave him an intoxicating drink for his old father. Both the stories teach us lessons.

Q5. 1.Listen to these children. What are they talking about? 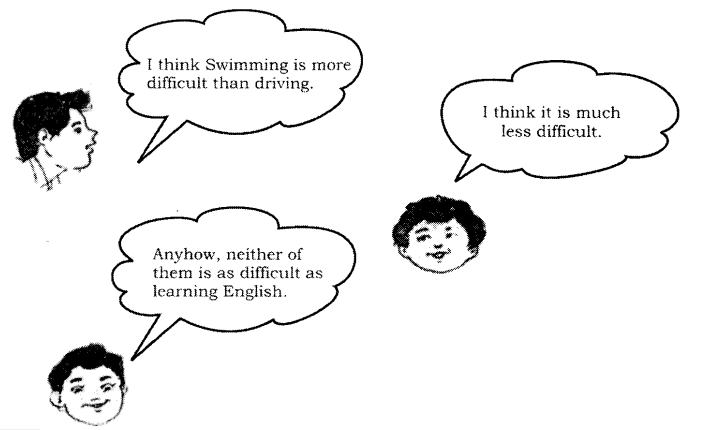 2. Work in groups. Come to some agreement on each of the activities given below. Decide which is the most interesting, dullest, most dangerous, safest, most rewarding, most exciting.

Q1. Who was Taro? What was his most endearing quality?
Ans. Taro was a young woodcutter. He was poor but hardworking. He honestly wanted to serve his old parents, and keep them happy. That was his greatest virtue.

Q2. What did Taro’s father wish for one cold day?
Ans: Taro’s old father shivered with cold. He wished he had a cup of sake which would warm his body and do good to his heart.

Q3. How did Taro manage to meet the demand of his father?
Ans.: Taro had no money to buy expensive sake. So he began to work harder at chopping wood. God helped him in getting sake free from a waterfall. The father drank it, felt warm and started dancing.

Q5. How did the villagers react after tasting the water of the magic waterfall?
Ans: They tasted the water and found it plain cold water. They were angry and disappointed. They decided to drown Taro into the stream for befooling them.

Q6. How did the Emperor of Japan reward Taro?
Ans: The Emperor rewarded Taro with 20 pieces of gold for his goodness. He also named the most beautiful fountain of the city after Taro.

Q1. Bring out some of the sterling qualities of the character of Taro.
Or
Give a character sketch of Taro.
Ans: Taro was a poor young woodcutter. He lived with his parents on a hill-side. He worked very hard but earned very little money. He was deeply devoted to his old parents. One evening his shivering father wished to have a cup of sake. Taro began to work harder to earn money to buy the expensive drink. God came to help. One day he found a waterfall. The water tasted like magic sake. Taro gave the sake to his shivering father and became happy to think that he satisfied his father. When the greedy villagers went to the waterfall they found normal water. The angry villagers wanted to kill Taro for befooling them. But wise Taro slipped behind a rock. He was duly rewarded by the Emperor of Japan.

Q2.How did Taro meet the demand of his father?
Ans: Taro was a young woodcutter. He honoured, loved and obeyed his parents. But he earned very little money. One cold evening his father wished he had a cup of sake. Taro began to work harder to earn more money and buy sake. He was favoured by fate. He discovered a waterfall, the water of which tasted like sake. He brought a pitcher full of that drink to meet the demand of his father.

Q3 .Why- did the magic waterfall disappoint other villagers? What reward did Taro get and from whom?
Ans: The waterfall was a magic creation by God. It was to reward Taro’s honest labour, and devotion to his parents. The cold water tasted like sake for the old man. But it disappointed the greedy villagers. They found it like plain cold water. The story of Taro’s great discovery of magic waterfall reached the Emperor of Japan. He rewarded Taro with gold coins for serving his parents so sincerely.