Working With the Text (Page 62)

A. Put these sentences from the story in the right order and write them out in a paragraph. Don’t refer to the text.

B. Answer the following questions:

Q1. Why do you think the writer visited Miss Beam’s school? (1)
Ans: The writer had heard much about Miss Beam’s new teaching method. So he visited her school to see the new play-way method personally.

Q3. “Each term every child has one blind day, one lame day …”. Complete the line. Which day was the hardest? Why was it the hardest? (9, 11, 15)
Ans: “… one injured day and one dumb day.” Being blind was the hardest day. The student felt that he/she was going to be hit by something every moment.

Q5. Match the words and phrases with their meanings in the box below.
paragraph numbers

Q2.Re-word these lines from the story:

1.I had heard a great deal about Miss Beam’s school.
2.Miss Beam was all that I had expected – middle-aged, full of authority.
3.I went to the window which overlooked a large garden.
4.“We cannot bandage the children’s mouths, so they really have to exercise their will-power”.

Ans:
1. The writer had heard people praising the teaching methods at Miss Beam’s school.
2.The writer found Miss Beam a middle aged and dominating woman.
3.The author looked out of the window and saw a large garden.
4.The children had to use their will power to keep quiet.

Q4. Now make lists of
(i) all the words on the page (plus any more that you can think of) that begins with terr.
Ans: terrace, terrible, terrify, territory, terrain
(ii)five words that may follow the last word on the page, that
Ans: Those, this, theatre
(iii)write down your own meaning of the word Then write down the meaning given in the dictionary.
Ans:The word ‘thank’ means to express gratitude for kindness, gift or service.
Example: There is no need to thank me.
We thanked them for all their help.
She has only herself to thank for what happened.
A poem for you to read 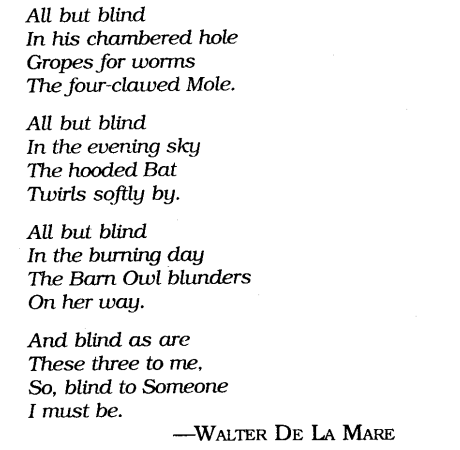 Q1. Make a short list of things you find difficult to do.
For example:

B.Look at your hands carefully. Now, write down for each finger one action for which that finger is particularly important. For example, the second (or index) finger helps to hold the knife down firmly when cutting.

Q1. Describe the appearance of Miss Beam.
Ans: Miss Beam was middle-aged, dominating, yet kindly. Her hair was turning grey and she was a little fat.

Q2. What did Miss Beam teach the children at her school?
Ans: The children were taught simple spelling, adding, subtracting, multiplying and writing.

Q4. What did the author point out about the children in the playground?
Ans: The .author complained that not all children were healthy and active-looking. Some were blind or lame and crippled.

Q5. What did Miss Beam tell the author about the game being played among the friends?
Ans: Miss Beam explained to the author that no child was lame, blind or crippled. They were, in fact, being made to understand misfortune. Every child had one blind day. one lame day and one dumb day. They were helped by other children.

Q6. How did the little bandaged girl make the author much more thoughtful than he ever thought?
Ans: The bandaged girl asked the author to describe things to her. The author had to observe places and persons very carefully. He noticed the colour of the hair or skirt. He discovered after a while that he had become thoughtful.

Q1. In what respect was Miss Beam’s school different from others?
Ans: Miss Beam ran a school. But it was very different from others. The children were taught how to spell words, do sums and write. The teacher taught to them interesting lessons. But the real aim of the school was to make children sensitive and good citizens, kind and responsible. They were given practical training to develop such a character.

Q3. Which incident made the visitor to the school ten times more thoughtful than ever?
Ans: The narrator had heard a lot about the unique method of teaching in Beam’s school. At first he saw a blind girl being led out. Then he saw a lame boy. He thought that the students were not at all healthy and active. But soon he came to know that that they were just acting to be blind, lame, crippled etc. Meanwhile, he was asked to lead a blind girl around. The blind girl asked him many questions. And he had to apply his brain to describe people and things. He realised that he had become ten times more thoughful than ever.