Class 11th Biology Chapter 4 Animal Kingdom NCERT Solution is given below.
Question 1: What are the difficulties that you would face in classification of animals, if common fundamental features are not taken into account?
Answer:
For the classification of living organisms, common fundamental characteristics are considered.
If we consider specific characteristics, then each organism will be placed in a separate group and the entire objective of classification would not be achieved. Classification of animals is also important in comparing different organisms and judging their individual evolutionary significance. If only a single characteristic is considered, then this objective would not be achieved.

Question 2: If you are given a specimen, what are the steps that you would follow to classify it?
Answer:
There is a certain common fundamental feature that helps in classification of living organisms. The features that can be used in classification are as follows. 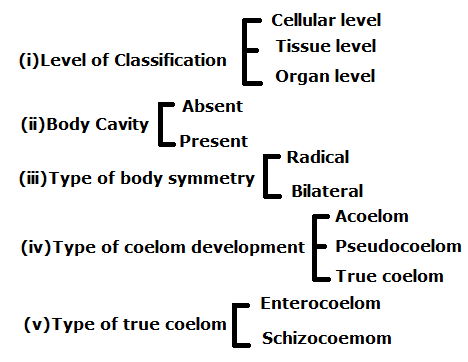 On the basis of above features, we can easily classify a specimen into its respective category.

Question 3: How useful is the study of the nature of body cavity and coelom in the classification of animals?
Answer:
Coelom is a fluid filled space between the body wall and digestive tract. The presence or absence of body cavity or coelom plays a very important role in the classification of animals. Animals that possess a fluid filled cavity between body wall and digestive tract are known as coelomates. Annelids, mollusks, arthropods, echinodermates, and chordates are examples of coelomates. On the other hand, the animals in which the body cavity is not lined by mesoderm are known as pseudocoelomates. In such animals, mesoderm is scattered in between ectoderm and endoderm. Aschelminthes is an example of pseudocoelomates. In certain animals, the body cavity is absent. They are known as acoelomates. An example of acoelomates is platyhelminthes.

Question 5: What is the difference between direct and indirect development?
Answer:

Question 7: What are the reasons that you can think of for the arthropods to constitute the largest group of the animal kingdom?
Answer:
The phylum, Arthropoda, consists of more than two-thirds of the animal species on earth. The reasons for the success of arthropods are as follows.
i. Jointed legs that allow more mobility on land
ii. Hard exoskeleton made of chitin that protects the body
iii. The hard exoskeleton also reduces water loss from the body of arthropods making them more adapted to terrestrial conditions.

Question 10: How important is the presence of air bladder in Pisces?
Answer:
Gas bladder or air bladder is a gas filled sac present in fishes. It helps in maintaining buoyancy. Thus, it helps fishes to ascend or descend and stay in the water current.

Question 11: What are the modifications that are observed in birds that help them fly?
Answer:
Birds have undergone many structural adaptations to suit their aerial life. Some of these adaptations are as follows.
(i) Streamlined body for rapid and smooth movement
(ii) Covering of feathers for insulation
(iii) Forelimbs modified into wings and hind limbs used for walking, perching, and swimming
(iv) Presence of pneumatic bones to reduce weight
(v) Presence of additional air sacs to supplement respiration

On the other hand, in viviparous organisms, the development of young ones takes place in safe conditions inside the body of the mother. They are less exposed to environmental conditions and predators. Therefore, there are more chances of their survival and hence, less number of young ones is produced compared to the number of eggs.

Question 13: Segmentation in the body is first observed in which of the following:
(a) Platyhelminthes (b) Aschelminthes (c) Annelida (d) Arthropoda
Answer:
The body segmentation first appeared in the phylum, Annelida (annulus meaning little ring).

Question 15: Prepare a list of some animals that are found parasitic on human beings.
Answer