In text : Solutions of Questions on Page Number : 244

Two optical isomers are possible for this structure.

(iii)
A pair of optical isomers:

It can also show linkage isomerism.

It can also show ionization isomerism.

Q5 :Explain on the basis of valence bond theory that [Ni(CN)4]2- ion with square
planar structure is diamagnetic and the [NiCl4]2- ion with tetrahedral geometry is paramagnetic.
Answer :
Ni is in the +2 oxidation state i.e., in d8 configuration.

There are 4 CN– ions. Thus, it can either have a tetrahedral geometry or square planar geometry. Since CN– ion is a strong field ligand, it causes the pairing of unpaired 3d electrons.

Since there are 2 unpaired electrons in this case, it is paramagnetic in nature.

But CO is a strong field ligand. Therefore, it causes the pairing of unpaired 3d electrons. Also, it causes the 4s electrons to shift to the 3d orbital, thereby giving rise to sp3 hybridization. Since no unpaired electrons are present in this case, [Ni(CO)4] is diamagnetic.

On the other hand, H2O is a weak field ligand. Therefore, it cannot cause the pairing of electrons. This means that the number of unpaired electrons is 5.
Therefore,

Q9:Predict the number of unpaired electrons in the square planar [Pt(CN)4]2- ion.
Answer :

In this complex, Pt is in the +2 state. It forms a square planar structure. This means that it undergoes dsp2 hybridization. Now, the electronic configuration of Pd(+2) is 5d8.

Both the compounds i.e.

fall under the category of addition compounds with only one major difference i.e., the former is an example of a double salt, while the latter is a coordination compound.
A double salt is an addition compound that is stable in the solid state but that which breaks up into its constituent ions in the dissolved state. These compounds exhibit individual properties of their constituents. For e.g

. breaks into Fe2+, NH4+, and SO42- ions. Hence, it gives a positive test for Fe2+ ions.
A coordination compound is an addition compound which retains its identity in the solid as well as in the dissolved state. However, the individual properties of the constituents are lost. This happens because

does not show the test for Cu2+. The ions present in the solution of

= neutral complex
(ii) Ligands
The neutral molecules or negatively charged ions that surround the metal atom in a coordination entity or a coordinal complex are known as ligands. For example,

(v) Homoleptic complexes:
These are those complexes in which the metal ion is bound to only one kind of a donor group. For eg:

(The donor atom is N)

(The donor atom is oxygen)
(b)

(The donor atom is S)

(The donor atom is N)

Q8 :List various types of isomerism possible for coordination compounds, giving an example of each.
Answer :

(a) Geometric isomerism:
This type of isomerism is common in heteroleptic complexes. It arises due to the different possible geometric arrangements of the ligands. For example:

(b) Optical isomerism:
This type of isomerism arises in chiral molecules. Isomers are mirror images of each other and are non-superimposable. 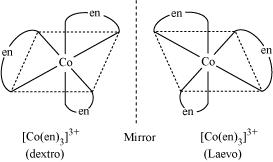 (c) Linkage isomerism: This type of isomerism is found in complexes that contain ambidentate ligands. For example:
[Co(NH3)5 (NO2)]Cl2 and [Co(NH3)5 (ONO)Cl2
Yellow form Red form
(d) Coordination isomerism:
This type of isomerism arises when the ligands are interchanged between cationic and anionic entities of differnet metal ions present in the complex.
[Co(NH3)6] [Cr(CN)6] and [Cr(NH3)6] [Co(CN)6]
(e) Ionization isomerism:
This type of isomerism arises when a counter ion replaces a ligand within the coordination sphere. Thus, complexes that have the same composition, but furnish different ions when dissolved in water are called ionization isomers. For e.g., Co(NH3)5SO4)Br and Co(NH3)5Br]SO4.
(f) Solvate isomerism:
Solvate isomers differ by whether or not the solvent molecule is directly bonded to the metal ion or merely present as a free solvent molecule in the crystal lattice.
[Cr[H2O)6]Cl3 [Cr(H2O)5Cl]Cl2⋅H2O [Cr(H2O)5Cl2]Cl.2H2O
Violet Blue-green Dark green 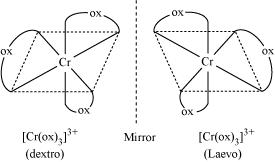 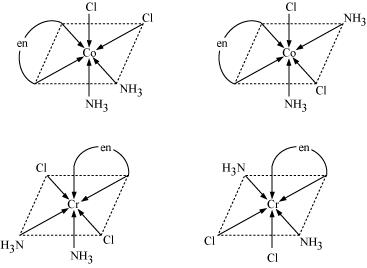 From the above isomers, none will exhibit optical isomers. Tetrahedral complexes rarely show optical isomerization. They do so only in the presence of unsymmetrical chelating agents.

Q13 :Aqueous copper sulphate solution (blue in colour) gives:
(i) a green precipitate with aqueous potassium fluoride, and
(ii) a bright green solution with aqueous potassium chloride
Explain these experimental results.
Answer :
Aqueous CuSO4 exists as [Cu(H2O)4]SO4. It is blue in colour due to the presence of
[Cu[H2O)4]2+ ions.
(i) When KF is added:

In both these cases, the weak field ligand water is replaced by the F – and Cl – ions.

Q14 :What is the coordination entity formed when excess of aqueous KCN is added to an aqueous solution of copper sulphate? Why is it that no precipitate of copper sulphide is obtained when H2S(g) is passed through this solution?
Answer :

Thus, the coordination entity formed in the process is K2[Cu(CN)4].

is a very stable complex, which does not ionize to give Cu2+ ions when added to water. Hence, Cu2+ ions are not precipitated when H2S(g)is passed through the solution.

As CN– is a strong field ligand, it causes the pairing of the unpaired 3d electrons.

Since there are six ligands around the central metal ion, the most feasible hybridization is d2sp3.
d2sp3 hybridized orbitals of Fe2+ are:

Hence, the geometry of the complex is octahedral and the complex is diamagnetic (as there are no unpaired electrons).
(ii) [FeF6]3-
In this complex, the oxidation state of Fe is +3.
Orbitals of Fe+3 ion:

There are 6 F– ions. Thus, it will undergo d2sp3 or sp3d2 hybridization. As F– is a weak field ligand, it does not cause the pairing of the electrons in the 3d orbital. Hence, the most feasible hybridization is sp3d2.
sp3d2 hybridized orbitals of Fe are:

Hence, the geometry of the complex is found to be octahedral.
(iii) [Co(C2O4)3]3-
Cobalt exists in the +3 oxidation state in the given complex.
Orbitals of Co3+ ion:

Oxalate is a weak field ligand. Therefore, it cannot cause the pairing of the 3d orbital electrons. As there are 6 ligands, hybridization has to be either sp3d2 or d2sp3 hybridization.
sp3d2 hybridization of Co3+:

The 6 electron pairs from the 3 oxalate ions (oxalate anion is a bidentate ligand) occupy these sp3d2 orbitals.

Hence, the geometry of the complex is found to be octahedral.
(iv) [CoF6]3-
Cobalt exists in the +3 oxidation state.
Orbitals of Co3+ ion:

Again, fluoride ion is a weak field ligand. It cannot cause the pairing of the 3d electrons. As a result, the Co3+ ion will undergo sp3d2 hybridization.
sp3d2 hybridized orbitals of Co3+ ion are:

Q16 :Draw figure to show the splitting of d orbitals in an octahedral crystal field.
Answer : 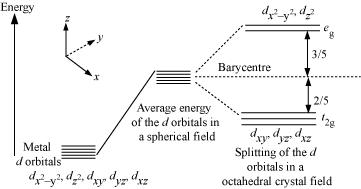 Therefore, it undergoes d2sp3 hybridization and the electrons in the 3d orbitals remain unpaired. Hence, it is paramagnetic in nature.
In [Ni(CN)4]2-, Ni exists in the +2 oxidation state i.e., d8 configuration.
Ni2+:

CN– is a strong field ligand. It causes the pairing of the 3d orbital electrons. Then, Ni2+ undergoes dsp2 hybridization.

As there are no unpaired electrons, it is diamagnetic.

Q20 :A solution of [Ni(H2O)6]2+ is green but a solution of [Ni(CN)4]2- is colourless. Explain.
Answer :
In [Ni(H2O)6]2+, is a weak field ligand. Therefore, there are unpaired electrons in Ni2+. In this complex, the d electrons from the lower energy level can be excited to the higher energy level i.e., the possibility of d – d transition is present. Hence, Ni(H2O)6]2+ is coloured.
In [Ni(CN)4]2- , the electrons are all paired as CN– is a strong field ligand. Therefore, d-d transition is not possible in [Ni(CN)4]2- . Hence, it is colourless.

Q21 : [Fe(CN)6]4- and [Fe(H2O)6]2+ are of different colours in dilute solutions. Why?
Answer :
The colour of a particular coordination compound depends on the magnitude of the crystal-field splitting energy, Δ. This CFSE in turn depends on the nature of the ligand. In case of [Fe(CN)6]4- and [Fe(H2O)6]2+, the colour differs because there is a difference in the CFSE.
Now, CN– is a strong field ligand having a higher CFSE value as compared to the CFSE value of water. This means that the absorption of energy for the intra d-d transition also differs. Hence, the transmitted colour also differs.

Q22 :Discuss the nature of bonding in metal carbonyls.
Answer :
The metal-carbon bonds in metal carbonyls have both σ and ∏ characters. A ∏ bond is formed when the carbonyl carbon donates a lone pair of electrons to the vacant orbital of the metal. A ∏ bond is formed by the donation of a pair of electrons from the filled metal d orbital into the vacant anti-bonding σ*  orbital (also known as back bonding of the carbonyl group). The σ bond strengthens the ∏ bond and vice-versa. Thus, a synergic effect is created due to this metal-ligand bonding. This synergic effect strengthens the bond between CO and the metal. 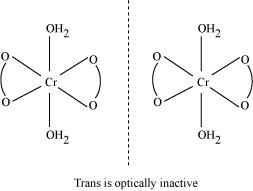 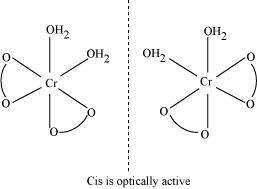 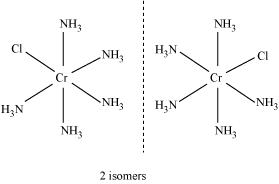 Both isomers are optically active. Therefore, a total of 4 isomers exist.
Magnetic moment,μ=

Q25 :What is meant by stability of a coordination compound in solution? State the factors which govern stability of complexes.
Answer :
The stability of a complex in a solution refers to the degree of association between the two species involved in a state of equilibrium. Stability can be expressed quantitatively in terms of stability constant or formation constant.

For this reaction, the greater the value of the stability constant, the greater is the proportion of ML3 in the solution.
Stability can be of two types:
(a) Thermodynamic stability:
The extent to which the complex will be formed or will be transformed into another species at the point of equilibrium is determined by thermodynamic stability.
(b) Kinetic stability:
This helps in determining the speed with which the transformation will occur to attain the state of equilibrium.
Factors that affect the stability of a complex are:
(a) Charge on the central metal ion: Thegreater the charge on the central metal ion, the greater is the stability of the complex.
Basic nature of the ligand: A more basic ligand will form a more stable complex.
Presence of chelate rings: Chelation increases the stability of complexes.

Q26 :What is meant by the chelate effect? Give an example.
Answer :
When a ligand attaches to the metal ion in a manner that forms a ring, then the metal- ligand association is found to be more stable. In other words, we can say that complexes containing chelate rings are more stable than complexes without rings. This is known as the chelate effect.
For example: 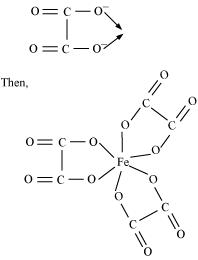 Q32 :What will be the correct order for the wavelengths of absorption in the visible region for the following:
[Ni(NO2)6]4-, [Ni(NH3)6]2+, [Ni(H2O)6]2+
Answer :
The central metal ion in all the three complexes is the same. Therefore, absorption in the visible region depends on the ligands. The order in which the CFSE values of the ligands increases in the spectrochemical series is as follows:
H2O < NH3 < NO2–
Thus, the amount of crystal-field splitting observed will be in the following order: