Q1. What is the role of the ideas of separation and hierarchy in the caste system?
Ans. The caste system can be understood as the combination of two sets of principles, one based on difference and separation and the other on wholism and hierarchy.
Each caste is different and strictly separated from every other caste on the basis of restrictions. These restrictions are related to marriage, food sharing and social interaction to occupation.
Different and separated castes do not have an individual existence. They exist in relation to a larger whole. This societal whole or system is a hierarchical rather than egalitarian system.
Each individual caste follows an ordered rank—a particular position in a ladder like arrangement going from highest to lowest.
The hierarchical ordering of castes is based on the distinction between purity and pollution.
Castes that are considered ritually pure have high status, while those considered less pure or impure have low status.
Historians believe that those who were defeated in wars were often assigned low caste status.
Castes are not only unequal in ritual terms. They are complementary and non competing groups. It means each caste has its own place in the system which cannot be taken by any other caste.
Caste is also linked with occupation, the system functions as a social division of labour. It allows no mobility.This idea of separation and hierarchy has inculcated discrimination, inequality and prejudices in Indian society.

Q2. What are some of the rules that the caste system imposes?
Ans. The most commonly cited rules that the caste system has imposed are as follows:
•Caste is determined by birth-a child inherits the “bom information” the caste of its parents. One can never change one’s caste, leave it, or choose not to join it. Caste is never a matter of choice.
•Membership in a caste involves strict rules about marriage. Caste groups are “endogamous” i.e. marriage is restricted to members of the group.
•Members of a particular caste have to follow rules about food and food sharing.
•An individual bom into a caste could only practice the occupation associated with that caste, so that occupations were hereditary.
•Caste involves hierarchy of rank and status. Every person has a caste. Every caste has a caste. Every caste has a specified place in the hierarchy of all castes.
•Castes involve sub-division within themselves. Sometimes sub-castes may also have sub-caste i.e. segmental organisation.

Q3.What changes did colonialism bring about in the caste system?
Ans. The institution of caste underwent major changes during the colonial period.
Present status of caste in India is more a product of colonialism than of ancient Indian tradition.
The British administrators tried to understand the complexities of caste in an effort to leam how to govern the country efficiently.
The most important official effort to collect information on caste was through census. It began in 1860s.
The 1901 census under the direction of Herbert Risley was particularly important as it sought to collect information on the social hierarchy of caste i.e. the social order of precedence in particular regions, as to the position of each caste in the rank order.
The counting of caste and to officially recording of caste made this institution of caste identity became more rigid in India.
The land revenue settlements and laws gave legal recognition to the caste based rights of the upper caste.
Large scale irrigation schemes were accompanied by efforts to settle population there, and these also had caste dimension.
So colonialism brought about major changes in the institution of caste. In short the Britishers took initiative in following areas:
(i) Census-to make sure of number and sizes of the castes and sub-castes.
(ii) To understand the values, beliefs and customs of different sections of society.
(iii) Land settlement.

Q4.In what sense has caste become relatively ‘invisible’ for the urban upper castes?
Ans. The changes in the caste system benefited the most were urban middle and upper class. Caste status ensured these groups the necessary economic and educational resources and they took full advantage of the opportunities offered by rapid development. Particularly the upper caste elite were able to benefit from subsidised public education, specially professional education in science, technology, medicine and management. They were also able to take advantages of the expansion of state sector jobs in the early decades after independence. Because of this earlier load over the rest of the society in terms of education ensured a privileged status.
For the so called SC and ST and backward castes this change became detrimental. For these the caste became all too visible. They had not inherited educational and social capital and they had to compete with already established upper caste group.They cannot afford to abandon their caste identity.They continue to suffer from discrimination of various kinds. 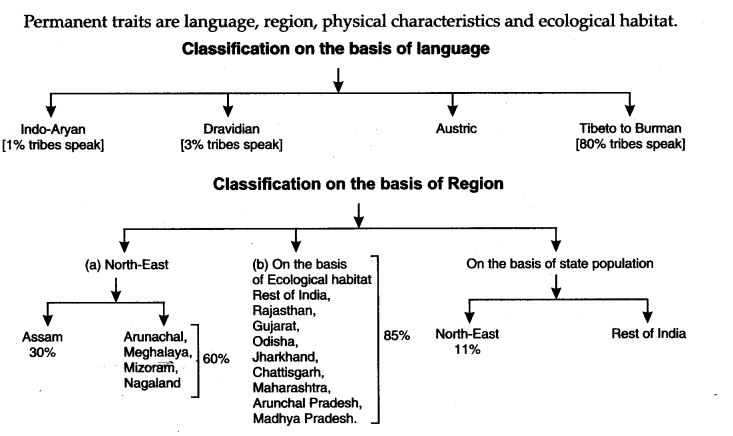 Classification on the basis of size:
In terms of size, tribals range between seven million to less than 100 person (In Andaman Nicobar Islands). The biggest tribes are the Gonds, Bhils, Santhals, Oraons, Minas, Bodos, and Mundas each at least a million people. The tribals in India shared 8.2% of total population i.e. 85 million people according to 2001 census. 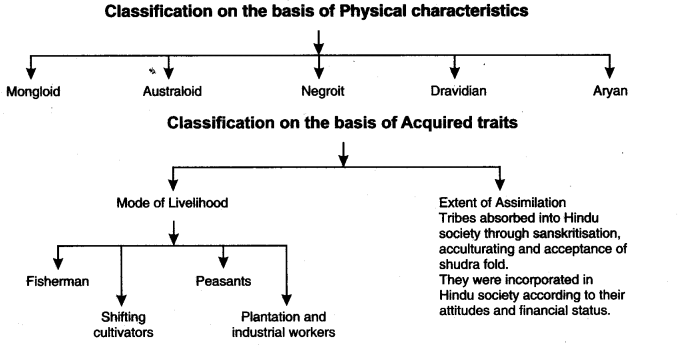 Q6.What evidence would you offer against the view that ‘tribes are primitive communities living isolated lives untouched by civilisation?
Ans. There is no reason to believe that tribes are out of contact with the rest of world or have always been the oppressed section of the society. This can be said because of the following reasons:
1.Gond Kingdoms in central India such as that of Garha Mandla or Chanda.
2.Many of the Rajput Kingdoms of central and western India emerged through a process of stratification among adivasi communities themselves.
3.Adivasi often exercised dominance over the plains people through their capacity to raid them and through their services as local militias.
4.They also occupied a special trade niche, trading forest produce, salts and elephants.
Evidences substantiating tribes as primitive communities:
1.Tribes have not a state or political form of the normal kind.
2.They have no written rules on religion.
3.They are neither Hindus nor peasants.
4.Primarily they are engaged in activities like food gathering, fishing, hunting, agriculture etc.
5.The habitat of tribes is in dense forests and mountainous regions.

Q7. What are the factors behind the assertion of tribal identities today?
Ans.
• Forced incorporation or tribal communities has had a negative impact on tribal cultures and,sodety as much as its economy.
•Tribal identities are today formed by interactional process.
•Because this interactional process has not been in favour of the tribes, many tribal identities are based on ideas of resistance and opposition to the overwhelming force of the non-tribal world.
•The positive impact of success such as the achievement of statehood for Jharkhand and Chhattisgarh, is marred by continuous problems. Many citizens of the north¬eastern states have been living under special laws that limit their civil liberties. The vicious circle of armed rebellions provoking state repression which in turn fuels further rebellions has taken a heavy toll on the culture, economy, and society of these north-eastern states.
•Gradual emergence of an educated middle class in conjunction with the policy of reservation is creating an urbanised professional dass. As tribal societies get more and more differentiated i.e. developed dass and other division within themselves, current bases grow for the assertion of tribal identity.
•These issues are categorised to control over vital economic resources like land and specially forests, and issues relating to matters of ethnic-cultural identity.
•Due to vision within the tribes, the reason for asserting tribal identity may be different for different group of tribals.

Q8. What are some of the different forms that the family can take?
Ans. Family is a very important sodal institution. In either form i.e. nudear or extended, it has post to perform. Lately, a lot of changes have come about in the structure for example, those people employed in the software industry have odd working to this, grandparents have shifted in as caregivers to young.
A family could be headed by a male or female; descent could be traced from the mother or the father. This structure and composition of the family is based on various fadors ‘ such as economy, polity, culture and education.
The changes in the structure of family that we see today could be
(i)Same sex marriage
(ii)Love marriage
But history and contemporary times suggest that such changes are met with violent reactions.
Nuclear Family: It consists of one set of parents and their children.
Extended Family: It consisted of more than one couple and, often, more than two generations live together. The extended family is symptomatic of India.
Diverse forms of family (i) Matrilocal-patrilocal (based on residence)
(ii) Matrilineal and patrilineal (based on rules of inheritance)
(iii) Matriarchal and patriarchal (based on authority)

Q9. In what ways can changes in social structure lead to changes in the family structure?
Ans. The structure of family can be seen as social institution and also in its relationship to other social institution of society.
•The internal structure of the family is usually related to other structure of society i.e. political, economic, cultural, etc. Therefore any significant change in behaviour pattern of members of family may change the nature of society for example working schedules of young parents in the software industry in India may lead to increasing number of grandparents moving in as caregivers to the young grand children.
•The composition of the family and its structure thereby changes. And these changes can be understood in relation to other changes in society.
•The family (the private sphere) is linked to the economic, political, cultural and educational (the public) spheres.
•Sometimes the changes in the families and corresponding changes in the society occur accidently e.g. due to war or riots people migrate in search of work or for security reasons.
•Sometimes these changes are purposefully brought about, e.g. due to independence and openness of ideas, people choosing their jobs, life partner and life style and such changes are very frequent in the Indian society.

Q10. Explain the difference between matriliny and matriarchy.
Ans. Matriliny.
•Societies of Meghalaya Khasi, Jaintia, Garo tribes and societies of Kerala, Nayyar family property inheritance goes from mother to daughter whereas control passes from maternal uncle to Nephew.
•It means a women inherits property from mother and passes on to her daughter while a man controls his sister’s property and passes on control to his sister’s son.
•This matriliny generates intense role conflict for men because they are in conflict between their responsibilities to their own house on the one hand and to their wife and children on the other-“Should I pay more attention to my family or my sister’s family.”
This role conflict is for woman also.
She possesses only token authority, men are the defacto powerholders. Despite matriliny men are the powerholders.
Matriarchy
•In such societies the women exercise authority and play dominant role.
•Practically it is only a theoretical concept as it never allows the women to have real power of dominance.
•Realistically it is not existed even in matrilineal families.