Q3 : Project/Activity
Locate the peaks, passes, ranges, plateaus, hills, and duns hidden in the puzzle. Try to find where these features are located. You may start your search horizontally, vertically or diagonally. 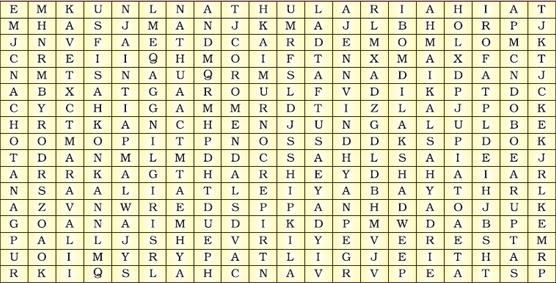 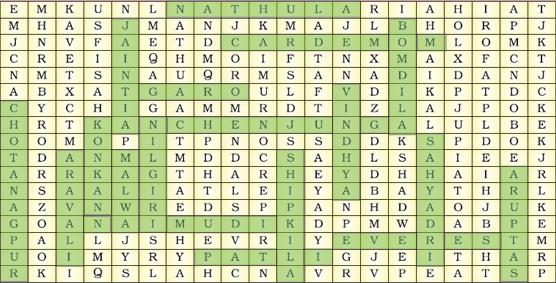 Q4 : Distinguish between
(i)Converging and diverging tectonic plates
(ii) Bhangarand Khadar
(iii) Western Ghats and Eastern Ghats
Answer :
(i)The Earth’s crust is broken up into several lithospheric or tectonic plates. These plates are constantly moving atop the Earth’s mantle (semi-solid layer of molten rocks). Based upon their motion, tectonic plates are referred to as converging or diverging. Converging tectonic plates move towards each other and form convergent boundary. Diverging tectonic plates move away from each other and form divergent boundary.
(ii)Bhangaris the terrace-like feature present above the flood plains of the rivers. It is composed of older alluvium. It is the largest part of the Northern Plain. The soil of this region contains calcerous deposits locally known as kankar.
The newer, younger deposits of the flood plains are called khadar. This region is very fertile as it gets renewed almost every year. Hence, it is ideal for intensive agriculture.
(iii)

Q5 : Describe how the Himalayas were formed.
Answer :
According to the Theory of Plate Tectonics, the Earth’s crust was initially a single, giant super-continent called Pangea. Its northern part was the Angara land and the southern part was the Gondwana land. The movement of the molten material below the Earth’s crust caused the crust or the lithosphere to break up into a number of large fragments called lithospheric or tectonic plates. Another important feature of the Earth’s crust at the time was the geosynclineâ€”a narrow, shallow, elongated basin with a sinking bottom in which a considerable thickness of sediments were deposited by the rivers coming from Angara land and Gondwana landâ€”called the Tethys. After separating from the Gondwana land, the Indo-Australian Plate drifted towards the north in the direction of the Eurasian Plate. This resulted in the collision of the two plates, and due to this collision, the sedimentary rocks in the Tethys got folded to form the mountain system of western Asia and the Himalayas.

Q8 : Write short notes on the following.
(i) The Indian Desert
(ii) The Central Highlands
(iii) The Island groups of India
Answer :
(i) Lying towards the west of the Aravali Hills, the Indian Desert is an undulating sandy plain covered with crescent-shaped and longitudinal sand dunes. This region is characterised by very little rainfall, an arid climate and low vegetation cover. Streams appear only during the rainy season. Luni is the only large river in this region.
(ii) The part of the Peninsular Plateau lying to the north of the Narmada River, covering a major area of the Malwa Plateau, is known as the Central Highlands. They are bound by the Vindhya Range from the south and by the Aravali Hills from the northwest. The further westward extension merges with the Indian Desert while the eastward extension is marked by the Chotanagpur Plateau. The rivers draining this region flow from southwest to northeast. The Central Highlands are wider in the west but narrower in the east.
(iii) India has two groups of islands. The Lakshadweep Islands lie in the Arabian Sea, to the southwest of the mainland. The Andaman and Nicobar Islands lie in the Bay of Bengal, to the southeast of the mainland.
Lakshadweep is composed of small coral islands, covering a small area of 32 square kilometres. Kavaratti Island is its administrative headquarters. The Andaman and Nicobar Islands are bigger in size and are more numerous and scattered. The entire group of islands is divided into Andaman (in the north) and Nicobar (in the south).
Both these island groups are rich in flora and fauna, and are of great strategic importance to the country.