(c)The grasses, shrubs, and trees that grow on their own without any human interference or help are termed natural vegetation. 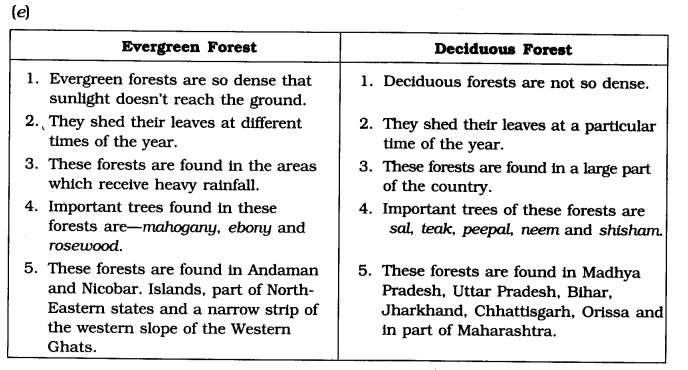 (a)Hot and dry winds known as………… blow during the day in summers.
(b)The states of Andhra Pradesh and Tamil Nadu receive a great amount of rainfall during the season of…………..
(c)…… forest in Gujarat is the home of……………
(d)…………….. is a well-known species of mangrove forests.
(e)………….. are also called monsoon forests.

Choose the correct option to complete the statements given below:

(i)Sundarbans is in ………..
(a) Andaman and Nicobar Islands (b) West Bengal
(c) Orissa (d) Madhya Pradesh.
(ii)Which one forms the group of migratory birds?
(a)Siberian Crane, Flamingo and Crow (b)Sparrow, Crow and Stork
(c)Stork, Siberian Crane and Flamingo (d)Duck, Bulbul and geese.
(iii)These places experience moderate climate ………………
(a) Mumbai and Kolkata (b) Patna and Lucknow
(c) Bikaner and Jaisalmer (d) Ranchi and Asansol.
(iv) Elephants and one-homed rhinoceroses are found in the forests of……………………
(a) Assam (b) Gujarat.
(c) Kerala (d)Karnataka.
(v)Wild life week is observed every year in the first week of
(a) November (b) August
(c) September (d) October.

Fill in the blanks with appropriate words to complete each sentence:
(i)Camels and wild asses are found in the ……….. and the ……….
(ii) ……… in Rajasthan receives least rainfall.
(iii) Tropical Rain Forests occur in the areas which receive ………….. rainfall.
(iv) Cold weather season remains from………… to ………..
(v) The climate of India has been described as ………….. type.
(vi) The roots of the plants kind the………….. , thus, they control soil erosion.
(vii) Parrots, pigeons, geese, etc. are examples of ……….. birds.
Answer: (i) Great Indian desert, Rann of Kuchchh
(ii) Jaisalmer (iii) heavy
(iv) December, February (v) Monsoon
(vi) bind (vii)common

State whether these sentences are true (I) or false (F).
(i) During the winter season, the sun rays fall directly in the region.
(ii)Due to India’s location in the tropical region, most of the rain is brought by monsoon winds.
(iii)Tropical rainforests are not very dense.
(iv) Tropical rainforests are also called monsoon forests.
(v) Thorny buses are found in dry areas of the country.
(vi) Siberian Crane, Stork, Flamingo, etc. migrate to our country in the winter season every year.
Answer: (i) False, (ii) True, (iii) False, (iv) False, (v) True, (vi) True.

Q1. What happens in the season of the retreating monsoons? [Imp.]
Answer: Winds move back from the mainland to the Bay of Bengal. ,

Q2. What is climate?
Answer: Climate is the average weather condition, which has been measured over many years.

Q4. Name the two regions of Rcgasthan which are very hot.
Answer: Jaisalmer and Bikaner.

Q5. Name the two regions of Jammu and Kashmir which are very cold or freezing cold.
Answer: Drass and Kargil.

Q7. What are called bushes?

Q8. Where are thorny bushes found?
Answer: Thorny bushes are found in the states of Rajasthan, Punjab, Haryana, Eastern slopes of Western Ghats and Gujarat.

Q9. What is the special feature of mountain vegetation?
Answer: The trees are conical in shape.

Q4. Mention the main features of thorny bushes.
Answer: (i) Thorny bushes are found in dry areas of the country.
(ii)The leaves are in the form of spines to reduce the loss of water.
(iii)Cactus, khair, babool, keekar are important thorny bushes.
(iv) They are found in the states of Rajasthan, Punjab, Haryana, Eastern slopes of Western Ghats and Gujarat.

Q5. Write a note on mountain vegetation.
Answer: Mountains are homes of various species of trees. They are found according to the variation in height. With increase in height, the temperature falls. At a height between 1500 metres and 2500 metres most of the trees are conical in shape. Such trees are called coniferous trees. Mountain vegetation includes trees such as chir, pine and deodar.

Answer: Forests play a vital role in the life of the human beings and in their absence we can’t imagine life. Plants release oxygen that we breathe and absorb carbon dioxide. The roots of the plants bind the soil and in this way check soil erosion. We get several things from the forests, such as wood for furniture, fuel, fodder, medicinal herbs, honey, lac, gum, fruits etc.Forests provide natural habitat to the wildlife, such as lions, tigers, elephants, monkeys, etc.As forests are so beneficial for us, we must make efforts to conserve it.

Q7. What should we do to conserve wildlife? [V. Imp.]
Answer: We must not involve in hunting and poaching of wild animals. We can refuse to buy things made from parts of the bodies of animals such as their bones, horns, fur, skins and feathers. It will be an effective way to conserve wildlife. We should participate in the wildlife week which falls in the first week of October and try to create awareness of conserving the habitats of the animal kingdom.

Q1. Explain different types of seasons found in India
Answer: Four major seasons are found in India:
(i) Cold Weather Season (Winter). This season occurs in the month of December and lasts upto the month of February. During this season temperature remains cold in the northern India because the sunrays do not fall directly in the region.

(iii) South West monsoon season (Rainy season). This season is marked by the advent and advance of monsoon. The winds blow from Arabian sea and Bay of Bengal towards the land. They carry moisture with them. When these winds strike the mountain barriers it begins raining.

Answer: Five different types of vegetation is found in India:
(I) Tropical rain forests. These forests are found in areas that receive heavy rainfall. They are very dense and sunlight never reach the ground.

The trees of these forests shed their leaves at different times of the year. Therefore, they always appear green are called evergreen forests. Important trees of these forests are mahogany, ebony, and rosewood. They are found in Andaman and Nicobar Islands, parts of North-Eastern states, and a narrow strip of the western slope of the Western Ghats.

(ii) Tropical deciduous forests. These forests are also known as monsoon forests and are found in a large part of the country. They are less dense. They shed their leaves at a particular time of the year. Sal, teak, neem, peepal and shisham are important trees found in these forests. Madhya Pradesh, Uttar Pradesh, Bihar, Jharkhand, Chhattisgarh, Orissa, etc. are home of these forests.

(iv) Mountain Vegetation. A variety of trees are found in the mountains. They are conical in shape. Hence trees are called conical trees. Chir, pine and deodar are important trees of these forests.

(v) Mangrove Forests. These forests grow in saline water. They are found in Sundarbans in west Bengal and in the Andaman and Nicobar islands. Sundari is a well-known species of trees in mangrove-forests.

Q3. Describe the wildlife of India [V. Imp.]
Answer: Forests are home to wildlife, which include several species of animals and a variety of reptiles, amphibians, mammals, birds, insects, and worms.

Our country is rich in birdlife too. Peacock is our national bird. Other common birds are parrots, pigeons, mynah, geese, bulbul, and ducks. Several bird sanctuaries have been established to protect different species of birds.,
There are hundreds of species of snakes found in India. Cobras and Kraits are important among them.