Q3. Why were metals, writing, the wheel and the plough important for the Harappans?
Answer:
Metals were used for Copper and bronze: Making tools, weapons, ornaments, vessels. Gold and silver: Ornaments, vessels.
Writing has always been a very important means of communication. It was important for the Harappans also.
The wheel was used in carts and pottery.
The plough was used to dig the earth for turning the soil and for planting seeds. 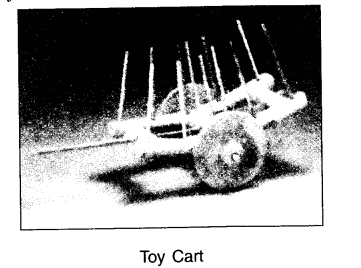 Q5. Make a list of what the Harappans ate, and put a tick mark against the things you eat today.
Answer: 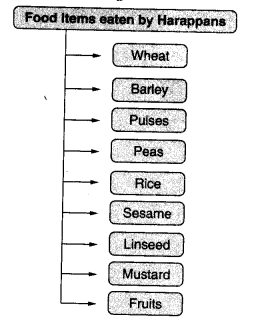 Note: Depending upon where you live, and with the help of your teacher, select the food items eaten by you.

Q7.Describe three important buildings in your city or village. Are they located in a special part of the settlement (e.g. the centre)? What are the activities that take place in these buildings?
Answer: The answer to this question depends on the city/village you live in. Take the help of your teacher to prepare the answer.

Q8. Are there any old buildings in your locality? Find out how old they are and who looks after them.
Answer: The answer to this question depends on the locality you live in. Take the help of your teacher to prepare the answer.

Fill in the blanks with appropriate words to complete each sentence:
(i) The western part of Harappan cities, which was usually smaller but higher, has been referred to as the ……………..
(ii)The eastern part of Harappan cities, which was usually larger but lower, has been referred to as the ……………
(iii)The Great Bath was made water tight with a layer of………………….
(iv) Scribes were people who knew how to ………………
(v) Metals like gold and silver were used to make …………… and ………….
(vi) Most Harappan seals are made of………………
(vii) Archaeologists have found spindle wheels, made of terracotta and ………………….
(viii) Spindle whorls were used to …………….
(ix) The Harappans got copper from the present day…………………
(x) A tool called……….. was used to dig the earth for turning the soil and planting seeds.
(xi)…… must have been used by farmers since the region of Harappa did not receive heavy rainfall.
(xii)Sealings are impressions of seals on ……………
Answer: (i) Citadel(ii) lower town (iii) natural tar (iv) write (v) ornaments, vessels(vi) stone(vii) faience(viii) spin thread(ix) Rajasthan(x) plough(xi) Irrigation(xii) clay.

State whether these sentencesare true (T) or false (F).
(i)The bricks in Harappa were laid in an interlocking pattern and that made the walls strong.
(ii)Usually, the special buildings were created in the lower town.
(iii)The houses of Harappa were poorly built.
(iv) Harappan seals were made of metal
(v)People knew about cotton much before Harappa.
(vi) All raw materials were available locally.
(vii) The hunter-gatherers used some form of irrigation.
(viii) The rainfall,was low in the Harappa region.
(ix) We are not sure about what caused the end of the Harappari civilization.
Answer: (i)—T, (ii)—F, (iii)—F, (iv)—F, (v)—T, (vi)—F, (vii)—F, (viii)—T, (ix)—T.

Q2. How old are Harappa cities believed to be?
Answer: Harappa and other such cities are believed to have developed 4700 years ago.

Q3. What was the citadel?
Answer: The western part of most cities was smaller but higher, described as ‘citadel’ by archaeologists.

Q4. Give some important features of the Great Bath. [V. Imp.]
Answer: The Great Bath was lined with bricks, Coated with plaster, and made water tight with natural tar.

Q7. What were objects in Harappan cities made of?
Answer: Most Harappan objects were made of stone, shell and metal.

Q8. How do we know that cotton was grown in Mohenjodaro? [V. Imp.]
Answer: Archaeologists have found pieces of cloth with vases and other objects in Mohenjodaro. So cotton must have been grown.

Q9.Who was a ‘specialist’ in Harappan context? –
Answer: A specialist was one who was trained to do one kind of work, e.g. cutting stone, polishing beads, or carving seals.

Q10. Define ‘raw material.
Answer: Raw materials are substances that are either found naturally or produced by farmers or herders.

Q12. What was the use of the plough? [V. Imp.]
Answer: A plough was used to dig the earth for turning the soil and planting seeds.

Q14. Where did people move to from Sind?
Answer: People moved into newer and smaller settlements to the east and the south.

Q2. How were bricks laid in houses of Harappan cities?
Answer: Bricks were so well made that they have lasted for thousand of years. They were laid in an interlocking pattern and this made the walls strong. Many of these bricks were taken away by engineers about a hundred and fifty years ago.

Q3. Describe the drains of the cities. [V. Imp.]
Answer: Most cities had covered drains. They were laid out carefully in straight lines. Each drain had a gentle slope. Thus, water could flow easily through it. Drains in houses were connected to those on the streets and smaller drains led to bigger ones.

Q6. Write a short note on the city of Lothal. [V. Imp.]
Answer: Lothal was a city on the banks of a tributary of the Sabarmati. It was an important centre for making stone, shell and metal objects. There was a store house in the city. Fire altars have been found here.

Q1. Describe the people of Harappan cities. [V. Imp.]
Answer: There were three basic occupations of people living in Harappan cities.
(i)They planned the construction of special buildings in the city. They probably sent people to distant lands to get raw material. They kept the most valuable objects for themselves.
(ii)Scribes were people who knew how to write. They prepared the seals.
(iii) Crafts-persons. People who made all kinds of things were called Crafts- persons.
Besides these three categories, there were the farmers and herders who lived outside the city and provided food to the people.

Q3. What could have been the possible reasons behind the end of the Harappan civilization? [V. Imp.]
Answer: The Harappan civilization suddenly seems to have started to end, around 3900 years ago. People stopped living in many cities. Writing, seals and weights became ‘extinct’. Raw materials were now rarely imported.
Some scholars suggest that this happened due to the drying of rivers. Some others have explained it with deforestation. In some areas there were floods. The floods could have been a reason for the end.
Rulers might also have lost control. Consequently, People abandoned sites in Sind and Punjab and moved to newer, smaller settlements to the east and the south.