Q3 :Why is sodium kept immersed in kerosene oil?
Answer :
Sodium and potassium are very reactive metals and and combine explosively with air as well as water. Hence, they catch fire if kept in open. Therefore, to prevent accidental fires and accidents, sodium is stored in kerosene oil.

Q4 :Write equations for the reactions of
(i) iron with steam
(ii) calcium and potassium with water
Answer :

(i) B is the most reactive metal.
(ii) If B is added to a solution of copper (II) sulphate, then it would displace copper.
B + CuSO4 → Displacement
(iii) The arrangement of the metals in the order of decreasing reactivity is:
B > A > C > D

Q10 :Define the following terms.
(i) Mineral (ii) Ore (iii) Gangue
Answer :
(i) Mineral: Most of the elements occur in nature as in combined state as minerals. The chemical composition of minerals is fixed.
(ii) Ore: Minerals from which metals can be extracted profitably are known as ores.
(iii) Gangue: The impurities (sand, silt, soil, gravel, etc.) present in the ore are called gangue.

Q11 :Name two metals which are found in nature in the free state.
Answer :
The metals at the bottom of the reactivity series are mostly found in free state. For example: gold, silver, and platinum.

Manganese dioxide is reduced to manganese by treating it with aluminium powder. In this case, aluminium displaces manganese from its oxide.

Oxides of more reactive metals are reduced by electrolysis.

Q13 :Metallic oxides of zinc, magnesium and copper were heated with the following metals.

In which cases will you find displacement reactions taking place?
Answer :

Q14 :Which metals do not corrode easily?
Answer :
More reactive a metal is, more likely it is to be corroded. Therefore, less reactive metals are less likely to get corroded. This is why gold plating provides high resistance to corrosion.

Q15 :What are alloys?
Answer :
Alloys are homogeneous mixtures of two or more elements. The elements could be two metals, or a metal and a non-metal. An alloy is formed by first melting the metal and then dissolving the other elements in it. For example, steel is an alloy of iron and carbon.

Q9 :Pratyush took sulphur powder on a spatula and heated it. He collected the gas evolved by inverting a test tube over it, as shown in figure below. 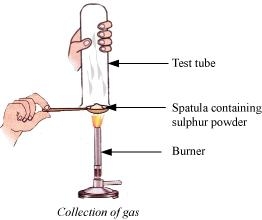 Q10 :State two ways to prevent the rusting of iron.
Answer :
Two ways to prevent the rusting of iron are:
(i) Oiling, greasing, or painting: By applying oil, grease, or paint, the surface becomes water proof and the moisture and oxygen present in the air cannot come into direct contact with iron. Hence, rusting is prevented.
(ii) Galvanisation: An iron article is coated with a layer of zinc metal, which prevents the iron to come in contact with oxygen and moisture. Hence, rusting is prevented.

Q14 :Differentiate between metal and non-metal on the basis of their chemical properties.
Answer :

Q15 :A man went door to door posing as a goldsmith. He promised to bring back the glitter of old and dull gold ornaments. An unsuspecting lady gave a set of gold bangles to him which he dipped in a particular solution. The bangles sparkled like new but their weight was reduced drastically. The lady was upset but after a futile argument the man beat a hasty retreat. Can you play the detective to find out the nature of the solution he had used?
Answer :
He must have dipped the gold metal in the solution of aqua regia – a 3:1 mixture of conc. HCl and conc. HNO3. Aqua regia is a fuming, highly corrosive liquid. It dissolves gold in it. After dipping the gold ornaments in aqua regia, the outer layer of gold gets dissolved and the inner shiny layer appears. That is why the weight of gold ornament reduced.

That is why copper is used to make hot water tanks, and not steel.