Question : Solutions of Questions on Page Number : 143
Q1 :If a trait A exists in 10% of a population of an asexually reproducing species and a trait B exists in 60% of the same population, which trait is likely to have arisen earlier?
Answer :
In asexual reproduction, the reproducing cells produce a copy of their DNA through some chemical reactions. However, this copying of DNA is not accurate and therefore, the newly formed DNA has some variations. 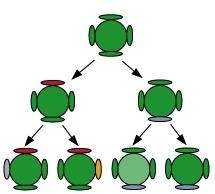 Itcan be easily observed in the above figure that in asexual reproduction, very few variations are allowed. Therefore, if a trait is present in only 10% of the population, it is more likely that the trait has arisen recently. Hence, it can be concluded that trait B that exists in 60% of the same population has arisen earlier than trait A.

Q2 :How does the creation of variations in a species promote survival?
Answer :
Sometimes for a species, the environmental conditions change so drastically that their survival becomes difficult. For example, if the temperature of water increases suddenly, most of the bacteria living in that water would die. Only few variants resistant to heat would be able to survive. If these variants were not there, then the entire species of bacteria would have been destroyed. Thus, these variants help in the survival of the species.
However, not all variations are useful. Therefore, these are not necessarily beneficial for the individual organisms.

Q3 :How do Mendel’s experiments show that traits may be dominant or recessive?
Answer :
Mendel selected true breeding tall (TT) and dwarf (tt) pea plants. Then, he crossed these two plants. The seeds formed after fertilization were grown and these plants that were formed represent the first filial or F1 generation. All the F1 plants obtained were tall. 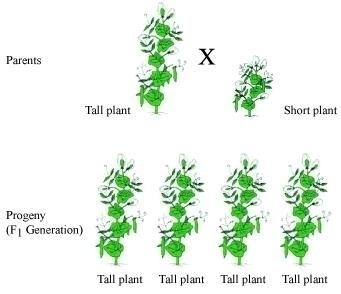 Cross-pollination of tall and short plant
Then, Mendel self-pollinated the F1 plants and observed that all plants obtained in the F2 generation were not tall. Instead, one-fourth of the F2 plants were short. 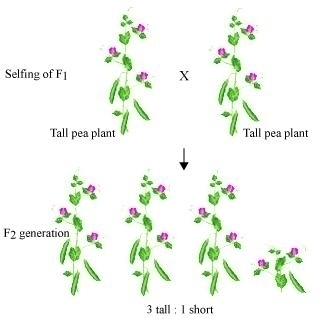 Self-pollination of F1 plants
From this experiment, Mendel concluded that the F1tall plants were not true breeding. They were carrying traits of both short height and tall height. They appeared tall only because the tall trait is dominant over the dwarf trait. 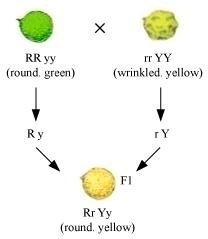 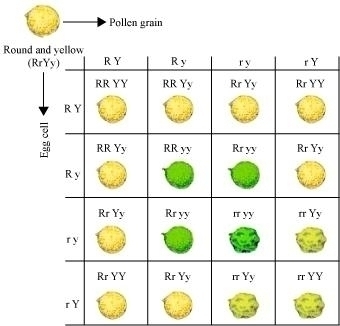 Independent inheritance of two different traits
In the above cross, more than two factors are involved, and these are independently inherited. 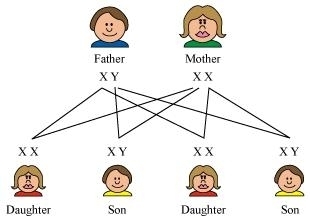 Sex determination in humans
Thus, the mother provides only X chromosomes. The sex of the baby is determined by the type of male gamete (X or Y) that fuses with the X chromosome of the female.

Q8 :Why are traits acquired during the life-time of an individual not inherited?
Answer :
This happens because an acquired trait involves change in non-reproductive tissues (somatic cells) which cannot be passed on to germ cells or the progeny. Therefore, these traits cannot be inherited.

Q10 :What factors could lead to the rise of a new species?
Answer :
Natural selection, genetic drift and acquisition of traits during the life time of an individual can give rise to new species.

Q13 :Give an example of characteristics being used to determine how close two species are in evolutionary terms.
Answer :
The presence of feathers in dinosaurs and birds indicates that they are evolutionarily related. Dinosaurs had feathers not for flying but instead these feathers provided insulation to these warm-blooded animals. However, the feathers in birds are used for flight. This proves that reptiles and birds are closely related and that the evolution of wings started in reptiles.

Q15 :What are fossils? What do they tell us about the process of evolution?
Answer :
Fossils are the remains of organisms that once existed on earth. They represent the ancestors of plants and animals that are alive today. They provide evidences of evolution by revealing the characteristics of the past organism and the changes that have occurred in these organisms to give rise to the present organisms.

Q16 :Why are human beings who look so different from each other in terms of size, colour and looks said to belong to the same species?
Answer :
A species is a group of organisms that are capable of interbreeding to produce a fertile offspring. Skin colour, looks, and size are all variety of features present in human beings. These features are genetic but also environmentally controlled. Various human races are formed based on these features. All human races have more than enough similarities to be classified as same species. Therefore, all human beings are a single species as humans of different colour, size, and looks are capable of reproduction and can produce a fertile offspring.

Q17 :In evolutionary terms, can we say which among bacteria, spiders, fish and chimpanzees have a ‘better’ body design? Why or why not?
Answer :
Evolution cannot always be equated with progress or better body designs. Evolution simply creates more complex body designs. However, this does not mean that the simple body designs are inefficient. In fact, bacteria having a simple body design are still the most cosmopolitan organisms found on earth. They can survive hot springs, deep sea, and even freezing environment.
Therefore, bacteria, spiders, fish, and chimpanzees are all different branches of evolution.

Q5 :How are the areas of study – evolution and classification – interlinked?
Answer :
Classification involves grouping of organism into a formal system based on similarities in internal and external structure or evolutionary history.
Two species are more closely related if they have more characteristics in common. And if two species are more closely related, then it means they have a more recent ancestor.
For example, in a family, a brother and sister are closely related and they have a recent common ancestor i.e., their parents. A brother and his cousin are also related but less than the sister and her brother. This is because the brother and his cousin have a common ancestor i.e., their grandparents in the second generation whereas the parents were from the first generation.
With subsequent generations, the variations make organisms more different than their ancestors.
This discussion clearly proves that we classify organisms according to their resemblance which is similar to creating an evolutionary tree.

Q6 :Explain the terms analogous and homologous organs with examples.
Answer :
Homologous organs are similar in origin (or are embryologically similar) but perform different functions. For example, the forelimbs of humans and the wings of birds look different externally but their skeletal structure is similar. It means that their origin is similar (as wings in birds are modifications of forearm) but functions are different – the wings help in flight whereas human forearm helps in various activities. 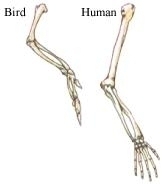 Homologous organs
Analogous organs, in the other hand, have different origin but perform similar functions. For example, the wings of a bird and a bat are similar in function but this similarity does not mean that these animals are more closely related. If we carefully look at these structures, then we will find that the wings of a bat are just the folds of skin that are stretched between its fingers whereas the wings of birds are present all along the arm. Therefore, these organs are analogousorgans.

Q7 :Outline a project which aims to find the dominant coat colour in dogs.
Answer :
Dogs have a variety of genes that govern coat colour. There are at least eleven identified gene series (A, B, C, D, E, F, G, M, P, S, T) that influence coat colour in dog.
A dog inherits one gene from each of its parents. The dominant gene gets expressed in the phenotype. For example, in the B series, a dog can be genetically black or brown.
Let us assume that one parent is homozygous black (BB), while the other parent is homozygous brown (bb)

Q8 :Explain the importance of fossils in deciding evolutionary relationships.
Answer :
Fossils are the remains of the organism that once existed on earth. They represent the ancestors of the plants and animals that are alive today. They provide evidences of evolution by revealing the characteristics of the past organisms and the changes that have occurred in these organisms to give rise to the present organisms. Let us explain the importance of fossils in deciding evolutionary history with the help of the following example.
Around 100 million years ago, some invertebrates died and were buried in the soil in that area. More sediment accumulated on top of it turning it into sedimentary rock.
At the same place, millions of years later, some dinosaurs died and their bodies were buried on top of the sedimentary rock. The mud containing dinosaurs also turned into a rock.
Then, millions of years later, some horse-like creatures died in that area and got fossilized in rocks above the dinosaur fossils.
Some time later, due to soil erosion or floods in that area, the rocks containing horse-like fossils are exposed.
If that area is excavated deeper, then the dinosaur and invertebrates fossils can also be found. Thus, by digging that area, scientists can easily predict that horse-like animals evolved later than the dinosaurs and the invertebrates.
Thus, the above example suggests that the fossils found closer to the surface of the earth are more recent ones than the fossils present in deeper layers.

Q9 :What evidence do we have for the origin of life from inanimate matter?
Answer :
A British scientist, J.B.S. Haldane, suggested that life originated from simple inorganic molecules. He believed that when the earth was formed, it was a hot gaseous mass containing elements such as nitrogen, oxygen, carbon, hydrogen, etc. These elements combined to form molecules like water (H2O), carbon dioxide (CO2), methane (CH4), ammonia (NH3), etc.
After the formation of water, slowly the earth surface cooled and the inorganic molecules interacted with one another in water to form simple organic molecules such as sugars, fatty acids, amino acids, etc. The energy for these reactions was provided by solar radiations, lightning, volcanic eruptions, etc.
This was proved by the experiment of Stanley L. Miller and Harold C. Urey in 1953.
They took a mixture of water (H2O), methane (CH4), ammonia (NH3), and hydrogen gas (H2) in a chamber and sparks were passed through this mixture using two electrodes. After one week, 15% of the carbon from methane was converted into amino acids, sugars, etc. These organic molecules are polymerized and assembled to form protein molecules that gave rise to life on earth. 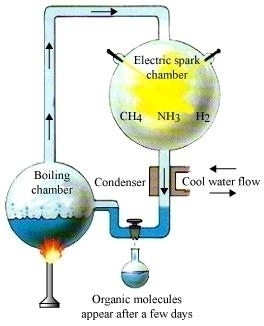 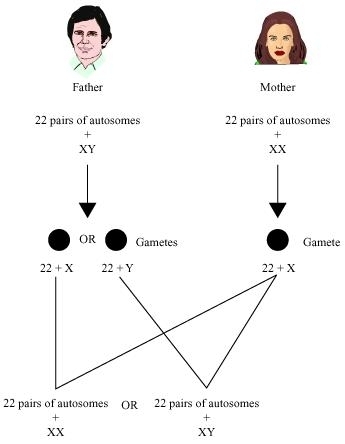 Q12 :Only variations that confer an advantage to an individual organism will survive in a population. Do you agree with this statement? Why or why not?
Answer :
In species, variations that offer survival advantages are naturally selected. Individuals adjust to their environments with the help of these selected variations and consequently these variations are passed on to their progeny. Evolution of organisms occurs as a result of this natural selection.
However, there can be some other variations, which do not offer any survival advantage and arise only accidentally. Such variations in small populations can change the frequency of some genes even if they are not important for survival.
This accidental change in the frequency of genes in small populations is referred to as genetic drift.
Thus, genetic drift provides diversity (variations) without any survival advantage.