Free NCERT Solutions for Class 12 Physics Chapter 1 Electric Charges And Fields solved by Expert Teachers as per NCERT (CBSE) Book guidelines and brought to you by Toppers Bulletin. These Electric Charges And Fields Exercise Questions with Solutions for Class 12 Physics covers all questions of Chapter Electric Charges And Fields Class 12 and help you to revise complete Syllabus and Score More marks as per CBSE Board guidelines from the latest NCERT book for class 12 Physics. You can read and download NCERT Book Solution to get a better understanding of all topics and concepts
2.1 – INTRODUCTION
2.2 – ELECTROSTATIC POTENTIAL
2.3 – POTENTIAL DUE TO A POINT CHARGE
2.4 – POTENTIAL DUE TO AN ELECTRIC DIPOLE
2.5 – POTENTIAL DUE TO A SYSTEM OF CHARGES
2.6 – EQUIPOTENTIAL SURFACES
2.6.1 – Relation between field and potential
2.7 – POTENTIAL ENERGY OF A SYSTEM OF CHARGES
2.8 – POTENTIAL ENERGY IN AN EXTERNAL FIELD
2.8.1 – Potential energy of a single charge
2.8.2 – Potential energy of a system of two charges in an external field
2.8.3 – Potential energy of a dipole in an external field
2.9 – ELECTROSTATICS OF CONDUCTORS
2.10 – DIELECTRICS AND POLARISATION
2.11 – CAPACITORS AND CAPACITANCE
2.12 – THE PARALLEL PLATE CAPACITOR
2.13 – EFFECT OF DIELECTRIC ON CAPACITANCE
2.14 – COMBINATION OF CAPACITORS
2.14.1 – Capacitors in series
2.14.2 – Capacitors in parallel
2.15 – ENERGY STORED IN A CAPACITOR
2.16 – VAN DE GRAAFF GENERATOR.

Where, ∈0 = Permittivity of free space

Q3 : Check that the ratio ke2/G memp is dimensionless. Look up a Table of Physical Constants and determine the value of this ratio. What does the ratio signify?
Answer :
The given ratio is.

Where,
G = Gravitational constant
Its unit is N m2 kg– 2.
me and mp = Masses of electron and proton.
Their unit is kg.
e = Electric charge.
Its unit is C.

Hence, the numerical value of the given ratio is

This is the ratio of electric force to the gravitational force between a proton and an electron, keeping distance between them constant. 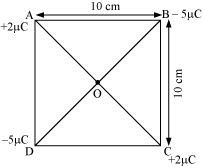 Q8 : Two point charges qA = 3 µC and qB = -3 µC are located 20 cm apart in vacuum.
(a) What is the electric field at the midpoint O of the line AB joining the two charges?
(b) If a negative test charge of magnitude 1.5 x 10-9 C is placed at this point, what is the force experienced by the test charge?
Answer :
(a) The situation is represented in the given figure. O is the mid-point of line AB.

along OB
Where,
∈0 = Permittivity of free space 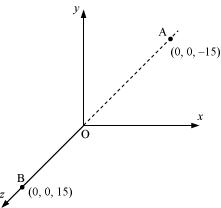 Therefore, the magnitude of the torque acting on the dipole is 10 N m.

Q12 : (a) Two insulated charged copper spheres A and B have their centers separated by a distance of 50 cm. What is the mutual force of electrostatic repulsion if the charge on each is 6.5 x 10-7 C? The radii of A and B are negligible compared to the distance of separation.
(b) What is the force of repulsion if each sphere is charged double the above amount, and the distance between them is halved?
Answer :
(a) Charge on sphere A, qA = Charge on sphere B, qB = 6.5 × 10-7 C
Distance between the spheres, r = 50 cm = 0.5 m
Force of repulsion between the two spheres,

Force of repulsion between the two spheres,

Q13 : Suppose the spheres A and B in Exercise 1.12 have identical sizes. A third sphere of the same size but uncharged is brought in contact with the first, then brought in contact with the second, and finally removed from both. What is the new force of repulsion between A and B?
Answer :
Distance between the spheres, A and B, r = 0.5 m
Initially, the charge on each sphere, q = 6.5 × 10– 7 C
When sphere A is touched with an uncharged sphere C, q/2 amount of charge from A will transfer to sphere C. Hence, charge on each of the spheres, A and C, is q/2.
When sphere C with charge q/2 is brought in contact with sphere B with charge q, total charges on the system will divide into two equal halves given as,

Each sphere will share each half. Hence, charge on each of the spheres, C and B, is

Q14 : Figure 1.33 shows tracks of three charged particles in a uniform electrostatic field. Give the signs of the three charges. Which particle has the highest charge to mass ratio?

Q15 : Consider a uniform electric field E = 3 x 103 î N/C. (a) What is the flux of this field through a square of 10 cm on a side whose plane is parallel to the yz plane? (b) What is the flux through the same square if the normal to its plane makes a 60° angle with the x-axis?
Answer :
(a) Electric field intensity,

Q16 : What is the net flux of the uniform electric field of Exercise 1.15 through a cube of side 20 cm oriented so that its faces are parallel to the coordinate planes?
Answer :
All the faces of a cube are parallel to the coordinate axes. Therefore, the number of field lines entering the cube is equal to the number of field lines piercing out of the cube. As a result, net flux through the cube is zero. 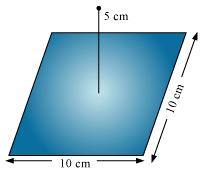 Answer :
The square can be considered as one face of a cube of edge 10 cm with a centre where charge q is placed. According to Gauss’s theorem for a cube, total electric flux is through all its six faces.

Hence, electric flux through one face of the cube i.e., through the square,

(b) Total electric flux (∅Total) leaving out the surface of a sphere containing net charge Q is given by the relation,
Where,

Q24 : Two large, thin metal plates are parallel and close to each other. On their inner faces, the plates have surface charge densities of opposite signs and of magnitude 17.0 x 10-22 C/m2. What is E: (a) in the outer region of the first plate, (b) in the outer region of the second plate, and (c) between the plates?
Answer :
The situation is represented in the following figure.

Charge density of plate A,

= – 17.0 × 10– 22 C/m2
In the regions, I and III, electric field E is zero. This is because charge is not enclosed by the respective plates.
Electric field E in region II is given by the relation,

Q26 : Which among the curves shown in Fig. 1.35 cannot possibly represent electrostatic field lines?
(a) 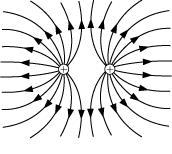 Answer :
(a) The field lines showed in (a) do not represent electrostatic field lines because field lines must be normal to the surface of the conductor.

Q27 : In a certain region of space, electric field is along the z-direction throughout. The magnitude of electric field is, however, not constant but increases uniformly along the positive z-direction, at the rate of 105 NC-1 per metre. What are the force and torque experienced by a system having a total dipole moment equal to 10-7 Cm in the negative z-direction?
Answer :
Dipole moment of the system, p = q × dl = – 10– 7 C m
Rate of increase of electric field per unit length,
dE/dl = 10+5 N C-1
Force (F) experienced by the system is given by the relation,
F = qE

Q28 : (a) A conductor A with a cavity as shown in Fig. 1.36(a) is given a charge Q. Show that the entire charge must appear on the outer surface of the conductor. (b) Another conductor B with charge q is inserted into the cavity keeping B insulated from A. Show that the total charge on the outside surface of A is Q + q [Fig. 1.36(b)]. (c) A sensitive instrument is to be shielded from the strong electrostatic fields in its environment. Suggest a possible way.

Answer :
(a) Let us consider a Gaussian surface that is lying wholly within a conductor and enclosing the cavity. The electric field intensity E inside the charged conductor is zero.
Let q is the charge inside the conductor and is the permittivity of free space.
According to Gauss’s law,
Flux,

Therefore, charge inside the conductor is zero.
The entire charge Q appears on the outer surface of the conductor.

(c) A sensitive instrument can be shielded from the strong electrostatic field in its environment by enclosing it fully inside a metallic surface. A closed metallic body acts as an electrostatic shield.

According to Gauss’s law,

Therefore, the electric field just outside the conductor is

Therefore, the field due to the rest of the conductor is

Consider a point A at a perpendicular distance l from the mid-point O of the wire, as shown in the following figure.

Let E be the electric field at point A due to the wire, XY.
Consider a small length element dx on the wire section with OZ = x
Let q be the charge on this piece.
∴ q = λdx
Electric field due to the piece,

On differentiating equation (2), we obtain

Q31 : It is now believed that protons and neutrons (which constitute nuclei of ordinary matter) are themselves built out of more elementary units called quarks. A proton and a neutron consist of three quarks each. Two types of quarks, the so called ‘up’ quark (denoted by u) of charge (+2/3) e, and the ‘down’ quark (denoted by d) of charge (-1/3) e, together with electrons build up ordinary matter. (Quarks of other types have also been found which give rise to different unusual varieties of matter.) Suggest a possible quark composition of a proton and neutron.
Answer :
A proton has three quarks. Let there be n up quarks in a proton, each having a charge of

.
Charge due to n up quarks

Total charge on a proton = + e

.
Charge on a neutron due to n up quarks

Number of down quarks is 3 – n,each having a charge of

Total charge on a neutron = 0

(b) Two charges of same magnitude and same sign are placed at a certain distance. The mid-point of the joining line of the charges is the null point. When a test charged is displaced along the line, it experiences a restoring force. If it is displaced normal to the joining line, then the net force takes it away from the null point. Hence, the charge is unstable because stability of equilibrium requires restoring force in all directions.

Q33 : A particle of mass m and charge ( – q) enters the region between the two charged plates initially moving along x-axis with speed vx (like particle 1 in Fig. 1.33). The length of plate is L and an uniform electric field E is maintained between the plates. Show that the vertical deflection of the particle at the far edge of the plate is qEL2/ (2mv2x).
Compare this motion with motion of a projectile in gravitational field discussed in Section 4.10 of Class XI Textbook of Physics.
Answer :
Charge on a particle of mass m = – q
Velocity of the particle = vx
Length of the plates =L
Magnitude of the uniform electric field between the plates = E
Mechanical force, F = Mass (m) × Acceleration (a)

Time taken by the particle to cross the field of length L is given by,

In the vertical direction, initial velocity, u = 0
According to the third equation of motion, vertical deflection s of the particle can be obtained as,

Hence, vertical deflection of the particle at the far edge of the plate is qEL2 / (2mv2x) .
This is similar to the motion of horizontal projectiles under gravity.

Therefore, the electron will strike the upper plate after travelling 1.6 cm.