Free NCERT Solutions for Class 12 Physics Chapter 6 Electromagnetic Induction solved by Expert Teachers as per NCERT (CBSE) Book guidelines and brought to you by Toppers Bulletin. These Electromagnetic Induction Exercise Questions with Solutions for Class 12 Physics covers all questions of Chapter Electromagnetic Induction 12 and help you to revise complete Syllabus and Score More marks as per CBSE Board guidelines from the latest NCERT book for class 12 Physics. You can read and download NCERT Book Solution to get a better understanding of all topics and concepts
6.1 – INTRODUCTION
6.2 – THE EXPERIMENTS OF FARADAY AND HENRY
6.3 – MAGNETIC FLUX
6.4 – FARADAY’S LAW OF INDUCTION
6.5 – LENZ’S LAW AND CONSERVATION OF ENERGY
6.6 – MOTIONAL ELECTROMOTIVE FORCE
6.7 – ENERGY CONSIDERATION: A QUANTITATIVE STUDY
6.8 – EDDY CURRENTS
6.9 – INDUCTANCE
6.9.1 – Mutual inductance
6.9.2 – Self-inductance
6.10 – AC GENERATOR.

Exercise : Solutions of Questions on Page Number : 229
Q1 :Predict the direction of induced current in the situations described by the following Figs. 6.18(a) to (f ).
(a)

Q2 :Use Lenz’s law to determine the direction of induced current in the situations described by Fig. 6.19:
(a) A wire of irregular shape turning into a circular shape;
(b) A circular loop being deformed into a narrow straight wire. 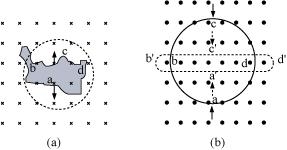 Where,
Φ = Induced flux through the small loop
= BA … (ii)
B = Magnetic field

Q5 :A 1.0 m long metallic rod is rotated with an angular frequency of 400 rad
s-1 about an axis normal to the rod passing through its one end. The other end of the rod is in contact with a circular metallic ring. A constant and uniform magnetic field of 0.5 T parallel to the axis exists everywhere. Calculate the emf developed between the centre and the ring.
Answer :
Length of the rod, l = 1 m
Angular frequency,ω = 400 rad/s
Magnetic field strength, B = 0.5 T
One end of the rod has zero linear velocity, while the other end has a linear velocity of lω.
Average linear velocity of the rod,

Emf developed between the centre and the ring,

Hence, the emf developed between the centre and the ring is 100 V.

The current induced in the coil produces a torque opposing the rotation of the coil. The rotor is an external agent. It must supply a torque to counter this torque in order to keep the coil rotating uniformly. Hence, dissipated power comes from the external rotor.

(b) Using Fleming’s right hand rule, it can be inferred that the direction of the induced emf is from West to East.
(c) The eastern end of the wire is at a higher potential.

Where is the change in the flux linkage with the coil.
Emf is related with mutual inductance as:

Hence, the change in the flux linkage is 30 Wb.

Q11 :Suppose the loop in Exercise 6.4 is stationary but the current feeding the electromagnet that produces the magnetic field is gradually reduced so that the field decreases from its initial value of 0.3 T at the rate of 0.02 T s-1. If the cut is joined and the loop has a resistance of 1.6 Ω how much power is dissipated by the loop as heat? What is the source of this power?
Answer :
Sides of the rectangular loop are 8 cm and 2 cm.
Hence, area of the rectangular wire loop,
A = length × width
= 8 × 2 = 16 cm2
= 16 × 10-4 m2
Initial value of the magnetic field, B’ = 0.3 T
Rate of decrease of the magnetic field, dB/dt = 0.02 T/s
Emf developed in the loop is given as:

Where,
dΦ= Change in flux through the loop area
= AB

Resistance of the loop, R = 1.6 ω
The current induced in the loop is given as:

Power dissipated in the loop in the form of heat is given as:

The source of this heat loss is an external agent, which is responsible for changing the magnetic field with time.

And, rate of decrease of the magnetic field,

Resistance of the loop,

Rate of change of the magnetic flux due to the motion of the loop in a non-uniform magnetic field is given as:

Rate of change of the flux due to explicit time variation in field B is given as:

Since the rate of change of the flux is the induced emf, the total induced emf in the loop can be calculated as:

Hence, the direction of the induced current is such that there is an increase in the flux through the loop along positive z-direction.

Q13 :It is desired to measure the magnitude of field between the poles of a powerful loud speaker magnet. A small flat search coil of area 2 cm2 with 25 closely wound turns, is positioned normal to the field direction, and then quickly snatched out of the field region. Equivalently, one can give it a quick 90° turn to bring its plane parallel to the field direction). The total charge flown in the coil (measured by a ballistic galvanometer connected to coil) is 7.5 mC. The combined resistance of the coil and the galvanometer is 0.50Ω. Estimate the field strength of magnet.
Answer :
Area of the small flat search coil, A = 2 cm2 = 2 × 10 -4 m2
Number of turns on the coil, N = 25
Total charge flowing in the coil, Q = 7.5 mC = 7.5 × 10 – 3 C
Total resistance of the coil and galvanometer, R = 0.50Ω
Induced current in the coil,

Induced emf is given as:

Hence, the field strength of the magnet is 0.75 T.

Q14 :Figure 6.20 shows a metal rod PQ resting on the smooth rails AB and positioned between the poles of a permanent magnet. The rails, the rod, and the magnetic field are in three mutual perpendicular directions. A galvanometer G connects the rails through a switch K. Length of the rod = 15 cm, B = 0.50 T, resistance of the closed loop containing the rod = 9.0 mΩ. Assume the field to be uniform.
(a) Suppose K is open and the rod is moved with a speed of 12 cm s-1 in the direction shown. Give the polarity and magnitude of the induced emf.

Hence, the average back emf induced in the solenoid is 6.5 V.

Q16 :(a) Obtain an expression for the mutual inductance between a long straight wire and a square loop of side a as shown in Fig. 6.21.
(b) Now assume that the straight wire carries a current of 50 A and the loop is moved to the right with a constant velocity, v = 10 m/s.
Calculate the induced emf in the loop at the instant when x = 0.2 m.
Take a = 0.1 m and assume that the loop has a large resistance.

Answer :
(a) Take a small element dy in the loop at a distance y from the long straight wire (as shown in the given figure).

Q17 :A line charge λ per unit length is lodged uniformly onto the rim of a wheel of mass M and radius R. The wheel has light non-conducting spokes and is free to rotate without friction about its axis (Fig. 6.22). A uniform magnetic field extends over a circular region within the rim. It is given by,
B = – B0 k (r ≤ a < R)
= 0 (otherwise)
What is the angular velocity of the wheel after the field is suddenly switched off?

At distance r,themagnetic force is balanced by the centripetal force i.e.,