Free NCERT Solutions for Class 12 Physics Chapter 10 Wave Optics solved by Expert Teachers as per NCERT (CBSE) Book guidelines and brought to you by Toppers Bulletin. These Wave Optics Exercise Questions with Solutions for Class 12 Physics covers all questions of Chapter Wave Optics 12 and help you to revise complete Syllabus and Score More marks as per CBSE Board guidelines from the latest NCERT book for class 12 Physics. You can read and download NCERT Book Solution to get a better understanding of all topics and concepts
10.1 – INTRODUCTION
10.2 – HUYGENS PRINCIPLE
10.3 – REFRACTION AND REFLECTION OF PLANE WAVES USING HUYGENS PRINCIPLE
10.3.1 – Refraction of a plane wave
10.3.2 – Refraction at a rarer medium
10.3.3 – Reflection of a plane wave by a plane surface
10.3.4 – The doppler effect
10.4 – COHERENT AND INCOHERENT ADDITION OF WAVES
10.5 – INTERFERENCE OF LIGHT WAVES AND YOUNG’S PERIMENT
10.6 – DIFFRACTION

Exercise : Solutions of Questions on Page Number : 383
Q1 :Monochromatic light of wavelength 589 nm is incident from air on a water surface. What are the wavelength, frequency and speed of (a) reflected, and (b) refracted light? Refractive index of water is 1.33.
Answer :
Wavelength of incident monochromatic light,
λ = 589 nm = 589 × 10-9 m
Speed of light in air, c = 3 × 108 m/s
Refractive index of water, μ = 1.33
(a) The ray will reflect back in the same medium as that of incident ray. Hence, the wavelength, speed, and frequency of the reflected ray will be the same as that of the incident ray.
Frequency of light is given by the relation,
v = c/λ

Wavelength of light in water is given by the relation,

(b) The shape of the wavefront in case of a light emerging out of a convex lens when a point source is placed at its focus is a parallel grid. This is shown in the given figure. 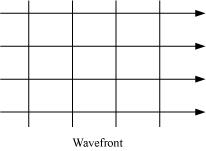 (c) The portion of the wavefront of light from a distant star intercepted by the Earth is a plane.

Hence, the wavelength of the light is 600 nm.

Where,
Φ= Phase difference between the two waves
For monochromatic light waves,
I1 = I2

Hence, the intensity of light at a point where the path difference is λ/3 is  K/4 units.

Hence, the least distance from the central maximum can be obtained by the relation:

Note: The value of d and D are not given in the question.

Therefore, the angular width of the fringe in water will reduce to 0.15°.

Therefore, the Brewster angle for air to glass transition is 56.31°.

Therefore, the angle of incidence for the given condition is 45°.

Therefore, the distance for which the ray optics is a good approximation is 40 m.

Speed of light, c = 3 X 108 m/s
Let the velocity of the star receding away from the Earth be v.
The red shift is related with velocity as:

Q12 :Explain how Corpuscular theory predicts the speed of light in a medium, say, water, to be greater than the speed of light in vacuum. Is the prediction confirmed by experimental determination of the speed of light in water? If not, which alternative picture of light is consistent with experiment?
Answer :
No; Wave theory
Newton’s corpuscular theory of light states that when light corpuscles strike the interface of two media from a rarer (air) to a denser (water) medium, the particles experience forces of attraction normal to the surface. Hence, the normal component of velocity increases while the component along the surface remains unchanged.
Hence, we can write the expression:
c sin i =v sin r …………….… (i)
Where,
i = Angle of incidence
r = Angle of reflection
c = Velocity of light in air
v = Velocity of light in water
We have the relation for relative refractive index of water with respect to air as:
μ = v/c
Hence, equation (i) reduces to

Q13 :You have learnt in the text how Huygens’ principle leads to the laws of reflection and refraction. Use the same principle to deduce directly that a point object placed in front of a plane mirror produces a virtual image whose distance from the mirror is equal to the object distance from the mirror.
Answer :
Let an object at O be placed in front of a plane mirror MO’ at a distance r (as shown in the given figure). 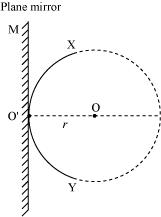 A circle is drawn from the centre (O) such that it just touches the plane mirror at point O’. According to Huygens’ Principle, XY is the wavefront of incident light.
If the mirror is absent, then a similar wavefront X’Y’ (as XY) would form behind O’ at distance r (as shown in the given figure).

Angular width of a fringe is related to slit spacing (d) as:
θ = λ /d

Where,
λ = Wavelength of radio waves

Therefore, the wavelength of the radio waves is 12.5 cm.

Therefore, the width of the slits is 0.2 mm.

Q21 :In deriving the single slit diffraction pattern, it was stated that the intensity is zero at angles of nλ/a. Justify this by suitably dividing the slit to bring out the cancellation.
Answer :
Consider that a single slit of width d is divided into n smaller slits.
Width of each slit, d’ = d/n
Angle of diffraction is given by the relation,