(a) Circular shadow with cylinder 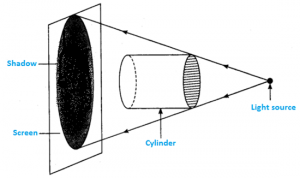 (b) Rectangular shadow with cylinder 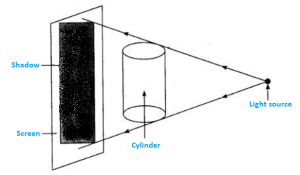 Q2. What is umbra?
Ans: The dark shadow region which falls behind the object where no light enters is called Umbra.

Q5. What is a shadow?
Ans: Shadow is the dark area behind any opaque object where the light cannot pass through.

Q6. What is penumbra?
Ans: The partially shaded region which is less darker than the umbra, behind any opaque object is known as Penumbra.

Q3. What is an incandescent body? Give example.
Ans: The bodies which emit light when a very high temperature heat is applied to them are called incandescent bodies. Example: hot filament in an electric bulb.

Q4. What causes a shadow to form?
Ans: When light cannot pass through an opaque object, a dark region is formed behind the object called a shadow.

Q5. Draw a diagram to illustrate the formation of umbra and penumbra 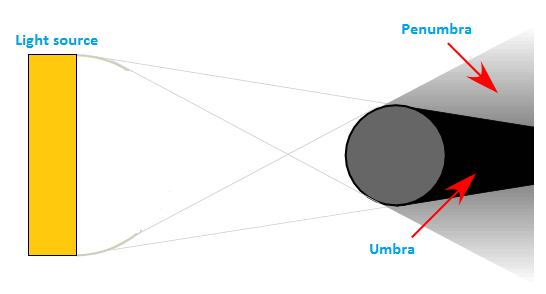 Q6. What are the essential conditions for the formation of shadow?
Ans: (1) The object should be opaque where light cannot pass through.

Q8. Write the differences between a shadow and an image.
Ans: ImageShadow
(1) It is formed by reflected raysIt is formed when no light is allowed to pass through the object,
(2) Images can be seen when reflected light approaches observer’s eyeNo light approaches observer’s eye
(3) Image provides a lot of information like colour, shape, etc.Shadows are vague and don’t provide any information
(4) Image can be straight or invertedShadow is not inverted
(5) Size is same as that of the objectSize can be smaller or larger

Q14. A and B are facing the mirror and standing in such a way that A can see B and B can see A. Explain this phenomenon. 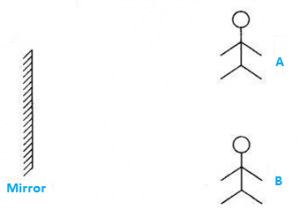 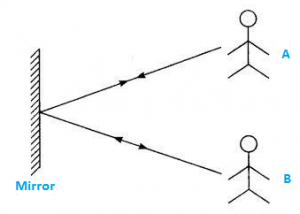 Q17. If you have ever seen an ambulance, the word ‘AMBULANCE’ is written in the form of mirror image in vehicles. Why is it so?

Ans: The mirror image of AMBULANACE is . It is written in mirror image so that the driver in the vehicle going in front of the ambulance could read it correctly from his rear view mirror and he would make way for the ambulance to reach the hospital or patient as soon as possible.

(b)The shadow will be big in size when the pencil is taken away from the wall and closer to the candle.

(c)To get the same sized shadow as the pencil is, move the pencil to bring it at an equal distance between the wall and the candle.

Ans: When light rays hit a highly polished smooth surface like a mirror, it bounces back to the same medium like a ball thrown against a wall. It is called reflection of light. 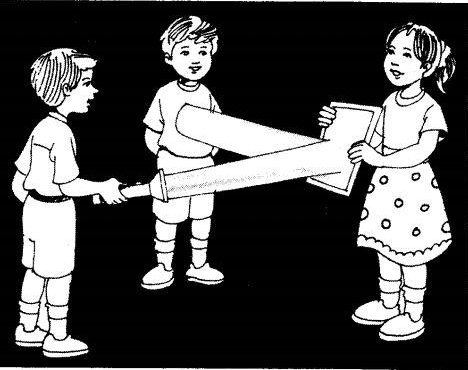 Q2. Explain the manner in which light travels with the help of an activity.

Ans: Take a comb and fix it on one side of a wooden block. Fix a mirror on the other side as shown in the figure. Spread a dark coloured sheet of paper between the mirror and the comb. Send a beam of light from a torch through the comb. You get a pattern of light similar to that shown in the figure. This activity explains the manner in which light travels and gets reflected from a mirror. 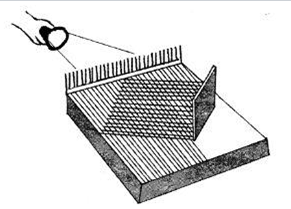 Q3. Explain that light has the property of rectilinear propagation with an activity.

Ans: Take three pieces of cardboard. Stack the 3 pieces of cardboard and make a hole in the middle of each cardboard by using a thick nail. Erect these cards up on the table at a short distance away from each other. Take a candle which is of the same height as the holes in the cards. Light the candle and place it in front of the cards. We see that the light of the candle is visible only when the holes on cards lie in a straight line. If we disturb them the light from the candle disappears. This experiment proves that light propagates in a straight line.