(b) Stones are picked out by hand from wheat, rice etc.

Q2. What is a winnowing? Where is it used?
Answer:  Winnowing is used to separates heavier and lighter components of a mixture by wind or by blowing air. This process is done by the farmers to separate lighter husk particles from heavier seeds of grain. 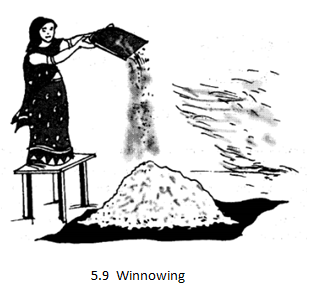 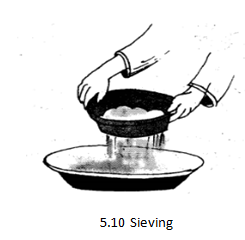 Q6. Is it possible to separate sugar mixed with wheat flour? If yes, how will you do it?
Answer: Sugar can be separated from wheat flour by sieving. Due to difference in the size of particles, sugar will stay on sieve and wheat flour will pass through it.

8. Fill in the blanks:
(a) The method of separating seeds of paddy from its stalks is called .
(b) When milk, cooled after boiling, is poured onto a piece of cloth, the cream is left behind on it. This process of separating cream from milk is an example of _______.
(a) Salt is obtained from sea water by the process of __________.
(b) Impurities settled at the bottom when muddy water was kept overnight in a bucket. The clear water was then poured off from the top. The process of separation used in this example is called ________.
Answer:
(a) threshing   (b) filtration   (c) evaporation
(d) sedimentation and decantation

(d) False and the answer is here

grain and husk can be separated with the process of winnowing

Q10. Lemonade is prepared by mixing lemon juice and sugar in water. You wish to add ice to cool it. Should you add ice to the lemonade before or after dissolving sugar ? In which case would it be possible to dissolve more sugar ?
Answer:  We should add ice after dissolving sugar. When the temperature is high, then more sugar can be dissolved. After mixing ice, it gets cold and lesser sugar will dissolve in it.

Q1. What is a strainer?
Answer: Strainer is a kind of sieve which is used to separate a liquid from solid.

Q3. How will you separate mangoes from a mixture of mangoes and apples?

Q7. What types of material can we separate by using handpicking?
Answer:  The materials having different size and colour can be separated by handpicking.

Q9. Name the process used to separate heavier and lighter components of a mixture.
Answer:  Winnowing.

Q10. Can the above stated method be used if both the components have same weight?
Answer: No, this method cannot be used.

Q11. What is evaporation?
Answer:  The process of conversion of water into vapour is called evaporation.

Q12. Name the method by which we get salt from ocean water.

Q14. Write the opposite process of evaporation.
Answer:  Condensation.

Q1.What is mixture?
Answer:  When two or more than two substances are mixed together in any ratio, then it is called a mixture.

Q3. Define the term handpicking.
Answer: The process used to separate slightly larger particles from a mixture by hand is called handpicking.
For example:  Stone pieces can be separated from wheat or rice by handpicking.

Q4. What do you mean by threshing? Where is it used?
Answer:  Threshing is a process in which we separate grain from stalks. This process is used by farmer to separate gram, wheat, rice, mustard seeds in his field.

Q6. How will you separate oil and water from their mixture?
Answer:  Oil, being lighter than water, will float on it. Two distinct layers are formed and slowly oil is allowed to flow into another container and is separated from water. Separating funnel can also be used to separate the two.

Q7. What is evaporation?
Answer:   The process of conversion of water into vapour is called evaporation. This process takes place continuously where water is present. Common salt from sea water is obtained using this method.

Q8. Define winnowing.
Answer: The process is used to separate components from a mixture in which one component is heavier or lighter than other is called winnowing. Winnowing is done with the help of wind or by blowing air.

Q9. What do you mean by sieving? Give an example.
Answer:  Sieving allows the fine flour particles to pass through the holes of the sieve while the bigger particles or impurities remain on the sieve. For example, in a flour mill, impurities like husk and stones are removed from wheat before grinding it.

Q1. What is threshing?

Answer:  Threshing is a process that is used to separate grain from stalks. In this process, the stalks are beaten to free the grain seeds. Sometimes threshing is done with the help of bullocks. Machines are also used to thresh large quantities of grain. 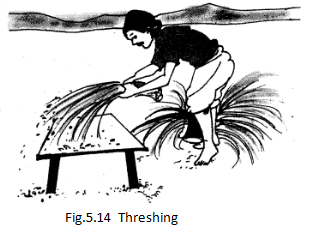 Q2. Describe the method to obtain salt from sea water.
Answer: Sea water contains many salts mixed in it. One of them is common salt, when sea water is allowed to stand in shallow pits, water gets evaporated by sunlight and slowly turns into water vapour. In a few days, the water evaporates completely leaving behind the solid salts. Common salt is then obtained from this mixture of salts by further purification.

Q3. What is decantation?

Q4. Where is decantation used? Give two examples.
Answer:
(i) Decantation is used to separate insoluble solids or liquid from liquid. Rain water is a mixture of mud and water. It is purified by decantation.
(ii) Oil and water also get separated by this method because oil floats up.

Q5. How will you prepare cheese (paneer)?
Answer: For making paneer, a few drops of lemon juice sire added to milk as it boils. This gives a mixture of particles of solid paneer and liquid. The paneer is then separated by filtering the mixture through a fine cloth or strainer.

Q6. Explain the method that can be used for separating the following mixture:

(i) Sand and husk
(ii) Wheat, sugar and stalk
(iii) Water and petrol
(iv) Rice and salt
(v) Sand and salt
Answer:
(i) Mixture of sand and husk: Sand and husk can be separated by the method of winnowing.

(ii) Mixture of wheat, sugar and stalk: For separating stalk from the mixture we should follow the winnowing method because stalk is lighter than the other two components and get separated. Wheat and sugar can be separated by sieving because they are in different sizes.

(iii) Mixture of water and petrol: Water does not dissolve in petrol. So, it can be separated by the use of a separating funnel.

(iv) Mixture of rice and salt: Rice and salt can be separated by sieving.

(v) Mixture of sand and salt: Sand and salt is mixed with water. Salt dissolves in water and sand can be separated by sedimentation and decantation followed by filtration. After that, using evaporation, common salt is separated.