Q1:Mention the composition of air.
Ans: Air is a mixture of oxygen, nitrogen, water vapor, carbon dioxide, and also a few other gasses. Air also constitutes some dust particles.

Q2:Which gas in the atmosphere is very essential for respiration in animals?
Ans: Oxygen.

Q3:Does air support burning? If yes. How can you show that by an experiment? 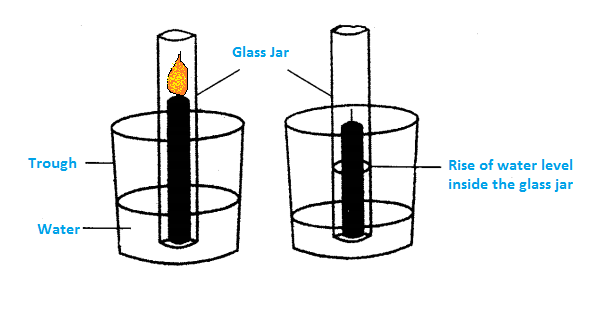 Q4:Describe an experiment, which shows that air dissolved in water.
Ans. Fill a glass vessel or a beaker. Place the beaker on the tripod over the burner. Let the water in the beaker heat slowly. Now look at the inner surface of the vessel before the water starts boiling, you will be able to see tiny bubbles on the inside. This happens because, on heating water, the air dissolved in the water escapes in the form of bubbles.

Q5:When a lump of cotton wool is dipped in water, why does it shrink?

Ans: Lump of cotton wool when dipped in water shrinks because of the presence of air between the gaps of cotton fibers. When it is dipped, the water replaces the air from those gaps, making the cotton lump heavy and it finally shrinks as the air gaps are removed.

Q6:What do we call the layer of air surrounding the earth?
Ans: Atmosphere

Q7:What is the component of air, which is used by the green plants to make their food?
Ans: Carbon dioxide.

Q9:Explain how plants and animals help each other out in exchange of gasses in our atmosphere.
Ans: Both animals and plants use oxygen present in the air during respiration, and breath out or release carbon dioxide gas back into the air. But in the case of green plants, they also release oxygen gas by absorbing carbon dioxide during the process of photosynthesis. So, we can say that animals and plants help each other in exchange of gasses in our atmosphere.

Q1:What is the main component of air?
Ans: Nitrogen gas

Q5:What is the main source of carbon dioxide in the air?
Ans: Respiration by animals and plants is the natural source and the burning of fuel is manmade.

Q6:Mention the most important condition for combustion to occur.
Ans: Presence of air.

Q1:Why is the air considered as a mixture?
Ans: Air constitutes of various gasses like oxygen, nitrogen, carbon dioxide, and dust particles. All these grasses retain their physical and chemical properties in the air. Therefore, the air is called a mixture.

Q2:What is the major gas present in the (a) inhaled air (b) exhaled air?
Ans. (a) Oxygen (b) Carbon dioxide.

Q4:What is the device, which uses the wind energy for producing electricity?

Ans: Windmills are devices that use wind energy and convert it into electrical energy

Q5:Define the term wind energy also mention any two advantages of wind energy.
Ans; Moving air is called the wind. It possesses a high amount of kinetic energy. The kinetic energy possessed by the wind is known as wind energy. Advantages of Wind Energy are:
(i)It can be used to pump the groundwater to the surface.
(ii)It can also be used to generate electricity with the help of windmills.

Q6:Mention any two uses of air.

Ans. (i) All living organisms need air for respiration.
(ii) Air is essential for burning any substance.

Q7:Explain the balance of oxygen in the air.
Ans: All living organisms in our ecosystem i.e. Water, soil, or on earth require oxygen present in the air for respiration. During the process of respiration, oxygen is inhaled and carbon dioxide gas is released into the air. But in the case of green plants, during the process of photosynthesis, use carbon dioxide present in air for preparing food and they release oxygen gas into the air. Thus the balance of oxygen is well maintained in the air or atmosphere.

Q8:What would happen if the percentage of oxygen in our atmosphere is raised to 70%?
Ans: If in any case, a substance catches fire it will be very difficult or hard to extinguish or put off the fire, as oxygen supports combustion.

Q9:What would happen if the percentage of carbon dioxide increases in the air?

Ans: If the carbon-dioxide percentage increases it will cause a greenhouse effect, i.e. the carbon dioxide present in our atmosphere will not allow the hot rays of sun to escape back into space from the atmosphere after reflection.

Once they enter the earth’s atmosphere, they increase the overall temperature of the earth, which will also cause the ice on mountains to melt, and subsequently water level will rise.

Q10:You must have observed that during the rainy season, when it rains, animals and worms like snakes, earthworm, snails etc. are commonly seen. Why?
Ans: Animals and worms like snakes, earthworms, snails live in burrows or remain buried in the soil. They get oxygen from the air that enters into the burrow but when it rains those air gaps in the burrows are replaced by water. In order to breathe or continue the respiration process they come out to the upper surface of the ground in search of air.

Ans: Carbon dioxide gas is used in fire extinguishers because it does not support combustion or burning/ flame. When it is sprayed on burning objects or substances, it temporarily stops the supply of oxygen for the flame and thereby extinguishing the fire.

Q12:Explain any experiment or process to prove that soil contains air in it.
Ans: Take a glass tumbler and fill it with soil in it, then pour water on the soil slowly, now we can observe the air bubbles coming out of the soil. By this method, we can prove that soil holds air in it. 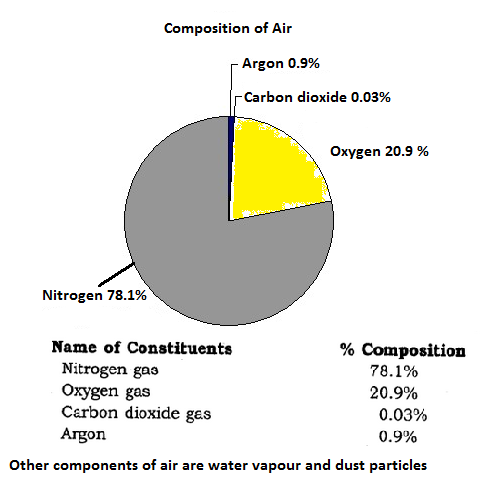 Q2:Air simply contains nitrogen and oxygen in 4:1 ratio of volumes. How to prove it through an experiment?

Ans: AIM: To show that air contains nitrogen and oxygen in a volume ratio of 4:1 Procedure: Take a candle and fix it at the center of a glass container. Then add some quantity of water in the glass container. Now place an empty glass jar over it as shown in the diagram (Imp: Glass jar must be dry). Above the water surface, mark five lines at an equal distance as shown in the diagram below. 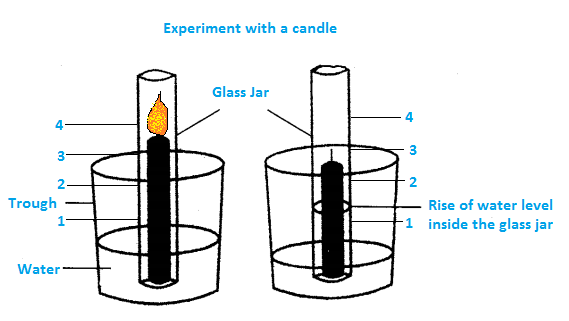 Now, carefully light the candle and cover the glass jar. Wait for a few seconds and now the flame will be extinguished due to the absence of oxygen to burn. Now we can observe that the water level raised in the glass jar is 1/5 of the volume of air present in the glass jar.

The above experiment proves that one part of the air present in the glass jar supports the combustion process, i.e., oxygen. Hence, 1/5th of the volume of air is oxygen. Thus, we can concur that air contains nitrogen and oxygen in the ratio 4:1. 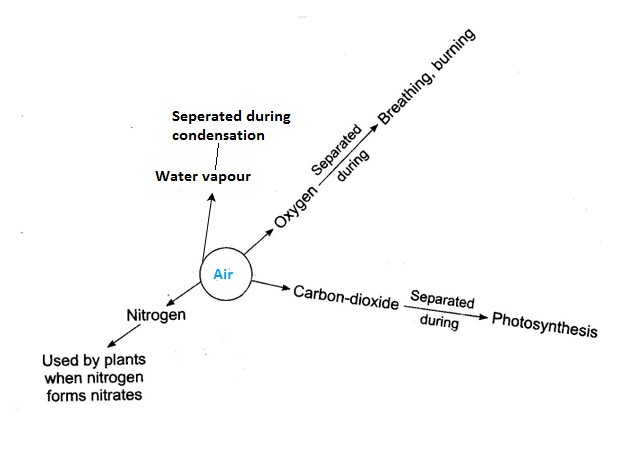