Q2:Determine whether the following phenomena is caused due to evaporation or condensation:
(a) Water drops are formed on the outer surface of the bottle or any container containing cold water.
(b) Formation of steam from wet clothes while they are ironed.
(c) Appearance of fog on a cold winter morning.
(d) Wiping of blackboard dries it up.
(e) Steam rising from a hot girdle when water is sprinkled on it.
Ans. (a) Condensation (b) Evaporation (c) Condensation (d) Evaporation (e) Evaporation

Q3: State True or False for the following statements:
(a) Only during the monsoon season, the water vapor is present in the air
(b) Water vaporizes into steam only from oceans, lakes, and rivers but not from the soil.
(c) The process of converting water into its vapor is called evaporation.
(d) The process of evaporation takes place only in sunlight.
(e) The water vapor condenses to form tiny droplets of water in the upper layers of air where it is cooler.

Q5:Take out a cooled bottle of water from refrigerator and place it on a table. After some time, you will notice a puddle of water around the bottle on the table. Why?
Ans: Since the water bottle is at a very low temperature the surface exposed is also very cold. As the cool surface is exposed, condensation of water vapor present in the air occurs. Now the condensed water molecules spread around the bottle. So a puddle of water is noticed after some time.

Q6:To clean our spectacles, we often breathe out hot air on glasses to make them dry, when the glasses become wet. Explain.
Ans: The air we blow out contains water vapour. The water vapour condenses on the spectacles forming moisture and the glass is coated with a layer of minute water droplets. With the addition of small amount of water, we can easy to clean the spectacles.

Q7:When does a drought occur?
Ans: When there is no rain for many years over a long period of time then there will arise a scarcity of water in that locality or region. This leads to drought. 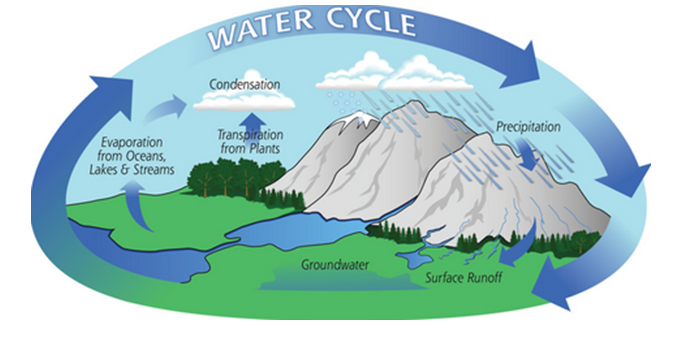 Q4:How does heavy rain affect us?

Ans: Heavy rains may cause:
(i) Rise of water level in reservoirs, rivers, pond, lakes, etc.
(ii) Waterlogging in household areas and floods.
(iii) Floods cause drastic damage to crops, property and animals.

Q5:How does the failure of rainfall affect people on the earth?
Ans: The failure of rainfall can cause the following:
(i)The soil in that region becomes dry and may lead to drought.
(ii) Water level in rivers, lakes, dams, etc. may fall below the minimum level, ponds and canals may even dry up. Which results in people of that region may not have access to water for even basic needs.
(iii) The ground water level will also fall.

Q6:Name two processes which are responsible for the formation of clouds.
Ans: Evaporation and transpiration. 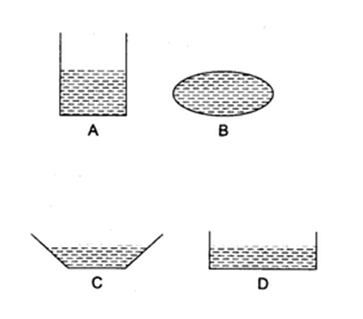 Ans. (a) C — More the exposed surface area, more will be the rate of evaporation.

(b) B — Since it is closed, evaporation does not take place.

Q8:Why do we see more fog in areas where there are a lot of trees during winter season?
Ans: Due to the presence of a lot of trees, air at that region will have more water vapor than compared to cities or other regions. These water vapors tend to condense on smoke or dust particles which lead to the formation of thick fog.

Q1:Explain the term conservation of water? Propose any three approaches to conserve water.

Ans: Avoiding wastage of water by discreet and economical use is called conservation of water. Proposals for conserving water:
Use only required or limited quantity of water
Plant as many trees as possible as trees and forests plays a major role in the formation of clouds and rainfall.
Rainwater Harvesting: Collecting the rainwater from rooftops and harvest them in tanks, ponds, lakes.

Rooftop rainwater harvesting. In this structure, the rainwater from the rooftop is collected into a storage tank, employing pipes to collect and transfer.
Another method, a huge pit is dug at close proximity to the house for collecting the rainwater. This pit is stuffed with different layers of coarse gravels, bricks, and granite or sand pieces.