2) Indicate ‘true’ and false’ among the following sentences:
(a)The movement and locomotion of all animals arethe same.
b)The cartilages are harder than bones.
(c)The finger bones do not have joints.
(d)The forearm has two bones.
(e)Cockroaches have an outer skeleton.
Solution:  (a)  False     (b) False    (c) False    (d) True   (e) True

3) Match the items in column I with one or more items of column II:

1) What do you mean by movement?
Answer: The changing position of the body or any part of the body is called movement.

2) At which part does the arm rotate?
Answer: The arm rotates on the round pit-like structure.

3) If you tie a scale with your arm, will you able to bend your elbow?
Answer: No, we cannot bend our elbow.

4) Name the places where two parts of the body are seen to be joined together.
Answer: These places are called joint.

5) If there are no joints, will it be possible to move?
Answer: No, it is not possible.

6) Can bones be bent?
Answer: No, bones cannot be bent.

10) What do you mean by acavity in bone?
Answer: The hollow space in the bone is called cavity.

11) Give two examples of ball and socket joint.
Answer : (i) Joint of upper arm and shoulder.
(ii) Joint of thethigh and the hip.

12) Give an example of a pivotal joint.
Answer: The joint of skull with backbone.

14) Give an example of a fixed joint.
Answer: Joints in the craniumof the skull.

15) Give an example of a gliding joint.
Answer: The joint in thebackbone.

16) What is askeleton?
Answer: The framework of bones in our body is called skeleton.

17) What are ribs?
Answer:  The bones of the chest are called ribs.

18) What is rib cage?
Answer: Ribs are joined with thebackbone to form a box. This box is called rib cage.

20) What are pelvic bones?
Answer: The bones, which enclose the body part below the stomach,are called pelvic bones.

21) What are cartilages?
Answer:  Some additional parts of the skeleton, which are not as hard as bones and are elastic in nature and can be bent,are called cartilages, e.g. cartilage of ear.

22) Name the three components of theskeleton.
Answer:  Skeleton is made up of many bones, joints and cartilage.

25) Give an example of ananimal, which can walk, climb and fly in the air.
Answer: Cockroaches.

27) Which part of the cockroach helps in flying?
Answer: There are two pairs of wings attached to the breast which helps them in flying.

29) What do you mean by streamlined?
Answer:  If the body tapers at both the ends then such a body shape is said to be streamlined.

30) How does the snake move?
Answer:  Snakes have a long backbone and many thin muscles, which help in the movement. The snake’s body curves into many loops. Each loop of the snake gives it a forward push by pressing against the ground.

32) Why are fractured bones plastered?
Answer: Plaster keeps broken bones at their right place so that they grow and join properly.

36) Many people suffer from a problem called arthritis. Explain its connection with movement.
Answer:  Arthritis is the pain in joints. With this problem, people find difficulty in moving from one place to another.

37) How is a bird’s body adapted for flying?
Answer: The following adaptations are seen in the body of birds.
(i)Bones are hollow.
(ii)Forelimbs are modified into wings.
(iii) The body is streamlined.

1) What are joints? Write the names of various types of joints.

Answer: The places where two parts of the body are joined together are called joints. There are following types of joints:
(i)Ball and socket joints
(ii) Pivotal joints
(iii) Hinge joints
(iv)Fixed joints
(v) Gliding joints

2) What is a skeleton? Draw a diagram to show the human skeleton.
Answer:  The bones in our body form a framework to give a shape to the body. The framework is called skeleton. 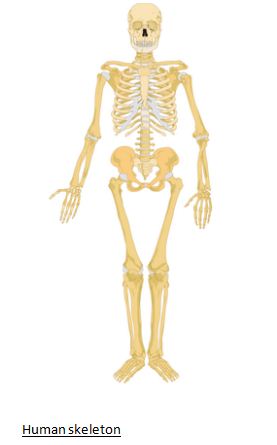 3) Write two ways by which we may know the shape of a human skeleton.
Answer:

(i)We can know the shape of the skeleton by feeling.

4) Write the differences between bones and cartilage.
Answer: 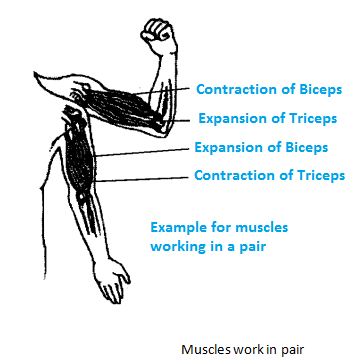 6) How does the earthworm move?
Answer:  Earthworm does not have bones. It has muscles. During the movement, earthworm first extends front part of the body keeping the rear portion fixed to the ground. Then it fixes the front and releases the rear end. It then shortens the body and pulls the rear end forward. In this way, by repeating such muscular expansions and contractions earthworm moves. 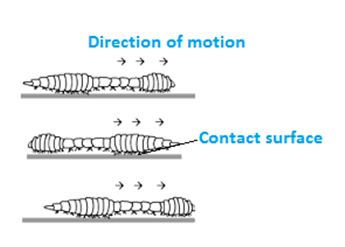 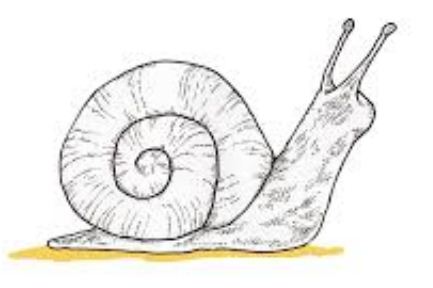 8) How do fish move in water?
Answer: The body of the fish is streamlined. The streamlined shape helps the fish to move in water. The skeleton of the fish is covered with muscles which make the front part of the body to curve to one side and the tail part swings towards the opposite side. This makes a jerk and pushes the body forward. In this way, it moves in the water. 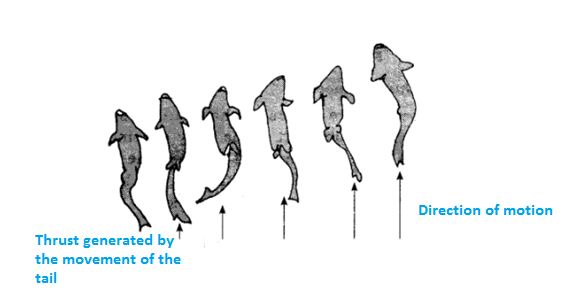 1) Explain various kinds of joints found in our body and give an example of each.
Answer:  There are five types of joints in our body:
(i)Fixed joints: Those joints which do not allow movement are called fixed joints. 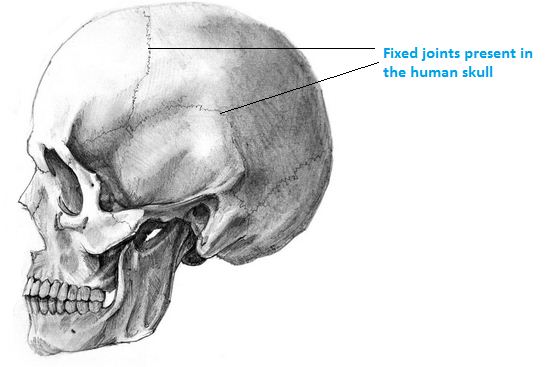 (ii)Ball and socket joint: This joint allows movement in all directions. The rounded end of one bone fits into the hollow space of other bone. For example, thejoint between upper arm and shoulder. 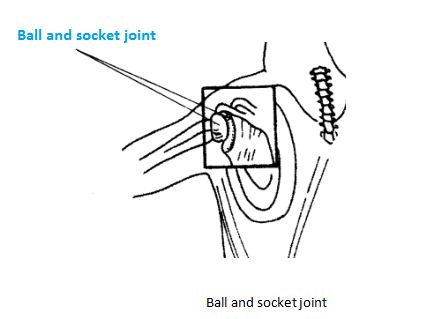 (iii) Pivotal joint: This type of joint allow movement in all planes, i.e. up and down, side and other planes. For example, head.

(iv)Hinge joint: The joint which allows movement only in one plane is called hinge joint. For example, fingers, knee 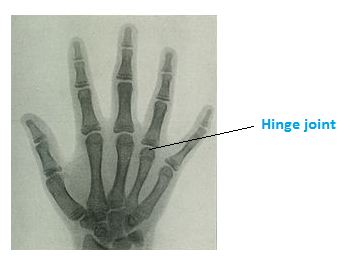