We provide here all types of questions like the short note on the solar system for class 6.

Q1. Answer the following questions briefly.
(a) How does a planet differ from a star?
(b) What is meant by the ‘Solar System’?
(c) Name all the planets according to their distance from the sun.
(d) Why is the Earth called a unique planet?
(e) Why do we see only one side of the moon always?
(f) What is the Universe?
Answer: (a)Differences between a planet and a star:

(b) The term Solar System refers to the “family” of the Sun. The Sun is a star around which eight planets, among other celestial objects, revolve in orbits. This whole system of bodies is called the Solar System. The Sun is the “head” of this system.

(c) The list of planets in the order of their distance from the Sun is as follows:
(i) Mercury ‘ (ii) Venus (iii) Earth (iv) Mars (v) Jupiter (vi) Saturn (vii) Uranus (viii) Neptune

(d) Why is the earth called a unique planet class 6? The Earth is regarded as a unique planet because of the following reasons:
(i) It is the only planet known to support life. It has oxygen and water present in proportions that allow life to thrive.
(ii) It also has a temperature range that supports life.
(iii) The proportion of water present is about two-thirds of the surface of earth when compared to land.

(f) The Universe is the largest unit in which we live. It is a collection of galaxies. There is only one Universe, and everything that exists, exists in this Universe itself.

(a) stars, constellation
(b) A huge system of stars is called a galaxy.
(c) The moon
(d) The earth
(e) Planets do not have their own heat and light.

State whether these sentences are true (T) or false (F).
(i) The Sun appears bigger and brighter than the other stars because it is indeed so.
(ii) Saptarishi and Ursa Major are two different constellations.
(iii) The Pole Star is known to have a fixed position in the sky.
(iv) The earth is the only planet that has a natural satellite.
(v) Pluto was declared a “dwarf planet” in August 2006.
(vi) The earth is the third-largest planet in the solar system.
(vii) The geoid shape is not perfectly spherical.
(viii) The moon takes about the same time in rotating about its axis once as it does to complete a revolution around the earth.
Answer:
(i) False, (ii) False, (iii) True, (iv) False, (v) True, (vi) False, (vii) True, (viii) True.

Q5. What is the shape of the orbits in which planets revolve around the sun?
Answer: The orbits of planets are elliptical (Le. elongated) in shape.

Q6. Which planet is called “Earth’s twin” and why?

Answer: Venus is called “Earth’s twin” because it is similar to Earth in its shape and size.

Q7. What is “Geoid”?
Answer: A sphere with its ends flattened at poles (just like earth) is called geoid.

Q8. Why is earth called “blue planet”? [V. Imp.]
Answer: Earth appears blue from when seen from the outer space, since it has over 2/3rd water. So it is called blue planet.

Q9. How much time does the moon take to revolve once around the earth?

Answer: The moon takes approximately 27 days to revolve once around the earth.

Q10. What is the difference between the moon and INSAT? [V. Imp.]
Answer: The moon is a natural satellite of the earth while INSAT is an artificial satellite.

Q11. What are asteroids?
Answer: Asteroids are the numerous tiny celestial bodies which revolve around the sun and are mainly found between the orbits of Mars and Jupiter.

Q12. What is a meteoroid?
Answer: Small pieces of rocks which move around the sun are called meteoroids.

Q2. What is the Pole Star? How can the Saptarishi be used to locate it? [Imp.]
Answer: The Pole Star is the star that is known to retain its position in the sky always. We can locate the position of the Pole Star with the help of the constellation Saptarishi. If an imaginary line is drawn joining the “pointer stars” of the Saptarishi and extended further, it will point to the Pole Star. 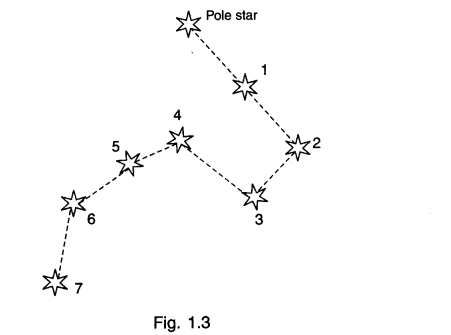 In the Fig. 1.3 shown here, 1 and 2 represent the “pointer stars”. The Pole Star and the pointer stars lie on the same line.

Q 4. How does earth support life? [V. Imp.]
Answer: The earth has conditions that support life. It is neither too hot nor too cold. It has both water and air, which are both indispensable for life. Presence of oxygen in the air in appropriate proportion supports life. These factors make earth a unique planet.

Q1. Write short notes on the following:
(a) The sun
(b) The moon
(c) Galaxy. [V. Imp.]
Answer: (a) The sun is considered the “head” of the solar system. It is a star, although it is smaller and less bright than most other stars. The sun is a huge celestial body made up of extremely hot gases. It provides heat and light for the whole of the solar system. Life on earth depends on many factors, and the sunlight is one of them. The sun is about 150 million kilometers away from earth.

(b) The moon is the only natural satellite of our planet earth. Its diameter is just about a quarter of the earth’s diameter. It is comparatively closer (3,84,400 kilometers away) to earth than all other celestial bodies. It does not support life. The moon revolves around the earth and rotates about its own axis in about the same time, due to which only one side of the moon is visible to us.

(c) Galaxy is a term that refers to billions of stars, clouds of dust and gases, and other celestial bodies considered as a single unit. The only bigger unit is the universe, galaxies make up the universe. The galaxy we live in is called the Milky Way.

Q2. Draw a diagram showing the eight planets of the solar system in their orbits around the’ sun. Also prepare a table mentioning the length of their days and years.
Answer: 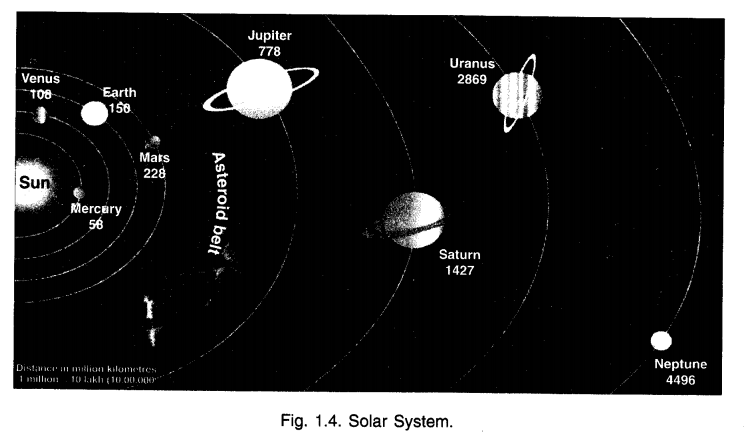