Q2. Complete the following sentences:
(a)Officials collected…….. from the area under the direct control of the ruler.
(b)Royal princes often went to the provinces as………….
(c)The Mauryan rulers tried to control…….. and……….. which were important for transport.
(d)People in forested regions provided the Mauryan officials with…………
Ans: (a)taxes (b) governors
(c) roads, rivers (d) elephants, timber, honey and wax.

Q3. State whether true or false:
(a)UJjain was the gateway to the north-west.
(b)Chandragupta’s ideas were written down in the Arthashastra.
(c)Kalinga was the ancient name of Bengal
(d)Most Ashokan inscriptions are in the Brahmi script.
Ans: (a) False, (b) True, (c) False, (d) True.

Q4. What were the problems that Ashoka wanted to solve by introducing ‘dhamma’?
Ans: There were a number of problems in the empire that led Ashoka to introduce his ‘dhamma’. People in the empire followed different religious, usually causing conflicts. Animal sacrifice was common. Slaves and servants were ill-treated by their masters. There were quarrels among civilians. To solve these problems, Ashoka introduced his ‘dhamma’.

Q5. What were the means adopted by Ashoka to spread the message of ‘dhamma’?
Ans: Ashoka appointed officials (called ‘dhamma mahamatta’) to go from place to place and tell people about ‘dhamma’. Ashoka got his messages inscribed on rocks and pillars too, in a language called as Prakrit which was comprehensible to all. Messengers were also send to other parts of the world.

Q6. Why do you think slaves and servants were ill-treated? Do you think the orders of the emperor would have improved their condition? Give reasons for your answer.
Ans: Slaves and servants were ill-treated because their masters felt superior to them. The masters treated them as animals. It was because of the old Varna’ system. The emperor’s orders might have helped to some extent. Ashoka was a king who was loved by his subjects. Moreover his ‘dhamma’ was a realistic innovation.

Q8. Suppose you had the power to inscribe your orders, what four commands would you like to issue?
Ans: To answer this question, use your own imagination and help from friends and teacher.
Some sample points:
(i)Slaveiy be abolished.
(ii)Animal sacrifice be stopped.
(iii)People should not fight among themselves.
(iv)No discrimination be practised based on gender, caste, creed, etc.

Fill in the blanks with appropriate words to complete each sentence.
(i) Ashoka was Chandragupta’s ……………………………….
(ii) Chanakya was …….. ’s minister.
(iii) The Arthashastra was written by………….
(iv)……… was the gateway to the northwest of the empire.
(v)………. were sent as governors to other provincial capitals.
(vi) South India was important for ………….
(vii) Ashoka gave up war after winning over…………
(viii) ‘Dhamma’ is the Prakrit word for the Sanskrit word
(ix) Ashoka appointed …….. to spread ‘dhamma’.
Ans: (i) grandson (ii) Chandragupta
(iii) Chanakya (iv) Taxila
(v) Royal princes (vi) gold and other precious stones
(vii) Kalinga (viii) ‘Dharma’
(ix) officials.

State whether these sentences are true (T) or false IF).
(i) The lions on the currency notes come from the Rampurwa bull capital,
(ii) Ashoka founded the Mauiyan empire.
(iii) Royal princes were sent as governors to provinces. •
(iv)Ashoka gave up war after losing in Kalinga.
(v) Ashoka himself went from place to place to preach ‘dhamma’.
(vi) The ‘dhamma’ also reached other countries.
Ans. (i)—F, (ii)—F, (iii)—T, (iv)—F, (v)—F, (vi)—T.

Q1. Who was Chanakya?
Ans: Chanakya (or Kantilya) was a wise man who served Chandragupta Mauiya.

Q3. Giue one point of difference between empires and kingdoms.
Ans: Empires need more resources than kingdoms do as they are larger,

Q4. Give one point of information given by the Arthashastra
Ans: The Arthashastra tells that the north west of the Mauryan empire was important for blankets, and south for stones,

Q6. What was special about Ashoka as a ruler? [V. Imp.]
Ans: Ashoka was the first ruler who tried to take his message to his subject through inscriptions.

Q7. What change came upon Ashoka after the Kalinga war?[V. Imp.]
Ans: Ashoka saw that there was a lot of violence in the war and many people were killed. So he decided he would not fight any more wars,

Q8.What was the purpose of Ashoka’s ‘dhamma’? [V. Imp.]
Ans: Ashoka wished to instruct his subjects, for which he introduced his ‘dhamma’.

Q1. Write a short note to describe the Mauryan people.
Ans: The Mauryan cities had mainly merchants, officials and crafts persons. In village farmers and herders lived. In forested areas, people gathered forest produce and hunted animals for food. People in different parts of the empire used various different languages. They also probably ate diverse kinds of food and same can be said about the clothes they wore.

Q2. How was Ashoka unique? [V. Imp.]
Ans: Ashoka was the most famous Mauryan ruler. He was known to take his message amongst the people through inscriptions. His inscriptions were in the people’s language Prakrit. Ashoka also remains the only king in history who gave up war after winning one. This he did after he observed the violence in the Kalinga war. Ashoka then became a Buddhist and got the idea of the ‘dhamma’.

The Empire’s capital. The areas adjacent to Pataliputra, the capital of the empire, was under the direct control of the emperor. Officials were supposed to collect taxes from the inhabitants in strict obedience of the ruler’s order.
The Provincial capitals. There were provinces with their own capitals, e.g. Taxila and Ujjain in the north west and central India respectively. There was obviously some amount of control from the emperor in Pataliputra: Royal princes were sent as governors.
Other areas. In the other areas, the Mauryans controlled roads and rivers, , which were vital for transport. Resources, whatever available, were collected as tribute. 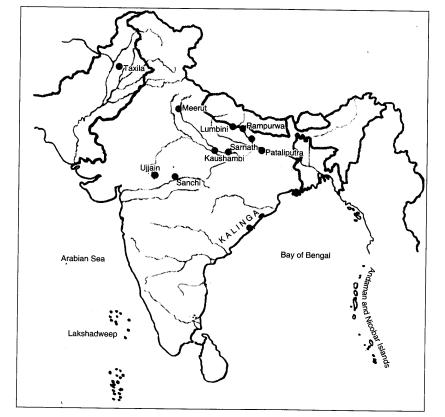