Q1. Answer the following questions briefly:
(a) What is the true shape of the earth?
(b) What is a globe?
(c) What is the latitudinal value of the Tropic of Cancer?
(d) What are the three heat zones of the Earth?
(e) What are parallels of latitude and meridians of longitude?
(f) Why does the Torrid Zone receive maximum amount of heat?
(g) Why is it 5.30 p.m in India when it is 12.00 noon in London?
Answer:
(a) The true shape of the earth is a sphere flattened at the poles. Such a shape is called a geoid.
(b) A globe is an exact miniature model of the earth. It shows the earth in its actual shape, with all continents, oceans, etc marked at their proper places.
(c ) The latitudinal value of the Tropic of Cancer is 23 1/2° N.
(d) The heat zones of the Earth are: the Torrid Zone, the Temperate Zones and the Frigid Zones.
(e) Parallels of latitudes. All of the imaginary circles parallel to the Equator are called parallels of latitudes. These circles have varying centres and all these central points lie on the same line: the axis of the earth.
Meridians of longitudes. All of the imaginary circles perpendicular to the Equator are called meridians of longitudes. These circles have the same centre, which is also the centre of the earth.
(f) The mid-day sun directly faces the area between the Tropics of Cancer and Capricorn. So the heat received is maximum at these latitudes. These latitudes fall under the Torrid Zone.
(g) India and the United Kingdom lie on different longitudes. Each degree of longitudes corresponds to a difference of four minutes. This is because the earth rotates 360° in 24 hours, 1° in 4 minutes. The standard meridian of India is 82° 30′ E, and that of London is 0°. This means a difference of 4 minutes x 82.5 = 330 minutes = 5.5 hours. So when it is 12 noon in London, it is 5.30 p.m. in India.

State whether these sentences are true IT) or false (F).
(i) The axis of the earth is not actually tilted as depicted in a globe.
(ii) The equator is the 0 degree latitude.
(iii) The Prime Meridian is the 180 degree longitude.
(iv) More than half of India lies in the Frigid Zone.
(v) The Tropic of Capricorn does not pass through India.
(vi) The two Temperate Zones maintain a moderate climate.
(vii) The time at a place in the east of Greenwich is ahead of that in Greenwich,
(viii) The earth rotates from west to east.
(ix) The standard longitude for Indian time is the 64° longitude.
Answer: (i) False, (ii) True, (iii) False, (iv) False, (v) True, (vi) True, (vii) True, (viii) True, (ix) False. 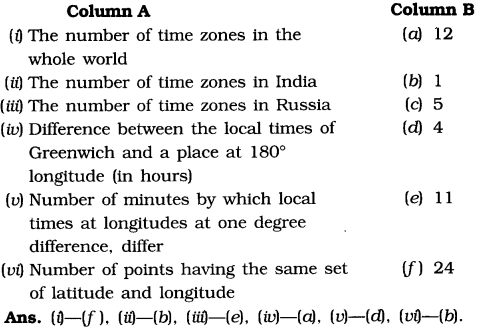 Q1. What is the globe?
Answer: Globe is a true model of the earth. It shows the earth in a small form.

Q2. What are the advantages of the globe? [V. Imp.]
Answer: The globe is small in shape, is convenient to carry and use, and depicts all features of the earth.

Q4. Define latitude.
Answer: One of the imaginary circles parallel to the Equator is called latitude.

Q5. Define longitude.
Answer: One of the imaginary circles parallel to the Prime Meridian is called longitude.

Q8. A particular city lies in the time zone-2. What does this mean?
Answer: This means that the city’s local time is 2 hours behind Greenwich.

Q9. What does the time ‘12 noon’ signify at any place?
Answer: ‘12 noon’ refers to the time when the sun is at the highest point in the sky.

Q2. Why do we have the concept of time zone? [V. Imp.]
Answer: The sun does not shine with the same intensity over all parts of the world at a particular time. If it is overhead at one place (midday), then it does not shine at all (midnight) at the place directly opposite to that place on the earth. So if we have the same time, then 12 noon will mean midday at one place, and midnight at another. To avoid such an awkward system, we have the system of time zones, so that everywhere a particular time means the same stage of the day.

Q3. Write a short note on Heat Zones. [Imp.]
Answer: Heat zones are the different zones of the earth, where the sun’s rays fall differently, thus causing different climate patterns. These zones are called the Torrid Zone, the two Temperate Zones, and the two Frigid Zones. The Torrid Zone is very hot since the sun shines overhead here. The Temperate Zones maintain a moderate climate, and the Frigid Zones are extremely cold.

Q In the grid shown below, ten points are marked (a to j). Using the figures marked with the grid, identify the latitudes and longitudes of these points [V. Imp.] 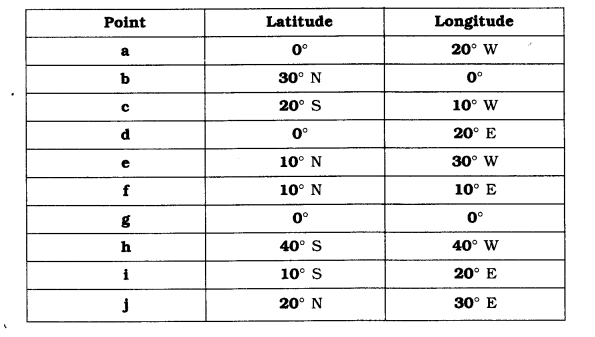